If there is a topic you would like us to cover in one of our upcoming newsletters, please call us at  607-272-1566 or contact us by clicking here.

YOUR INBOX OR YOUR  MAILBOX

It is believed that as early as the 17th century, during the golden years of rug weaving of the Safavid era, Joshagan rugs were woven for export.

Joshagan is located in north central Iran, just north of the city of Isfahan. Its location on an early important trading road leading South from Kashan to Isfahan, made it a principal market center.

The design of Joshagan rugs has remained relatively unchanged for centuries and is fairly easy to identify. The design fits well into our study of  Oriental Rugs by Design.

The most common pattern of the rug is a diamond-shaped central medallion on a deep red field filled with geometric shaped floral motifs that can resemble snowflakes or pebbles. Four-petal flowers are often found within the medallion.

Older pieces may have a navy blue or rust-colored field. Other common colors are ivory and green.

The design of the rugs produced by the weavers of Joshagan are more similar to the rugs from the Hamadan region rather than the close by city of Isfahan. The nearby village of Mehmeh uses a design very similar to the Joshagan and these are sometimes known as Mehmeh Joshagans. Mehmeh rugs usually have a much finer weave.

The foundation (warps-up and down cords and wefts-side to side cords) of the Joshagans are cotton. The rugs are double-wefted with 2 shoots of cotton which are often pale blue or grey.

The pile is tied with the asymmetrical Persian knot and is cut to a low to medium pile. The number of knots per square inch is usually high in the Joshagan rugs.

Dust mites, as you probably know, are microscopic creatures that can cause an array of allergy and asthma problems, especially in children and the elderly. But were you aware we have only known about them since the 1960s? And that they cause allergy problems has only been known for certain since 1988, when research findings were confirmed by the World Health Organization (WHO)?

In the 1960s, early researchers in Holland and Japan had theorized that these insects could possibly be a health concern. No one took them seriously. The process to isolate, characterize, and measure an allergen is complicated and composed of many steps.

In the case of these mites, this process took over 20 years!

WHERE DID THEY COME FROM?

They originated from somewhere near Australia. They were first reported in 1969 in Canada and in 1970 in the USA. By 1980, they started appearing more frequently and by the 1990s they were everywhere.

One explanation for their late arrival may be that our homes prior to the 1950s and 1960s were not tightly sealed and the accumulated house dust with allergens from the mites could escape, not giving them a chance to breed.

They are microscopic insects. The adults have 8 hairy legs and are approximately 0.3mm in length. 7000 of these creatures can fit on a single fingernail!

They are oval shaped and do not have eyes or antennae. They have a mouth-shaped body part in front of the body and their shell is hard and translucent.

There are 2 main species. One prefers a warmer temperature than the other but they are often found living together.


Mated females can lay as much as 60 to 100 eggs at a time, usually in small groups of 3 to 5. A 6-legged larva will emerge first. The 8 legged nymph will appear after the first molt. It takes about 1 month for the 8-legged adult to appear.A male has an average life cycle of 10 to 19 days, while a mated female can last as much as 70 or more days.

It is important to note that dust mites cannot drink and depend on the moisture in the air to survive and breed. During times and areas of low humidity, they tend to band together to try to decrease the surface area of their bodies that are exposed to the air so they will lose less water. If the humidity gets too low, as in winter, the young mites or nymphs will go into hibernation until the humidity rises again.

They can be found in all climates, but warmer, more humid ones will attract a larger number of them. And it is no wonder they choose warm, moist areas such as mattresses and pillows when someone is sleeping on them.

WHAT DO THEY EAT?

They only eat dead tissue and thus are not parasites like other insects. They eat bits of protein they find in the fibers of beds, pillows, carpets, and soft furniture, and can even be found in cars.

Our dead skin cells and those of our animals are their primary food source but they can also live off such items as pet food, cereals, crumbs, fish flakes, and even in birds' nests and in stored grain and straw in barns.

DO THEY BITE OR STING?

Please continue reading here to learn more dust mites and the allergies they cause and how to avoid them.

Spider myths abound! Spiders tend to get a very bad rap. Many of us have a real aversion to them. It could be their hairy legs or maybe just our knee-jerk response to something moving quickly out of the corner of our eye. Or maybe the way they seem to appear from parts unknown and can return just as quickly through the tiniest of holes or cracks.

And, let's face it, no one appreciates walking into a spider's web in a dark and creepy basement or attic!

Have you ever received a bite from some unknown cause and immediately attributed it or had it attributed by a doctor to a spider's bite?

This is one of the more common spider myths and it happens more often than you might think. And yet, it takes an Arachnologist with years of training to properly identify a spider bite. Physicians and even pest control operators rarely get the training needed to do this.

So where does most of this arachnophobia or fear of spiders come from? Is it possible much of the information we have about spiders is really MISinformation? The answer may be a resounding 'YES.'

Below are some spider myths that have been thoroughly debunked by experts and yet still have a way of coming back as truths. It may be enlightening to see how much of this misinformation you may actually have believed!

#1. MOST SPIDERS ARE AGGRESSIVE.

FALSE. This is one of those common spider myths that lives on with the help of scary movies and the media.

The truth is a spider's first reaction to being disturbed or having its web broken will be to run away and hide. Those spiders that live in your house have probably descended from generations of spiders that have never even been outside of the house. The last thing they would want to do would be to attack a human.

#2. SOME SPIDERS ARE POISONOUS TO HUMANS. OTHERS ARE NOT.

FALSE. Almost all spiders have venom. This venom is used as an insecticide to subdue the insects it catches. It is true that some spiders' venom can cause localized pain in humans but the wasp is far more dangerous and can actually cause death in some individuals.

Of the some 50,000 or more spider species in the world, only about 25 have venom that could cause some discomfort to humans. In any given area, there will be zero to 3 of these spiders.

Scientists are now researching the use of spider venom in medicine and as non-polluting insecticides.

#3. SPIDER BITES CAN CAUSE INFECTIONS AND OTHER DANGEROUS MEDICAL CONDITIONS.

UNTRUE. Spider bites are actually quite rare. If you have a bite and cannot find an offending spider or some reliable connection of that bite to a spider, a spider bite should not even be considered.

Certain spiders such as black widows and brown recluses can give serious bites to people that require medical treatment. This is true.

However, these spiders are not aggressive and rarely bite. If they do, they usually don't inject venom. Yet, misinformed reports will claim they are deadly.

This, in itself, can lead to inappropriate medical treatment at the worst or the risk of exposure to toxic pesticides to rid the area of spiders.

#4. YOU CAN ALWAYS TELL A SPIDER BITE BECAUSE THERE WILL BE 2 PUNCTURES.

SOMEWHAT TRUE BUT MOSTLY FALSE. Spiders have 2 venom-injecting fangs and will typically bite with both at the same time.

The difference is, in any spider smaller than a tarantula, the entry points of the 2 fangs will be so close together there is very little if any visible separation. The fangs are so slender and sharp that the actual entry points are all but invisible.

It is also true that a bloodsucking insect can be the cause of a bite as well, since they will usually bite twice.

Mites, ticks, and scorpions, as well as harvestmen, known as 'Daddy Longlegs,' as well as others are also arachnids.

All spiders are arachnids but not all arachnids are spiders!

To find out what other myths are untrue, as well as an explanation of why these myths are so widespread and are usually taken as 'common knowledge,' as well as photos of some common and not so common spiders, please continue reading here.

to check out our latest video -

The Holiday Season is here.

ANOTHER DECEMBER SAVINGS FOR YOU!

HAVE YOUR TILE & GROUT CLEANED

HAVE YOUR TILE & GROUT CLEANED

CALL FOR AN APPOINTMENT IN DECEMBER TODAY!

ABC IS CONTINUING TO CELEBRATE

to bring toys to children

in our community
whose parents may need assistance

during the Holiday Season

HERE IS HOW YOU CAN HELP...

at 130 Cecil Malone Drive in Ithaca for our

Please help us with this worthwhile project.

If you need more info, please call our office at 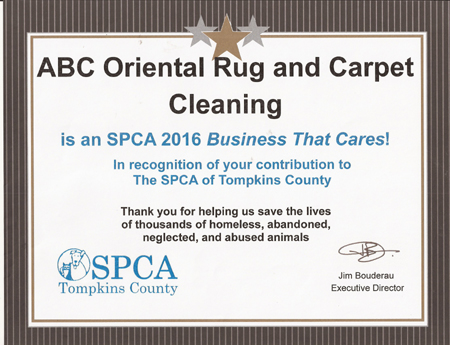