Talish oriental rugs are one of the more important of the antique Caucasus rugs woven by the Talish people in the Southern Caucasian mountain region now known as the Republic of Azerbaijan near the Iranian border.

The Talish (Talysh) tribe dates back to the 13th century and perhaps even earlier. In the 15th century they lived on the Moghan Steppe and the Southeastern Caspian shore. The region was known as Talish even in ancient times and was one of the earliest inhabited regions of what is now Azerbaijan.

The area was known as the Talish Khanate, which was established in Persia (Iran) in the middle of the 18th century and lasted until the beginning of the 19th century. It consisted of the SE part of the modern day Azerbaijan and the eastern tip of NW Iran. The capital was Lenkoran and it was inhabited mainly by the Talish people and the Azerbaijanis. After Persia was defeated in the Russo-Persian War of 1826-28, the Talish Khanate was dissolved and became part of the Russian Empire. 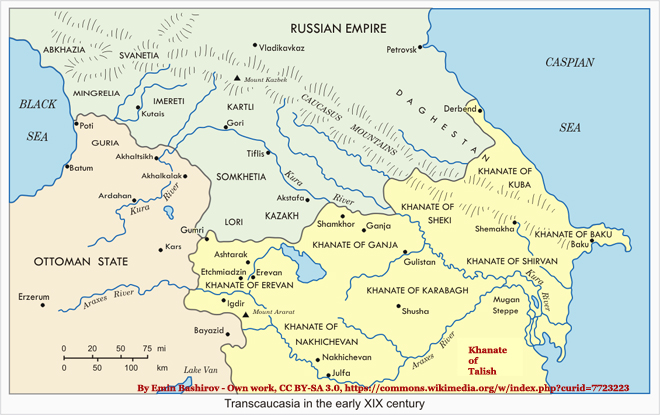 The Talish people are Shia Muslim. As might be expected from their location, their culture and traditions have deeply integrated with the Azerbaijanis. Many of them are bilingual, speaking both their native Talish language as well as Azerbaijani.

The warps (up and down cords) consist of 2 ply twisted and undyed beige and brown wool.

The wefts (side to side cords) always have 2 strands and are usually gray cotton.

The selvages (sides) are typically blue.

The knot is the symmetrical Turkish or Giordes.

The pile is fine wool of medium length.

Talish oriental rugs are one of the easiest to recognize of the Caucasian rugs because of their long narrow shape and distinctive design. Typically, they are 2 to 3 times as long as they are wide with a plain, usually uncluttered field, typically blue or blue/green color.

It is possible, however, to find large and small octagons and cruciform medallions in the length of the field. Star motifs can within an octagonal lattice can also fill the field. Other designs include the use of four flowers between a circular floral form and allover patterns as well.

The field can be surrounded by 4 guard and border strips, with a series of round floral motifs in the wide border. As a general rule, the borders are about 1.5 times the width of the field. Many have a primary border design of a large blossom alternating with 4 florets.

Other common motifs include allover stepped hexagons or diamonds with Laleh Abassi borders, the St. Andrew’s cross separated by octagonal medallions, and the Lenkoran Tortoise motif, shown below. 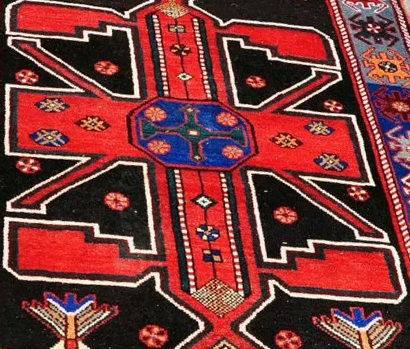 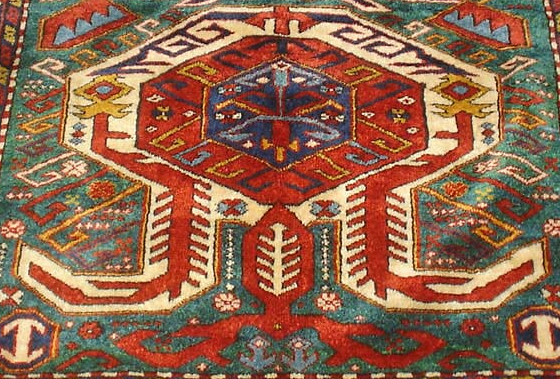 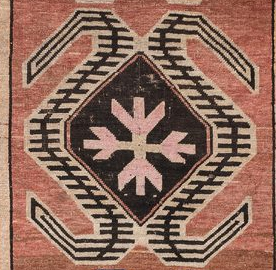 The more highly collectable of the Antique Talish rugs are the ones with plain, undecorated fields.

As with the majority of Caucasian rugs, including the Talish, the stormy and bloody history of the Caucasus region, with its ethnic, culture, and religious strife is reflected in the bold colors and designs used in their weaving.

As we mentioned in other Caucasian rugs articles on this website, the old weaving districts that existed before Soviet rule either do not exist or are no longer associated with rugs marketed in their names. Even though the antique Talish rugs are relatively easy to recognize, it is still very difficult to be exact about the origins of the antique rugs of the Caucasus.

After WWII, the revival of the Caucasian rug industry began. Unfortunately, the appearance of these rugs and the way in which they were produced had changed dramatically. Production went from a cottage industry to large state controlled Russian workshops and factories employing hundreds of weavers.

Cotton foundations were used rather than wool. Synthetic dyes, rather than the original natural dyes eliminated the subtle color variations (abrash) of the earlier rugs. The factory style of production removed the spontaneity of design of the original rugs, which was replaced by scaled layers and symmetry and fewer and more simplified patterns based on a small number of the original Caucasian designs.

In addition, the oil boom has contributed to the dislocation of traditional life, even though those who move to the city seeking new money don’t always get it, contributing to large degrees of differences in income.

Most of the Azerbaijani village women who were the base of traditional weaving at home have gone to work in commercial weaving, since it is one of the only employment opportunities for women that pays an average wage. Unfortunately, commercial weaving companies in Azerbaijan produces inexpensive rugs that are not much different from those produced anywhere else.