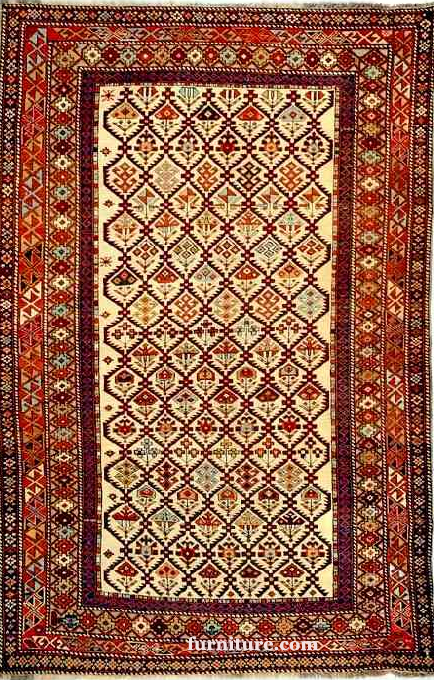 Dagestan Rug-2nd Half of 19th Century

As with many of the Caucasus area rugs, Dagestan rugs were often mislabeled as coming from a major collecting point for rugs, such as Derbend, rather than from the actual area in which they were woven.

Those rugs actually woven in Dagestan tended to be finer than the Kazak rugs of the Southern Caucasus region, but were not as fine as the rugs from the Northeastern Kuba region. 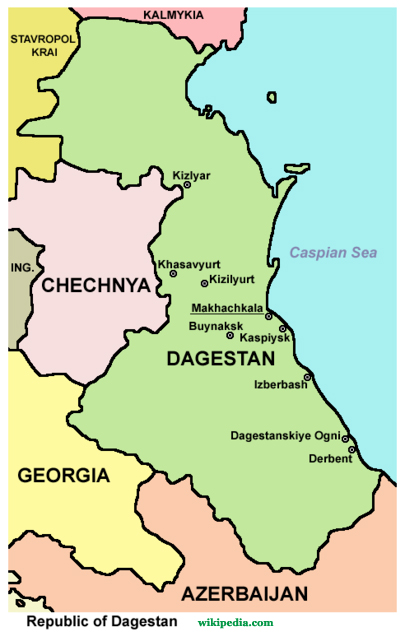 Dagestan can be translated as the 'land of the mountains.' During the 13th to the 19th century, the Dagestan area was Persian. Thus, the rug designs were close to those of Persian rugs.

Dagestan is a republic of Russia located in the Northern Caucasus mountains, bordered on the East by the Caspian Sea and by Azerbaijan in the South. It is a land of very long and better winters with some of the most beautiful scenery that can be found in the Caucasus area. The capital is Makhachkala.

Because of its isolated location, it was not until the 1860s that Russia began to invade the area. What followed was a bitter war that lasted for more than 35 years as the Dagestan people, consisting of a wide range of ethnic groups, rose up (although futilely) to fight the Russians. Because of this war, many of the people moved to what is modern day Turkey and Iran.

When the Russians set up their administrative districts, they combined the mountainous area of what is now Dagestan with the flat area near the sea known as Derbend (Derbent), and called the entire area Dagestan. Today, although Russian is the official language, there are more than 30 commonly spoken local languages. Unfortunately, this region is a very heterogeneous, ethnically diverse, and unstable area.

The antique Dagestan oriental rugs had wool foundations. The warp (up and down cords) were most often gray wool but goat hair was sometimes used for warp threads as well. The weft (side to side cords) could be different colors such as rusty red/brown, blue or white.

An identifying feature common to these rugs was the deeply ribbed appearance on their backs. This was the result of the use of extreme warp depression. (Depressed warps occur when the wefts are pulled tightly from either side, rather than put in with minimal tension. The result is the displacement of the warps into 2 levels.) 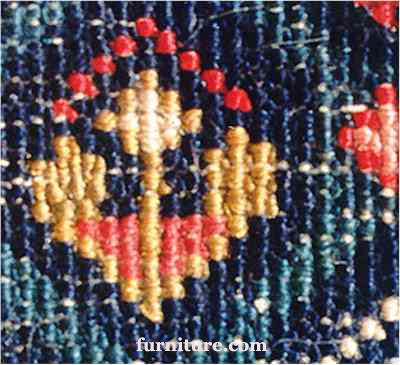 Example of deeply depressed warp from back of rug

The knot was the symmetrical Turkish or Ghiordes knot.

The pile was always wool.

The sides would have a fine selvage, usually colored and made of extra threads. The number and colors of selvages often can be an identifier to the area of origin.

The ends were finished in a narrow woven selvage followed by a knotted fringe.

The antique Dagestan rugs had soft, varied colors, typically blues, reds, yellows, and greens as well as highlights in rare colors such as golden saffron and apple green. A Dagestan rug from the 19th as well as the early 20th century would typically favor shades of blue rather than red.

The antique Dagestan oriental rugs were typically smaller rugs and were used primarily as floor coverings. Their small-scale all over designs with multiple repetitions in fine detail were very well suited to their smaller  size. The design of these rugs resembled jewels or mosaics which produced a very clean and balanced geometric effect.

A central field with repeating geometric figures in a trellis or diamond pattern was common. Sometimes, striped patterns could be found as well. 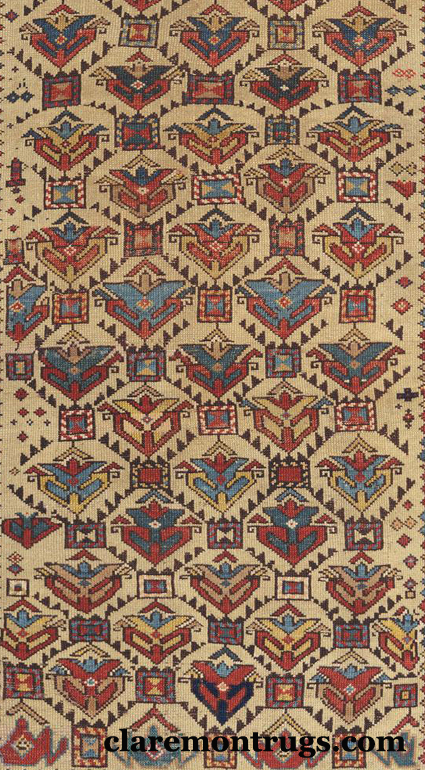 Stripes were to be found in borders, sometimes adorned with floral motifs or  a series of symmetrical geometric patterns.

The latch-hook motif can be found in most Dagestan fabrics and was used for many purposes. For example, it could be used to separate the borders of geometrical shapes and soften the contrast between 2 adjoining fields of color as well. 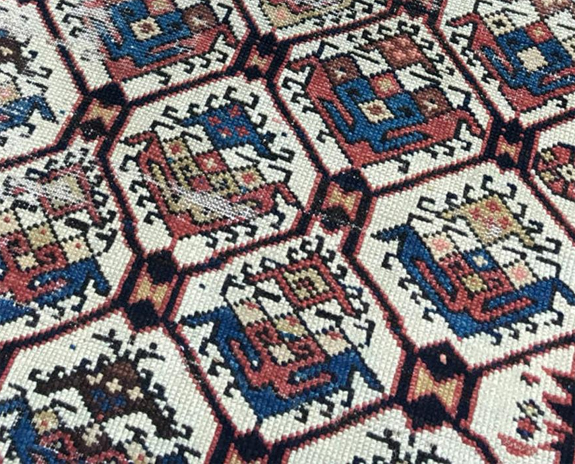 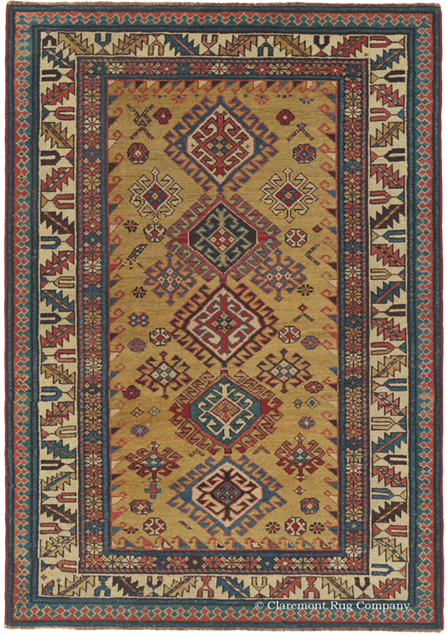 Another common motif was the star medallion.

Very often, the Dagestan rug weavers would add a niche or mihrab religious motif at the top of an ivory-colored field, easily morphing the design into a prayer rug.The field design of these prayer rugs was typically a lattice with different colored stylized plants beneath the mihrab. A common type of Shirvan prayer rug was often mislabeled as a Dagestan in the mid-20th century. 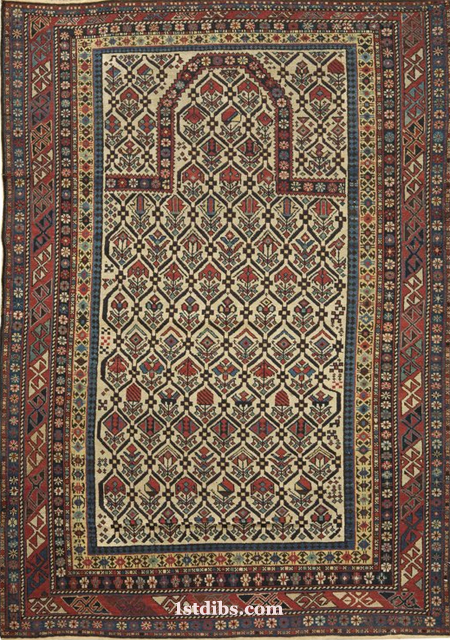 Dagestan rug weavers of today still adhere to the old standards they had before the Russian occupation and are still making smaller rugs. However, the production output is very low compared to earlier days.

Newer rugs, made after 1925, use cotton for the warp. Synthetic colors are bleached and fewer and more simplified patterns are used making the rugs less interesting from an artistic point of view.

Today, new rugs are produced in Pakistan with inspiration from the rugs of the Caucasus using natural plant dyes. They are very durable, have a relatively short pile, and are sold under the name of Kazak.