Gendje oriental rugs (Ganja, Geunge, etc.) were woven in the town of Gendje in the traditional rug-weaving area of the Caucasus Mountains. The name Gendje also refers to the mountainous area surrounding the town.

Gendje is located on the Western shore of the Caspian Sea and is bounded by the Black and Caspian Seas to the East and West, Russia to the North, and Turkey and Iran to the South.

Gendje is situated on the main road connecting Tbilisi (Bilisi), the capital of Georgia (formerly a part of the Soviet Union and now an independent republic), and Baku, the capital of Azerbaijan. This location, between the weaving areas of Karabagh, Kazak, and Shirvan, made it the marketing center for rugs from those areas as well. 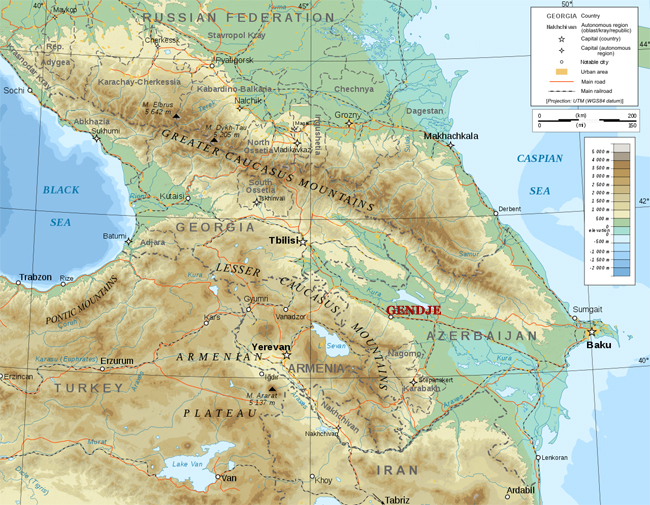 Information on each of these types of rugs can be found below... 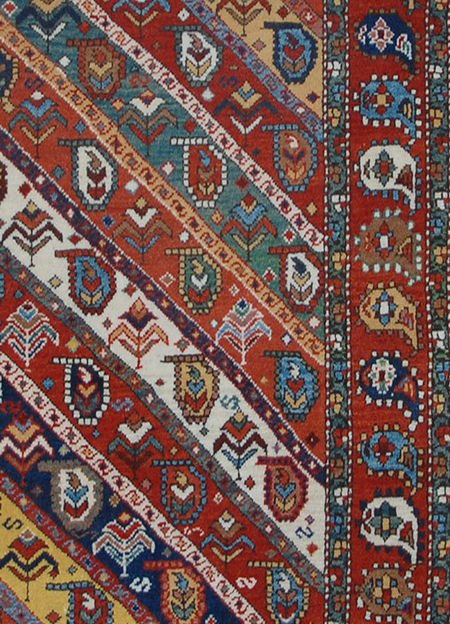 The Fakhrali rugs are prayer rugs and were woven in villages around Gendje. They were usually made in small sizes because they were used in and at religious ceremonies.

There would usually be an arc in the upper part of the field which represented the mosque architectural shape. 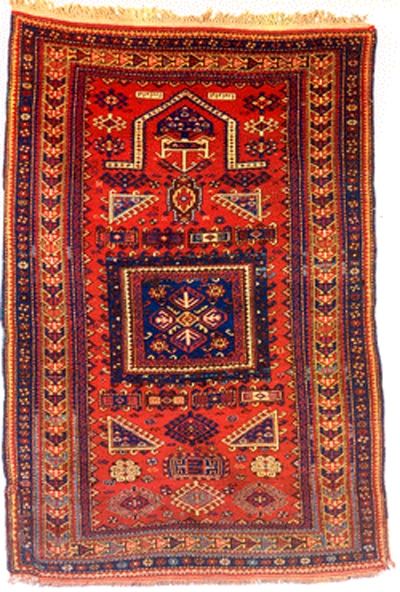 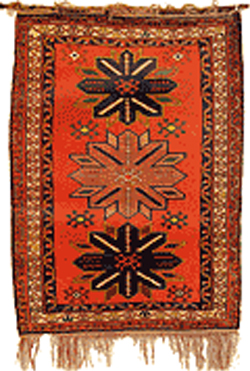 These rugs adopted some elements of the neighboring Shirvan rugs. An ancient figure called the Bendi-rumi can often be found. This figure is in the shape of a rhombus and is filled with geometric floral bouquets. 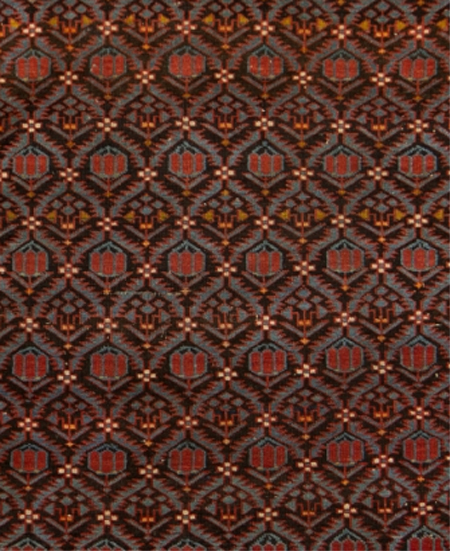 These were medium quality rugs that were widely produced in other regions as well and could often be found labeled as Kazakhcha, Gendje, Fakhrali or Samkhor rugs. 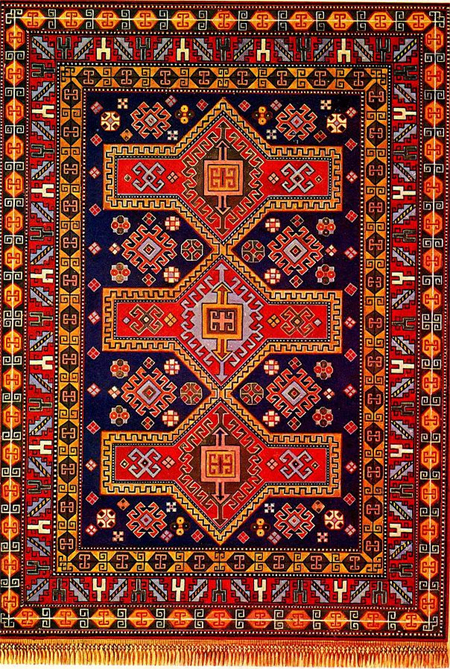 These are the oldest and the most popular of the Gendje oriental rugs and they differ in design from the others. A square located in the center of the field will have medium sized star-shaped medallions located above and below.

They are characteristic of Shirvan and Kuba rugs. Two basic elements found in these rugs are the val, a threshing board and the goosh, a bird. 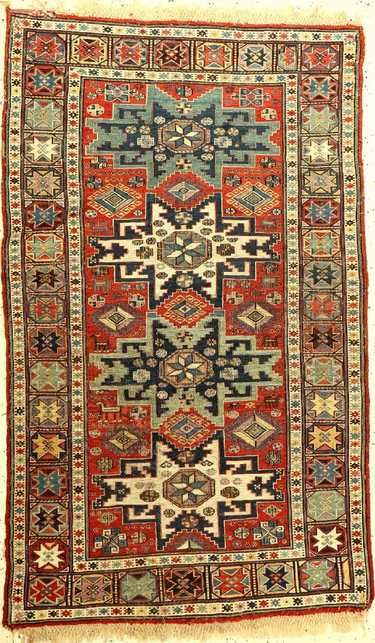 These were also medium quality rugs. They were sometimes labeled as Kazak, Gendje, Caucasus, and Agstafa rugs as well.

Like the Kazak rugs, the Gendje oriental rugs generally had wool warps and long, thick pile. Unlike the Kazaks, the wefts were undyed cotton or pale red woolen wefts.

Most rugs from the Caucasus Mountains use the Turkish or Symmetrical knot.

Often the warps are strongly depressed, giving the back of the rug a corrugated appearance. (Depressed warps (up and down cords) occur when the wefts (side to side cords) are pulled tightly from either side rather than put in with minimal tension. This will displace the warps into 2 levels).

Gendje oriental rugs were usually long and narrow and also included runners. A distinctive feature of Gendje weaving was a pattern of many-colored diagonal stripes featuring small floral designs, sometimes alternating with rows of boteh figures as well as multi-colored octagon borders. These borders could contain many subtle natural hues, giving a sense of harmony and movement to the design. The crab design was frequently used as well.

Another design used for Gendje oriental rugs was a diamond-shaped medallion which would have a white outline that curved outwards and opened up on each vertical side of the medallion.

Yet another of the Gendje rugs contained many x-shaped shield-type designs. 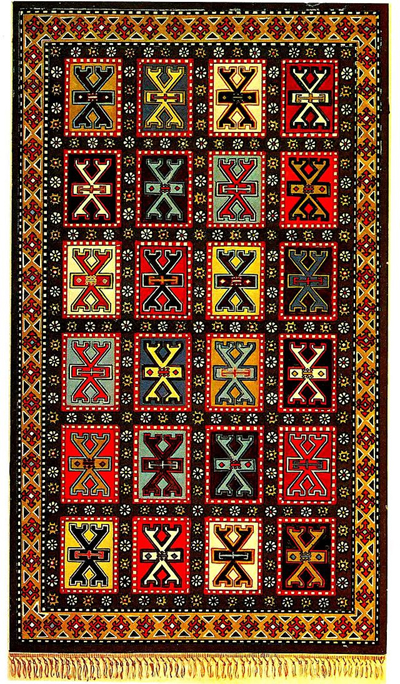 Some Gendje oriental rugs greatly resembled the rugs of their Caucasian neighbors, especially the Kazaks.

WHY HAS WEAVING STALLED IN THE CAUCASUS MOUNTAIN REGION?

THE REIGN OF THE SOVIET UNION

As is the case with the majority of Caucasian oriental rugs woven in the past, very few, if any rugs are woven there today. Most of the Gendje rugs were woven more than a century ago even though the rug weaving tradition goes all the way back to the 13th century!

In the 1860s, with the establishment of the Soviet reign in the Caucasus in Azerbaijan, the quality of rugs fell and the use of natural dyes and hand spun wool decreased. In order to make rugs a profitable export item, home weavers were provided with patterns and wool and the Tsarist officials took care of the sales. The weavers were told what type of designs to use and what type of wool.

During World War II, the weaving there had reached a decline from which it has yet to recover. By the 1960s, except for in some mountainous regions, the tradition of the ancestors was, for the most part, completely lost.

Azeri officials even today impose taxes and fees on rug exporters, and unlike other rug-producing countries, they do not encourage production by awarding subsidies. Pakistan and Afghanistan can produce their own copies of Caucasus rugs at a fraction of the cost.

There are many countries copying Caucasian designs so it would seem there should be at least as many Caucasian weavers as there are imitators. Unfortunately though, an oil boom has dislocated traditional life.

Baku, the city at the center of the boom, now contains over half of the country's population! But those who move to the city seeking this new money don't always get it so there are large degrees of differences in income.

The Azerbaijani village women who were the base of traditional weaving have given up weaving at home and taken to working in commercial weaving. This is one of only a few employment opportunities for women and it pays an average wage.

Unfortunately, commercial weaving companies in Azerbaijan produce inexpensive rugs that are not much different from those produced anywhere else.

THE ANTIQUE RUGS OF THE FUTURE PROJECT

This private project was begun in 2008 in a workshop in the center of Baku city. The goal of the project was an attempt to rediscover the forgotten secrets of the weavers of the ancient Caucasian rugs.

Extensive research was done to revive the traditional designs and ancient rug making methods. Only hand carded and hand spun wool is used. The dyes are natural derived from local plants.

The weaving of these rugs is under strict quality control and each tag on a finished rug has the weaver's name and structural data along with the availability of the historical and artistic analysis of the specific design of the rug.

The project works with local women who are encouraged to weave the rugs at home, improving their social and economic status. Child labor is strictly outlawed.

Other firms have also stepped in to revive the traditional weaving, such as Aygun, located near Kuba. The state-run Azerkhalcha Company, established under the presidential decree in May of 2016, has the goal of reviving Azerbaijan's weaving traditions and reintroducing Azerbaijani rugs to the world.

CAUCASIAN RUG DESIGNS
IN OTHER COUNTRIES

As noted above, several other countries now produce new rugs with Caucasian designs. Some are even on wool foundations and use natural dyes.

Turkey, in the 1970s and 1980s was one of these, along with Afghanistan and Pakistan. Unfortunately, after the 1980s, Turkish rug production was not able to compete with the rugs of the other countries because of rising prices in Turkey. Even so, some new rugs with Caucasion designs can occasionally be found there.

Learn how to remove spots with ordinary household solutions.

We update our Facebook page with our latest discounts and we are also offering exclusive promotions to our Facebook fans.

These are limited and short notice promotions.