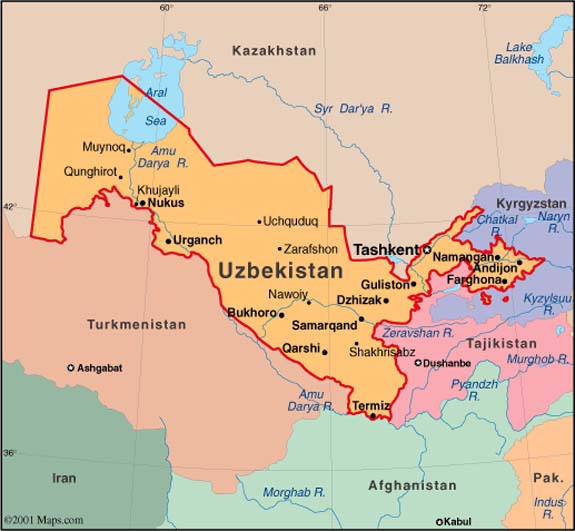 The Bokhara oriental design is the topic of the next chapter in our study of Oriental Rugs by Design. The term 'Bokhara' does not so much refer to a particular rug as it does to a particular design.

The name, Bokhara, comes from an ancient city in the area known as Turkestan. Located on the famous Silk Road, Bokhara has long been a center of trade, scholarship, culture, and religion.

It was an important shipping center in the 19th century and rugs sold commercially through the city of Bokhara were simply designated as ‘Bokhara rugs.’ 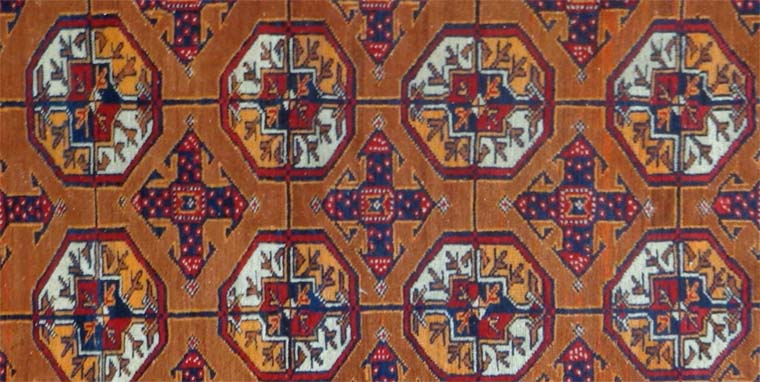 The unique Bokhara oriental design originated with nomadic Central Asia Turkmen tribesmen, primarily the Tekke, whose wanderings took them east of the Caspian Sea and north of Iran.

Towards the end of the 19th century, the nomadic Turkmen tribes clashed with the Russian government which wanted to forcibly subdue them. As a result, the way of life of these tribes changed drastically as did the production of Turkmen Bokharas.

Fortunately, the Turkmen tribes who continued to wander in Northern Iran kept the weaving tradition and many settled in Afghanistan.

Bokhara rugs continue to be woven by the nomadic tribes of people in Central Asia in the area now known as Uzbekistan. Many rely primarily upon the madder plant for the tremendous variety of red and red-brown hues.

Although red and rust fields are the most common colors, they can also have ivory, navy, green, slate, teal, peach, rose or orange backgrounds. 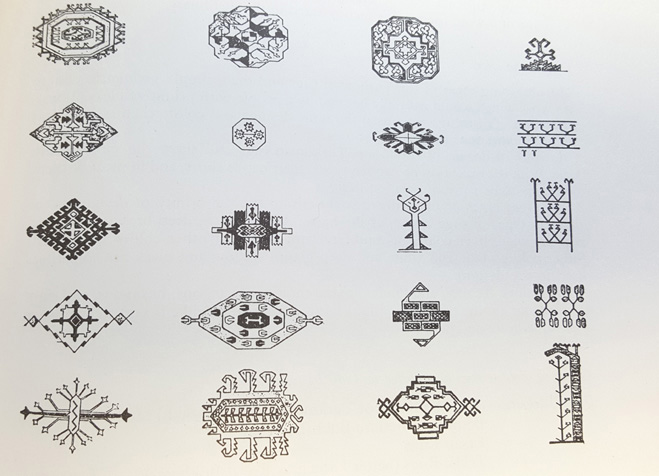 The very popular, easily identifiable and adaptable Bokhara oriental design will almost always have some kind of combination of a row or rows of medallions known as guls (sometimes as elephant’s feet motifs), octagons, or even roses. These guls are commonly dark blue, black or brown with ivory accents.

So popular is this Bokhara oriental design, you can find these rugs in Iran, Afghanistan, Pakistan, and India, and if you are fortunate enough to find one from an estate sale, an old Russian Bokhara. The design can also be found in good quality machine made rugs around the world as well.

The traditional color of a Bokhara oriental design rug is red, but Pakistani and Indian Bokharas can also be found in rust, tan, orange, light and dark blue, green, aqua, and gold.

The more common knot is the Persian, also known as a Senneh knot or asymmetric knot.

It is sometimes possible to distinguish rugs from the different Turkmen tribes (noted below). It must be noted that some gul designs were used by more than one tribe and even, in modern times, by non-Turkmen.

Therefore, since they are really all quite similar and rarely exclusive to just one tribe, it is extremely difficult to be 100% accurate when attempting to identify which tribe a gul actually belongs to.

Please note: The descriptions below only touch the surface of the Bokhara oriental rug design variations. For in depth information, please refer to any number of books by well-known oriental rug authors such as George O'Bannon and Murray Eiland, among others. These can be easily found on Amazon or in your local library.

The Tekke gul design is somewhat different from that used by the other Turkman tribes. It has a distinctive windowpane design where the guls are connected to each other by very thin lines.

Tekke rugs are woven on wool foundations and tied with Persian knots and are some of the best quality. They usually come in sizes up to 6x9.

The Tekke pattern can be found incorporated into many of the rugs from India and Pakistan, but is often modified and combined with other Turkmen design elements.

Tekke rugs can be divided into two types: 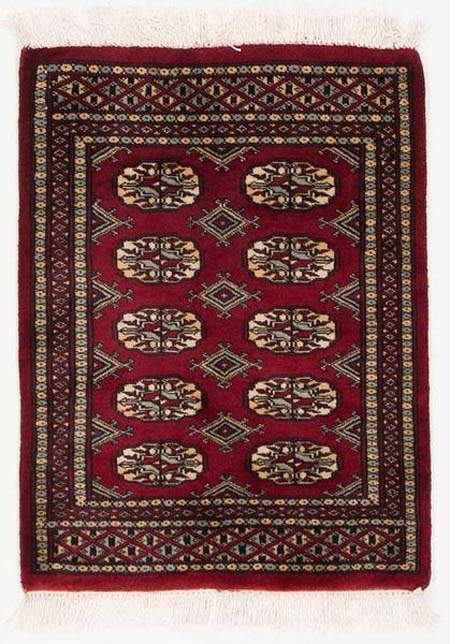 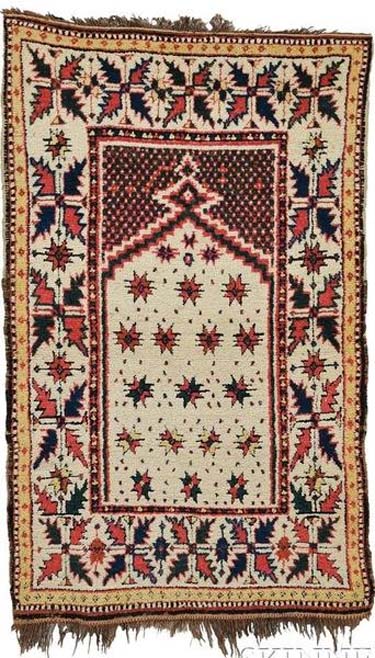 These designs were named after the Yomud tribe, a large tribe found over most of Central Asia. They have a more Caucasian–like design. They can have either Persian or Turkish knots.

In the majority of Yomuds, the pattern is an array of diamonds shapes on the field with inside and outside latch-hook figures.

One common design has a deep red field divided into quarters by a Greek cross. Small white octagons can be found woven in the quarters.

Another less common design has an all over field of a diamond lattice pattern with geometric medallions within each diamond. 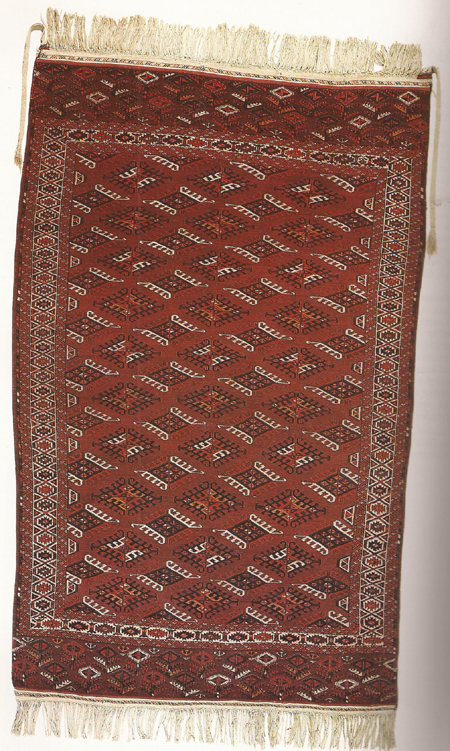 Rugs made by the Salor tribes are of very high quality and are very rare rugs. They usually have 2 or more rows of octagons on red fields.

The unique Salor design is usually red in color and has at least one symmetrical row of guls or octagons. Each octagon has a smaller octagon or diamond within its border which is quartered inside a large octagon. 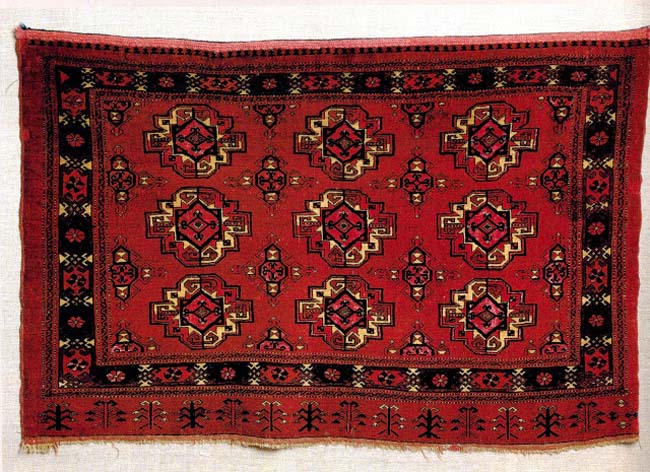 The Ersari design usually features softer reds than some of the other Turkoman rugs. Brick dusty rose and brownish reds are more common. 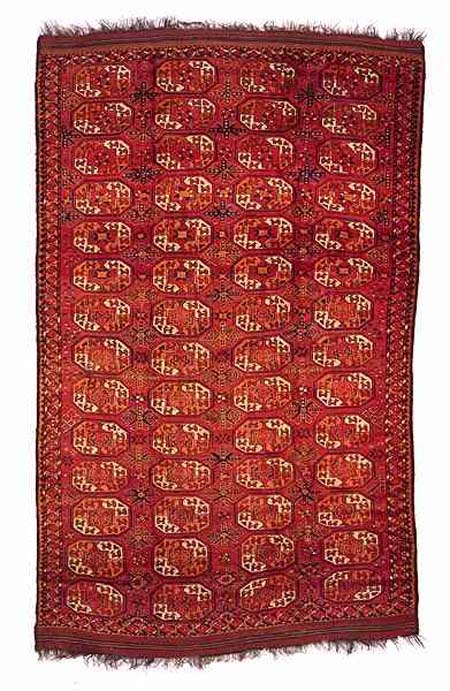 BOKHARA ORIENTAL DESIGNS
AROUND THE WORLD

The Afghan rugs with the Bokhara oriental design, are usually made with the symmetrical Turkish knot and are most often woven by Afghans of Turkman ethnic origin.

They are usually woven on wool foundations (though can be in cotton and silk as well) with a very tight and dense weave. The pile is shorter than that of the Paki Bokhara.

The colors are predominantly rust and reds. The Afghan Bokharas are known for their durability and are usually of high quality.

In America, we usually see the thicker less tightly woven Afghans. They are very similar to Pakistani Bokharas in pattern and colors. 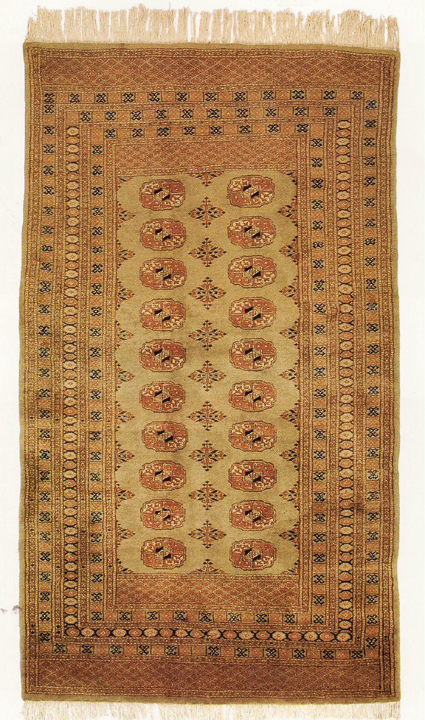 One of Pakistan’s leading exports since the mid-20th century has been hand-knotted rugs. In America, these rugs signify the Bokhara oriental design style. The very first Pakistani Bokharas exported to this country were almost always the Tekke pattern with some shade of red as the field color. Today, they usually have the Tekke or Yomud designs and are woven on cotton foundations.

Shortly after India and Pakistan separated, Moslem weavers from India came together with Turkmen weavers in Pakistan. The Pakistani government set up training programs and introduced modern methods of organizations for the weavers.

Because of its relatively simple repeating design, the first pattern the Paki weavers were trained with was the traditional Bokhara oriental design pattern. From there, geometric styles from the Caucasus and eventually, the curvilinear Persian type, were adopted.

The Pakistani Bokharas not only have a wide range of colors but also a much wider range of sizes. This is because of the Bokhara format which allows for production of different sizes and shapes, including runners and room sized rugs.

Pakistani rugs feature more knots vertically than horizontally. More rows of pile can be inserted because of the finer wefting material that is used. The only problem is that this type of knotting is more suited to geometric shapes and can result in border patterns that are somewhat distorted because the units of the designs are not square.

The quality of Paki Bokhara rugs can vary greatly. Always compare knot counts when looking at rugs from Pakistan. Inspect the surface of the carpet carefully as well. In many Paki rugs, especially those with high pile, the knots are often clipped irregularly during the weaving process. Knots are cut after several rows have been worked rather than after every row and this can create an undulating pile that may not be able to be corrected.

Serging along the sides of the Paki Bokharas often separates from the sides because of the finishing process used. Several rugs may be woven by weavers sitting side by side. When the rugs are finished, they are cut off the loom and the sides are then 'wrapped' to secure the cut edges. The resultant edges are not actually secure. A certified repair technician can re-attach the sides. This is a common problem found in rug cleaning and repair plants. 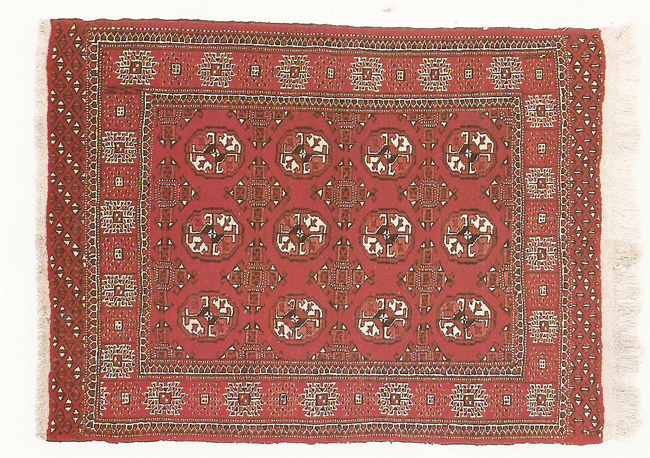 These rugs with the Bokhara oriental design are usually woven by the Turkomen of northern Iran (Yomud tribes). These are mostly in the Tekke design but can be characteristically Yomud.

Generally speaking, Iranian Bokhara rugs can generally be more expensive and cannot compete well with the less expensive rugs coming out of Pakistan.

The export of Bokhara design rugs from Iran is small and also not very popular in the West because of the large amount of white in the design making it look 'busy' and the fact they are prone to excessive puckering.

These rugs sometimes make use of quite a bit of green color which is not widely accepted.

The Russian Bokhara rug uses small quantities of an attractive rich dark green and medium dark blue and exhibit richness and warmth of color in general.

All sizes are produced but larger sizes tend to be long and narrow.

The Bokhara rug design has been around for centuries and is still very popular.

Though the rugs are produced world-wide, most of our Bokhara oriental design rugs in the United States come from Pakistan today. A short discourse such as this cannot possibly expect to teach the accurate identification of the country of origin of a rug with the Bokhara design element. However, for the oriental rug novice, it should be immediately possible now to recognize the design and may encourage further investigation.

Back to Home Page 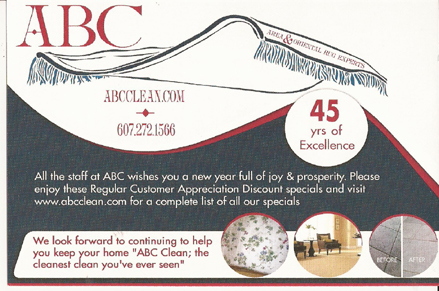