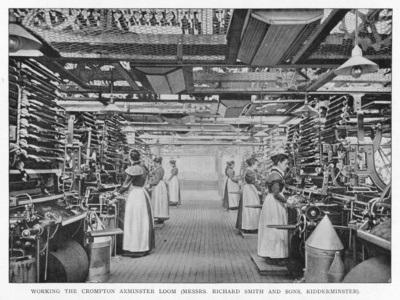 The majority of US carpet manufacture today is highly concentrated within a 65-mile radius of Dalton, Georgia. The majority of the wall-to-wall carpet sold in the US market, as well as a large portion of the world’s carpet production is located here.

But the early beginnings of US carpet manufacture did not occur in the South. In 1791, the US carpet industry saw the first woven carpet mill established in Philadelphia by William Sprague. Many other mills opened in the New England area in the following years.

During the 20th century, the carpet mill produced a variety of carpets and rugs including Axminsters, Wiltons, and tufted carpets. During the Civil, Spanish-American, and the 2 World Wars, it produced products for the military such as gun wadding, blankets, duck fabrics, and even flame-throwers. The company went out of business in 1979. 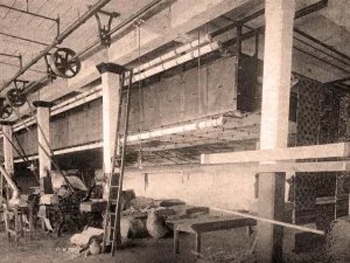 1839 saw the introduction of the power loom invention by Erastus Bigelow. This loom was able to double and triple the production of carpets. The mill was located in Clinton, Massachusetts. Bigelow introduced the first broadloom carpet in 1877. 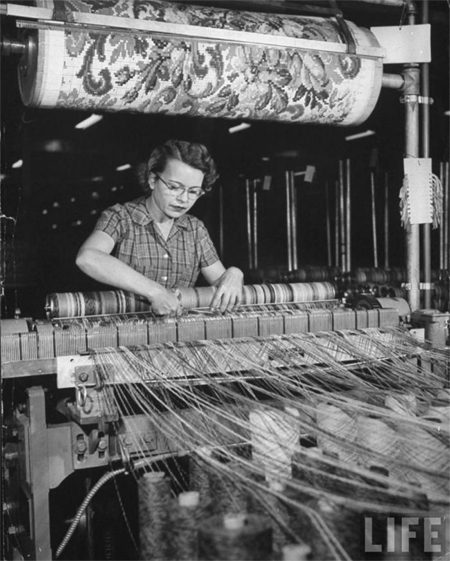 1878 in Amsterdam, New York saw the establishment of a carpet manufacturer known as the Shuttleworth Brothers Company. In 1920, the company introduced a new carpet called the Karnak Wilton, which became immediately successful. By 1920 the Shuttleworth Borthers Company merged with the McCleary Wallin & Crouse company, also located in Amsterdam. The new company was named the Mohawk Carpet Mills.

CARPET MILLS, THE DEPRESSION, and WWII

The US carpet manufacturing industry went through major changes as sales fell off during the mid-1920s and carpet firms such as Bigelow and Mohawk struggled. The Great Depression that followed only made matters worse. During World War II most of the US carpet manufacture mills converted to war production to help stay in business.

In 1928, Marshall Field had a traditional Axminster weaving loom modified to create a machine-made rug woven through the back, just like a handmade oriental rug, with intricate designs and an endless variety of color.

THE SHIFT TO THE SOUTH

The 1950s saw a shift from US carpet manufacture in the Northeast to the building of facilities in southern states such as Virginia, South Carolina, Georgia, and Mississippi. There were many reasons for this move. Labor costs in the region were lower and the older firms could escape unionized work forces as well. There were also occasional incentives offered by state and local governments.

Unfortunately, this move to the South did not solve the seemingly insurmountable economic problems of the carpet industry.

The majority of these companies used weaving technology to produce carpets. Even though the US carpet manufacture industry was using the most up-to-date methods, the wholesale price of carpets rose and the working class market could not afford the wall-to-wall carpet made by the carpet weaving producers. Woven carpets were just too expensive.

AN ACCIDENT OF HISTORY-TUFTED CARPETS and RUGS

In the early 20th century, the tradition of hand tufting was revived in a region of NW Georgia. It started with tufted bedspreads. Raised tufts of yarn were inserted into a pre-woven piece of backing material such as a cotton sheet to form a pattern. The sheet was then boiled and shrunk to lock in the yarn tufts.

Catherine Evans, a rural artisin living near Dalton, Georgia, is credited with the beginning of the art of tufting as a cottage industry. This new industry produced tufted bedspreads that became extremely popular, not only in Georgia but in the NE as well.

The economy from this cottage industry continued to grow in Georgia even during the Great Depression. For the carpet industry in the South, the art of tufting produced a new industry which enabled carpet mills to produce a cheaper substitute for the more expensive woven goods - tufted carpets and rugs.

By the 1920s, most of the US textile production was located in the South. New southern firms were established, such as West Point Manufacturing, Crown Cotton Mill, and American Hosiery Mill in Georgia and Burlington Mills in North Carolina.

By the early 1930s, many of the hand-tufting bedspread mills, called ‘spread mills,’ began to adapt sewing machines that could be used to tuft other textiles, such as carpets and rugs.

THE METEORIC RISE OF TUFTED CARPETS AND RUGS

By the end of the 1930s, some US carpet manufacture firms began to make and use multi-needle machines that could tuft wider backing material more quickly. Small rugs were made by covering the entire surface of a piece of backing material with tufts. Less than 30 miles from Dalton in the town of Chattanooga, Tennessee, firms were founded to build special machines for the tufted bedspread and small rug industry. 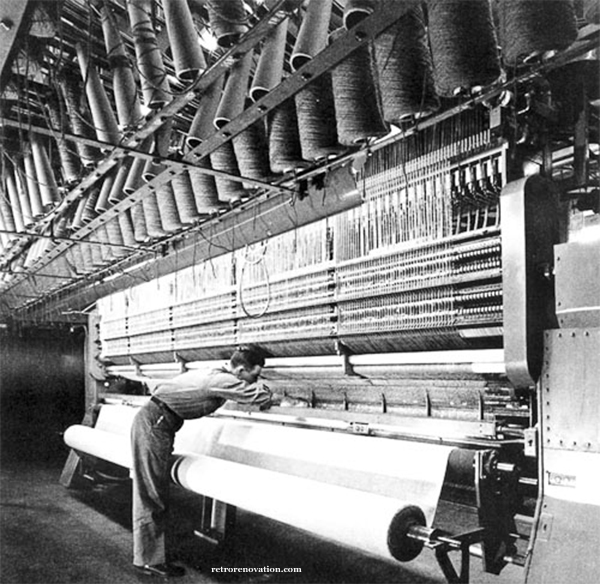 SALES RISE EVEN THOUGH COTTON IS INFERIOR

Cotton yarn was used at first by these new southern tufting mills but it could not compare with wool because it would crush easily and did not wear well. But even so, southern carpet mills were outselling northern mills even though the product was substandard. The reason was the price of wholesale tufted carpet was about half that of woven carpet. It also helped that average consumers could not distinguish between a tufted and a woven constructed carpet by visual inspection.

Tufted carpets rose beyond expectation in the 1950s, even though the use of cotton made a substamdard product. The manufacturers experimented with rayon and staple or chopped and spun nylon but the results were not very successful. Nylon lacked the bulk needed in floor coverings.

The most significant breakthrough in US carpet manufacture came with DuPont Corporation’s invention of bulked continuous filament (BCF) nylon in the mid-1950s. Similar products were introduced by Monsanto later on.

Bulk continuous filament can be described as one long continuous strand of fiber used to make a section of carpet, while staple fibers are shorter, usually only a few inches long, which are twisted together to form longer strands. Today, carpet manufacture can use both BCF and staple fibers, depending on which one is more advantageous for a particular style of carpet.

Dupont's BCF nylon made available for the first time a luxurious quality, durable carpet, similar to wool, which was more economical to produce and could be offered to the consumer for less money. This less expensive, low pile height, loop construction carpet was a welcome big seller!


Eventually cotton completely lost favor with the mills and wool, polyester, nylon, rayon and acrylic fibers were introduced over time. Nylon was first introduced in 1947 and dominated the market. Polyester was first used in 1965, followed by polypropylene (olefin) shortly after. 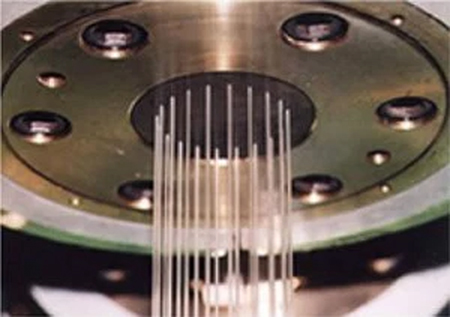 SHIFT FROM WOVEN TO TUFTED

As of 1950, only 10 percent of all carpet and rug products were tufted, while 90% were woven. Around 1950, man-made fibers, new techniques, equipment, and backing became available. Today, tufted products are more than 90% of the total production of US carpet manufacture, 2% are woven and the rest are knitted, braided, hooked, or needle-punched.

The woven carpets and rugs did not just disappear, because high-end consumers still sought them and woven products still dominated specialty commercial markets such as hotel lobbies and casinos. But tufted carpet achieved total dominance of the residential carpet as well as the residential flooring market in general.

US CARPET MANUFACTURE FROM THE 1970s to TODAY

The 1970s through the early 1990s saw many changes in the carpet industry. Growth slowed and attention to cost became essential.

In the beginning, the US carpet manufacture of tufted carpets was a decentralized one with hundreds of small firms, the majority of which depended on independent mills for yarn spinning and independent commission finishing firms for dyeing.

Though some firms adapted by bringing yarn spinning and finishing dyeing in-house, utilizing vertical integration to save their companies, many others went out of business. In the early 1970s, there were 400 mills but by the early 1990s, only 100. 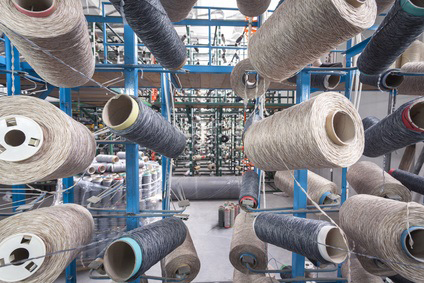 The Dalton area is known as the ‘Carpet Capital of the World.’ Carpet firms of today have diversified into the production of other flooring surfaces such as tile, wood, and vinyl, etc. 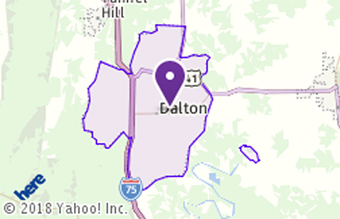 Top of US Carpet Manufacture