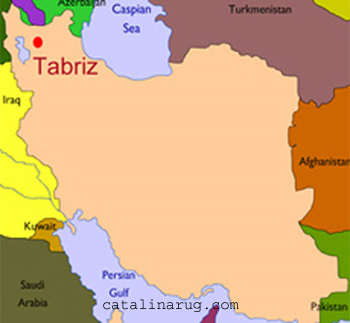 Map of Iran with Tabri

Tabriz oriental rugs are woven in Tabriz, the 2nd largest city in Iran. It is the capital of the East Azerbaijan Province in NW Iran and is located close to the Turkish border. Rug weaving in Tabriz has a long history. It is actually one of the oldest weaving centers and has been a center of rug production longer than any other city in Iran.

The peak of the Tabriz weaving production was in the 15th and 16th centuries and its weavings were highly sought after both in Europe and the West. The second half of the 19th century saw another surge in outstanding Tabriz rug production. The 1970s evidenced the introduction of the Taba Tabae, also known as the Taba Tabriz. After 1980, a different style of Tabriz rugs began to be produced which is completely different and finer than the Taba Tabriz.

The task of identifying Tabriz oriental rugs can be very difficult due to the staggering diversity of the designs, construction, and materials that make up Tabriz rugs, as well as the varying quality of the rugs. This can be explained by the sheer enormity of the rug making industry in this region. For example, the pile can be thick or thin and the design geometric or floral. They can be found in almost any size. In addition, the quality of these rugs spans the gamut from very bad (low knot density) to some of the finest rugs in the world. 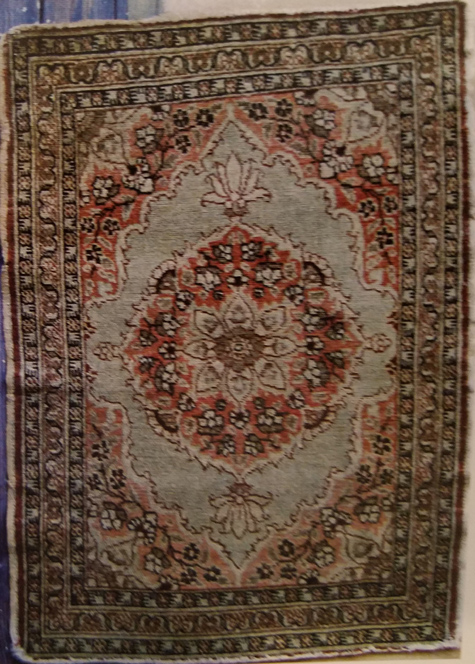 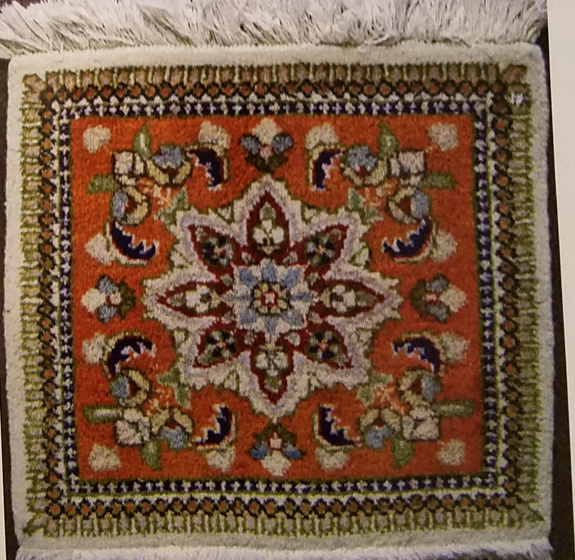 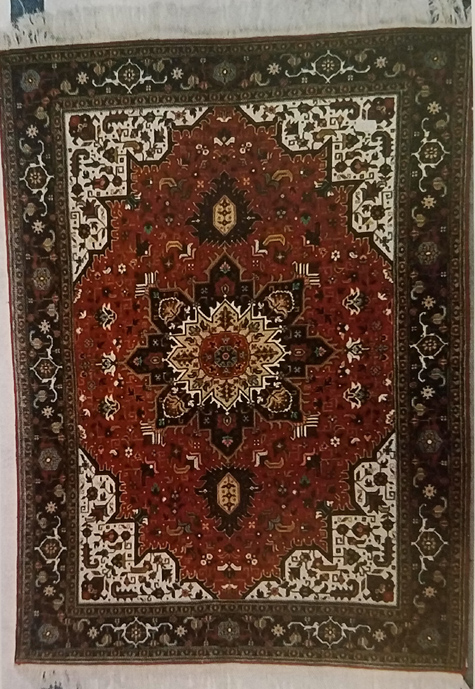 To help identify Tabriz oriental rugs, we have found this task easier if we look at the rugs from 3 time periods, the antique Tabriz, the 1970s Taba Tabriz, and the Tabriz of the 1980s to the current time. The last 2 are more easily identifiable.

The Tabriz rugs have many similarities and some differences as well:

The knot in all Tabriz oriental rugs is the symmetrical or Turkish knot. This can be explained by the fact Tabriz was once the capital of the Ottoman (Turkish) empire and its predominant population is of Turkic people.

The knot is tied onto a cotton foundation consisting of 2 shoots of cotton wefts (side to side threads) and depressed** warps (up and down threads that form the fringes). In the rugs from the 1980s to the present, dark gray or black wefts may be used and the warps may occasionally be silk.

(*Depressed warps occur when the wefts are pulled tightly from either side rather than put in with minimal tension. This will displace the warps into 2 levels which may or may not be visible from the back of the rugs. This results in a more dense weave and can be found in many city rugs especially Persian). 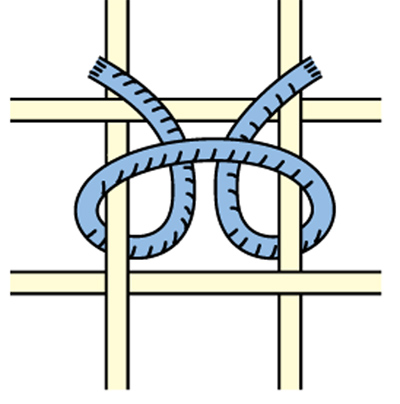 1980s to Current Tabriz rugs use wool and some silk outlining, small areas of silk pile or a combination of wool and silk. Some of the finest rugs can even be found with 18 or 24 karat gold threads woven into the foundation. The signature of the weaver can sometimes be found woven into a part of the rug’s border as well.

Tabriz-signature of weaver in border

In Tabriz oriental rugs, as well as most Persian rugs woven since the 1980s, the wefts (side to side foundation cords) do not wrap around the terminal warps (top to bottom foundation cords), causing the overcasting on the sides to pull away from the body of the rug. This is why one can often find vinyl strips sewn on the sides of the rugs at the edge to protect the side cords from separating. Unfortunately, even with the vinyl strips, the overcasting is subject to separating from the body of the rug. 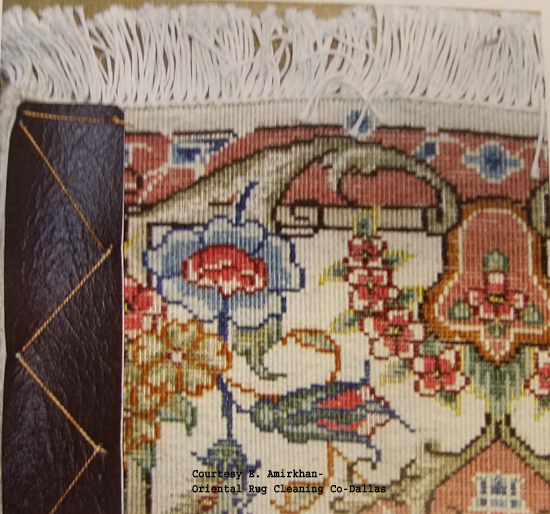 Vinyl Strips on side of Tabriz Oriental Rug - Back Side

Antique Tabriz rugs usually have a double-corded side which is wrapped in cotton or wool, though a few may be found with single-corded sides.

1970s Taba Tabriz have a single thick cord on the sides which is overcast in wool.

1980s to Current Tabriz rugs have a single cord overcast in wool.

Antique Tabriz rugs had plain fringe on the ends.

Tabriz rugs woven after 1980 may have plain fringe secured with a chain stitch on the ends. Some can be found with a plain kilim (a flat area of varying size woven at the end of the rug) at the ends, or a kilim with small repeating motifs of knotted wool.

Antique Tabriz rugs usually had a floral design with palmettos and assorted flowers with a medallion in the center and corners filled with quarters of medallions. Many of the great poets of Persia have been important influences in the rug weaving design of Tabriz. Their poems could be depicted in the rugs or their poetry would be woven into the borders of the rugs.

In those Tabriz rugs woven after 1980, the design can be floral or geometrical.

The most common designs are the Herati (mahi), a floral filled field (nakhcheh, and the Heriz. Popular motifs include the four seasons describing the life of the Persian farmer during spring, summer, fall, and winter. Weeping willows (a symbol of love), oaks (representing strength and courage), and the pomegranate (symbolizing abundance and luck) are some of the many motifs that can be found. Figural and pictorial rugs, as well as floral rugs and prayer motif design rugs abound. 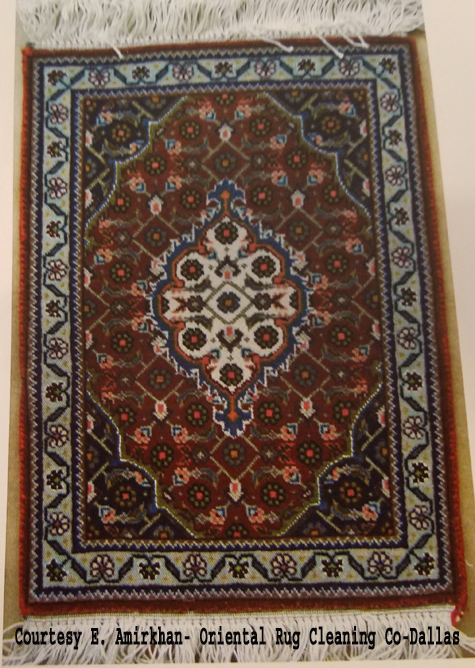 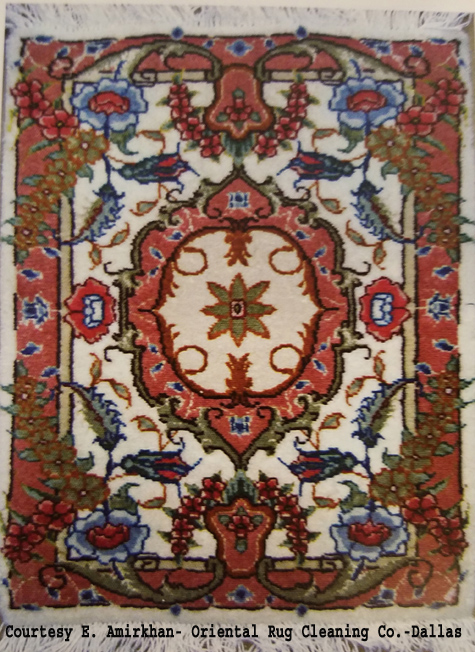 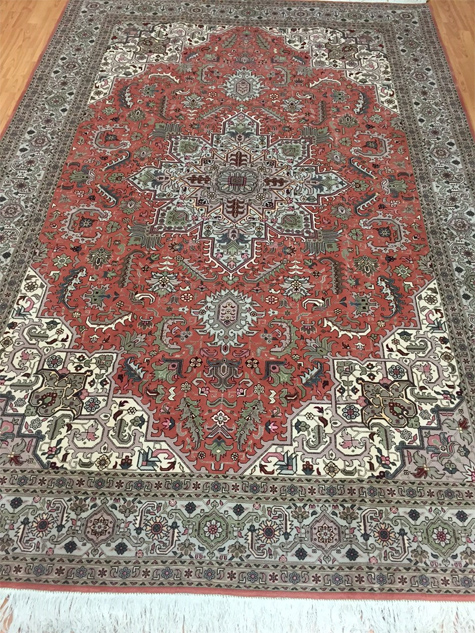 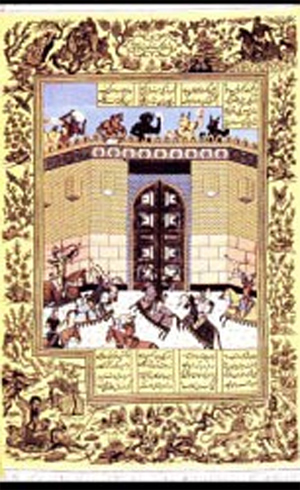 Antique Tabriz rug, depicting the lyrics and paintings from Shahnameh, the Book of Kings by Ferdowsi. 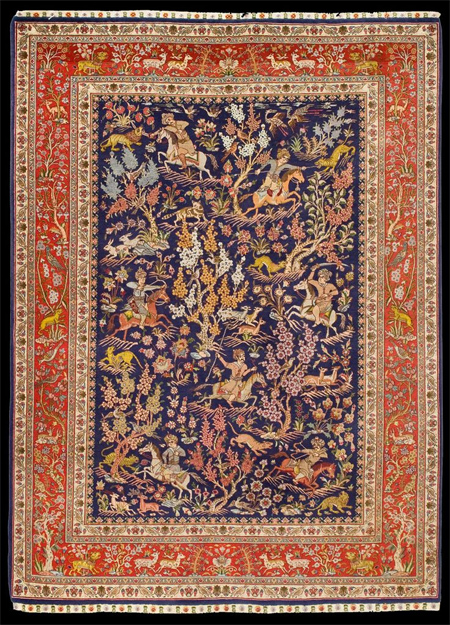 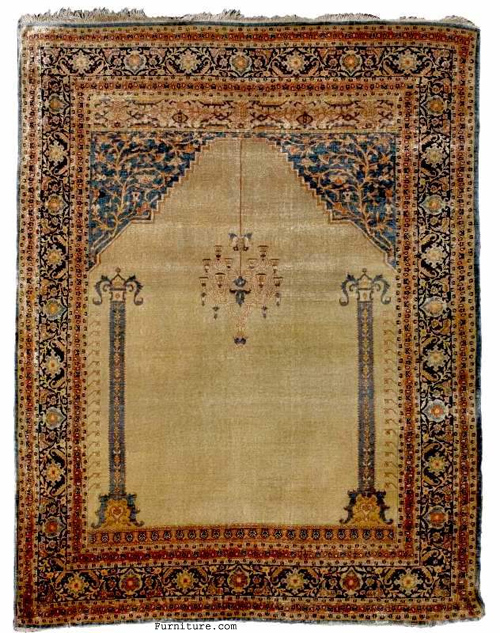 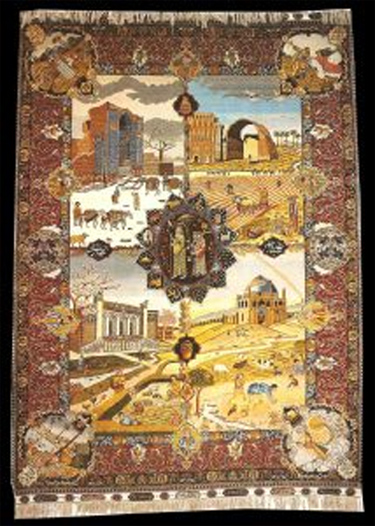 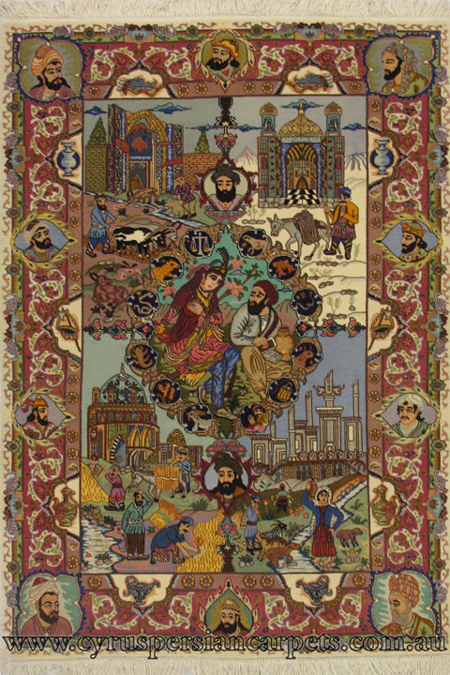 Antique Tabriz rugs were usually tan and rust (but could come in a variety of color from rich jewel tones to subtle pastels) and came in all sizes.

After 1980s, all colors and all sizes, including round and square can be found. Soft green and blue and brown can be found in newer rugs.

The dyes in Tabriz rugs can fade and are unstable when wet and are subject to dye bleeding. As an example, the yellow component of the brown dye used in the outer borders can bleed into the fringe when wet. 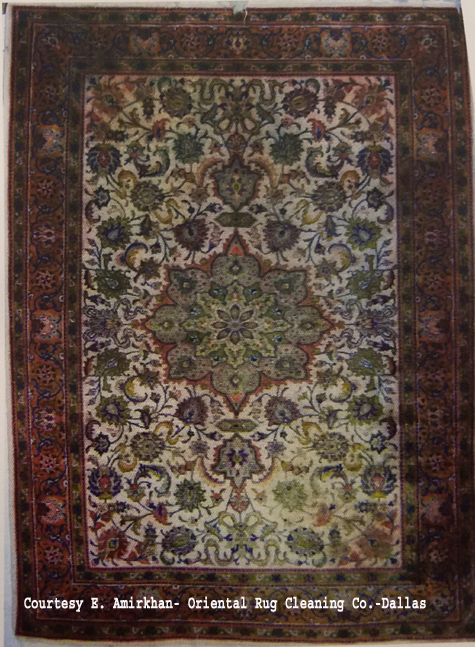 Because of the number and diversity of rugs produced in Tabriz, there is, as could be expected, a wide range in the quality of the rugs. A lot has to do with supply and demand. Because Tabriz is a centuries-old trading center, the commercial demand can determine the quality produced. Tabriz oriental rugs can vary from a simple and cheap bazaar example to an excellent hand-crafted piece of art and one of the finest rugs in the world.

Please feel free to call our office with any questions about Tabriz oriental rugs or any other rug, oriental or not. Our staff is there to help you in any way we can. We offer advice as well as a full-service rug cleaning plant and repair facility. You can reach us at 607-272-1566 from 8 to 5 Monday through Thursday, 8 to 4:30pm on Friday, and from 10 to 1 on the 1st and 3rd Saturdays of each month.

Tabriz - The City and Its Rugs