Silk production goes on today in much the same way it did centuries ago. But there is a dark side. This process does pose an ethical dilemma to the growing number of people concerned with the humane treatment of animals, especially those exploited for monetary reasons.  Even if those animals happen to be insects.

THE LIFE CYCLE OF THE SILK MOTH 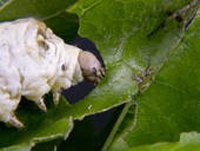 Today, especially in China, large silkworm farms may distribute already incubated eggs to individual silk farming households, who will have prepared a clean, dry, and well-ventilated area for them to feed and grow.

After about seven days, the eggs hatch and the silk farmers painstakingly feed the baby caterpillars around the clock with cut up mulberry leaves (the only leaves the Bombyx mori feed on). Every 3 to 5 days, the silkworm caterpillars will go into a dormant stage that lasts from 1 to 2 days.

The silkworm will go through 5 of these dormancy periods or ages, shedding their skin and multiplying in size each time, actually increasing in weight about 10,000 times. It may take a ton and a half of fresh mulberry leaves to feed enough worms to make 50,000 cocoons, which is the required amount to make one silk sari!

After the 5 ages or stages are completed, the now engorged silkworms will begin to climb cocooning frames the household has prepared for them. One silkworm caterpillar can spin long continuous strands that could stretch for miles. After spinning and sealing its cocoon, the caterpillar will morph into a pupa and, in about a week, it will change into a moth.

When the moth is ready to emerge, it can secrete a yellow fluid that will allow it to make an opening in the cocoon and it will slowly climb out. Because the domesticated Bombyx mori moth is blind and flightless, the female must secrete a hormone that will attract a male.  They will mate and the process will begin again.

SILK PRODUCTION - THE DARK SIDE

But the life cycle of the majority of moths whose cocoons are used for pure silk production will be violently interrupted! Their cocoons must remain intact and the moth cannot be allowed out!

The cocoons must be 'harvested' by the family while the silkworms are still in the pupa stage. In order to prevent the pupa from becoming a moth, the cocoons must be boiled, steamed or baked in a process called 'stifling'. After stifling, the end of the silk thread is located and the cocoon is unwound mechanically or by hand.

In order to produce fine pure silk, we as humans have domesticated the Bombyx mori moth into one that is blind and cannot fly. She lays eggs once and then dies. We kill her offspring before they mature. And this has been going on for over 5000 years.

OTHER TYPES OF SILK PRODUCTION

There are other silk processes, which use different species of silkworms to produce what is known as wild silk. The real difference between the wild silk and the domesticated silk is that the wild silk moths are allowed to breed and lay eggs. The larva then feed on leaves in trees (usually oak) and form cocoons. This eliminates the necessity of the constant hand-feeding of the larvae. However, the cocoons are still collected by hand and go through the same stifling process as the domesticated cocoons. The silk from these varieties of moths is not as fine as the ones known as pure silk which use the Bombyx mori.

There is also a type of silk called Ahimsa Silk or Peace silk.  No stifling is performed so all the moths are allowed to emerge from their cocoons and breed. This type of silk is often seen as a more ethical solution. However, the dilemma here is the question of what happens to the adult moths, who are only allowed a brief period to mate. Then, after mating, the female moths are put into trays to lay eggs and the males are used again and again to mate. They are kept in a refrigerator in a semi-frozen state. Eventually, after their virility diminishes, they are thrown away to die a slow death. The females are crushed and put under a microscope to make sure they are not diseased. If they are found to be diseased, all their eggs will be destroyed.

THE BEAUTY OF SILK – AT WHAT PRICE?

Who doesn't appreciate the beauty and luxury of silk? With its sheen, its affinity for dyes with vibrant colors and its resilience, this lightweight and glorious textile has been prized for its elegance for thousands of years. But at what price do we claim this prize?

WHAT IS THE ANSWER?

Do we go on killing billions of innocent insects or do we somehow stop silk production, which actually accounts for less than 0.2% of the total textile production in the world.

But what about the fact that silk production is a very important tool for economic development, especially in the rural areas of developing countries? Labor-intensive, high income-producing silk production (sericulture) can be found today in over 40 countries. The majority of households involved in this economy come from Asia with China employing over 1 million people. India is second in production, employing over 700,000 households, but India is the largest importer and consumer of silk.

It may be the answer can only be a personal one to avoid silk and pass the information on to others who may not know how silk is produced.

We could instead choose to promote man-made fibers such as nylon, olefin, polyester and rayon instead of silk. But even that decision can constitute an ethical dilemma. These fibers are made from chemicals and petroleum derivatives and we are becoming more and more aware of the effects of these products on global climate change and environmental pollution.

WHERE DO YOU STAND ON THIS
ETHICAL DILEMMA?

Perhaps the answers may not be easy for us but if we can teach our children to have respect and a profound appreciation for all living things, no matter how small, perhaps they will be able to find a solution to this and other such ethical dilemmas.