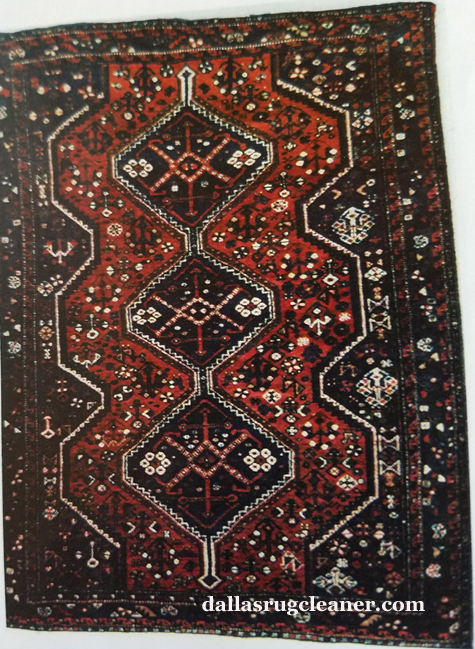 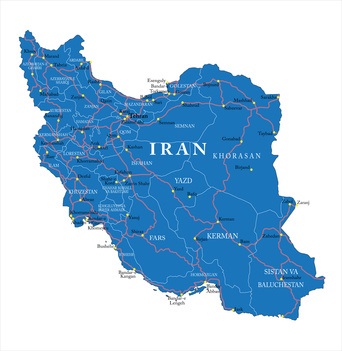 Map of Iran-Shiraz and Fars Province

Shiraz Oriental Rugs are woven in and around the city of Shiraz, the capital city of the Province of Fars, located in southwestern Iran. The city has been a center of art and culture since Neolithic times (also known as New Stone Age) and was the capital of ancient Persia. Shiraz is and has been a dominant market center for rugs woven in the Fars area.

Though a rug labeled ‘Shiraz’ may actually be woven in the city of Shiraz, it is more than likely to have been woven in outlying villages by both village and settled tribal nomadic weavers. The term 'Shiraz' can actually be used generically to describe rugs made anywhere in the Fars region.

The Shiraz weavers also produce a large number of flat-woven rugs or kilims (handwoven with no pile, usually reversible). Standard Shiraz designs, typically featuring a column of large medallions, can typically be found in these flat-woven rugs. 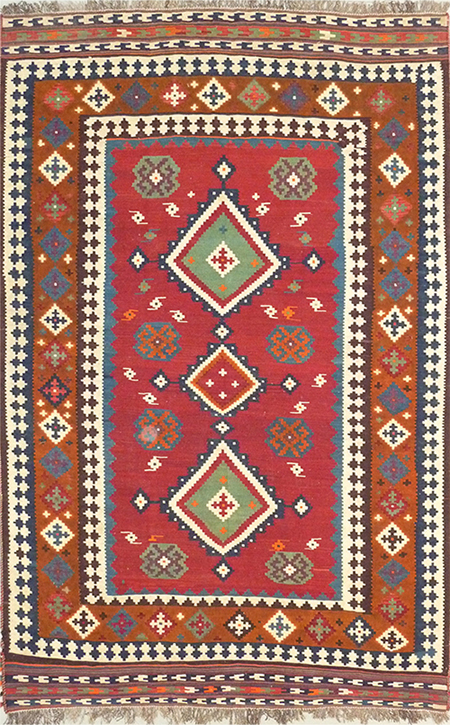 The warps (up and down cords) are usually made of wool, though sometimes goat hair, and can be a natural color or dark brown. The wefts (side to side cords) consist of 2 wool (sometimes goat hair) dark brown or dyed red cords after every row of knots (double wefted). Newer Shiraz rugs can also be found woven on cotton foundations.

Shiraz weavers using fixed looms typically to produce a bit larger and often  coarser rugs than their tribal counterparts. The rugs often have irregular shapes and can also tend to pucker.

The hand-knotted pile is composed of wool with a medium size pile height.

The knot can be asymmetric or symmetrical. The knotting can vary from medium to coarse and even to very loosely knotted rugs.

Both ends consist of knotted fringe. Sometimes there will be a selvage (flat area) at the ends before the fringes. Thick strands of red, white, and blue yarn are often woven together in a coarse check pattern on this narrow selvage.

The sides consist of a single cord overcast in dark brown goat hair or overcast in a barber pole design. Sometimes the edges are strengthened by using additional lengths of the yarns used for the pile, which are laid along the sides and bound in by the overcasting. An ornamental use of this type of overcasting occurs when loops of these added strands are left outside the overcasting, and then cut, creating tufts along both sides of the rug. 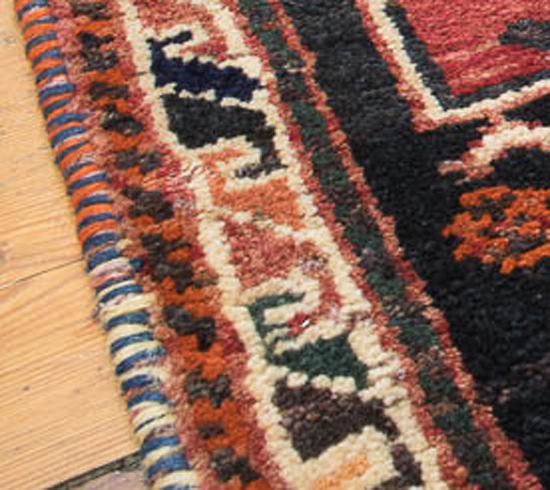 The older rugs had a somber color palette, mostly browns and reds. Rugs woven (after 1980) which have bright red fields may have dyes that are not colorfast. Newer Shiraz rugs can also contain other colors such as khaki and soft green.

Shiraz rugs are usually no larger than 6x9 feet. 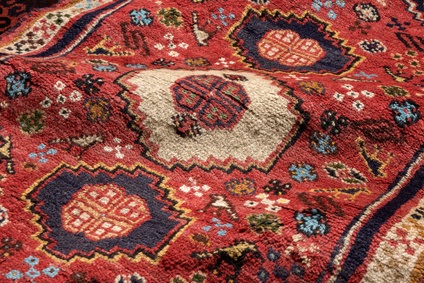 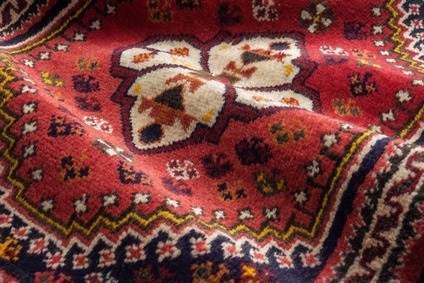 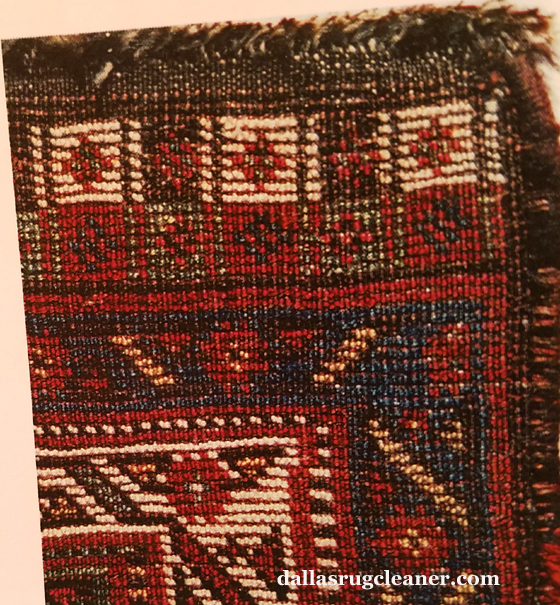 The design of Shiraz oriental rugs is characteristically geometric, though some motifs such as the pear can be a bit more rectilinear.

A common design would be 3 linear medallions on a dark blue, brown, red or black field. Sometimes one large medallion will be featured in the center of the rug. Pole medallions are common. Fields covered with boteh motifs are common. Some fields can be found filled with repeating narrow perpendicular or diagonal stripes and can also be populated with figures, trees, and animals. 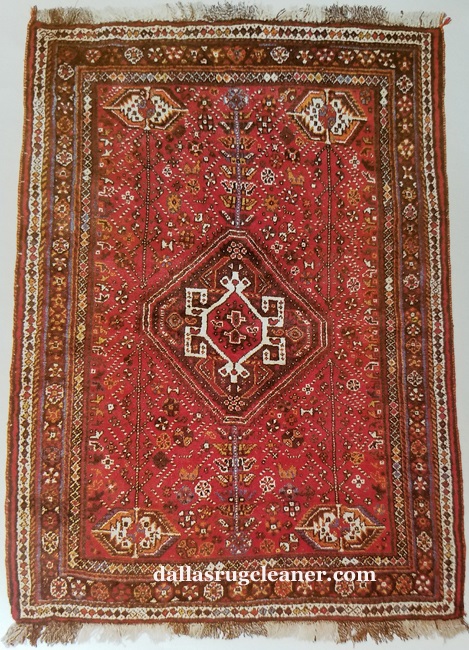 The borders of Shiraz rugs typically consist of a large band, richly ornamented with palm and pine leaf designs, flowers, and vines, with smaller borders enclosing the larger one. Diamond-shaped lozenges are often used as the primary motif as well. The smaller bands can contain waving vines or even x-shaped motifs with diamonds. A particular type of Shiraz rug has a plain-colored field and multi-colored stripes in the borders with no other design.

Cyrus the Great was a revered king of ancient Persia. His white horse, a special military breed, is often depicted in Shiraz rug design. The Shiraz weavers also use an angular shaped bird motif depicting nightingales, symbolizing contentment and happiness. They are the only weavers using this motif. 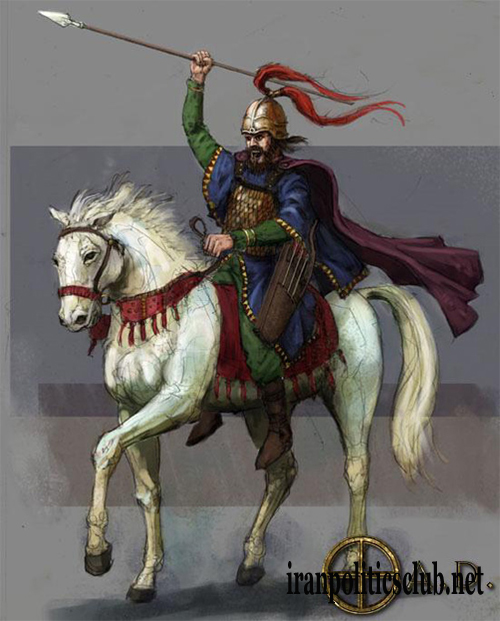 Cyrus the Great on his White Horse

Because of the wide distribution of weavers of Shiraz oriental rugs over the Fars area, these people have been exposed to all types of decorative influences which have resulted in a wide variation of designs.

Fortunately, even though the Shiraz oriental rugs may be similar to the other tribal rugs, the weavers have managed to retain a sense of originality and distinctive charm of their own in their rugs. The Shiraz design is often reproduced by India weavers today. 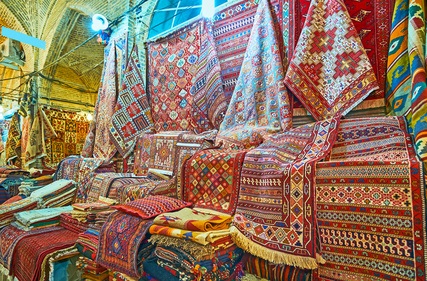 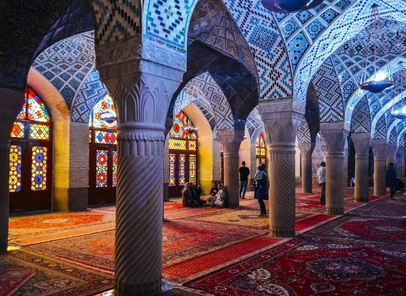 Nazir Al-Mulk Mosque in Shiraz,Iran-Also known as the Pink Mosque 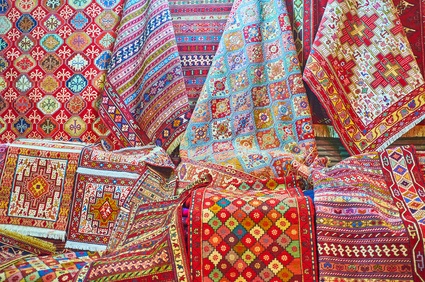 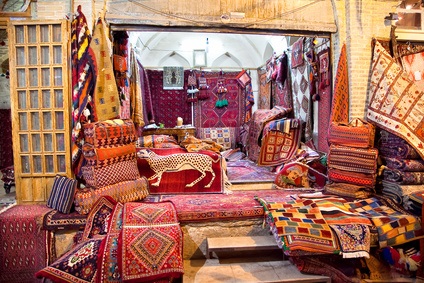