The advent of Persian Gabbeh rugs (gah-BAY) from Iran into the Western market is relatively new, even though the earliest of these rugs were being woven in Persia as early as the 1500s. Fifty years ago, most rug enthusiasts had not even heard of them.

Gabbeh rugs are distinctive and relatively easy to recognize. For this article, we are more concerned with Persian Gabbeh rugs but today, the term Gabbeh is used broadly to describe modern-looking rugs, usually relatively thick, with a tribal nature from many different weaving countries.

Please note: There can be several different spellings of many of the rug names and places. 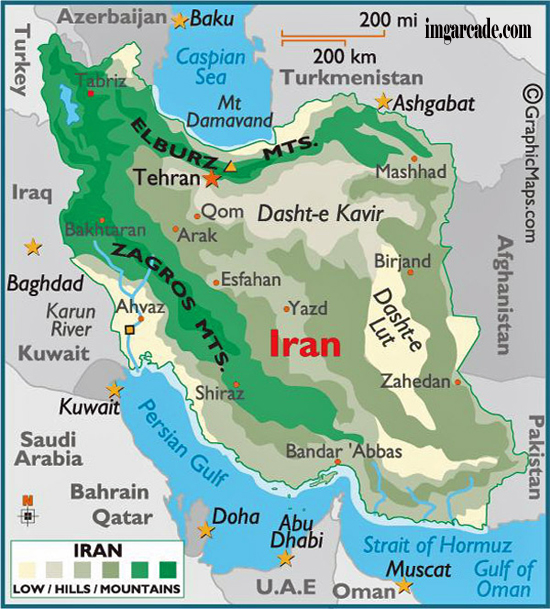 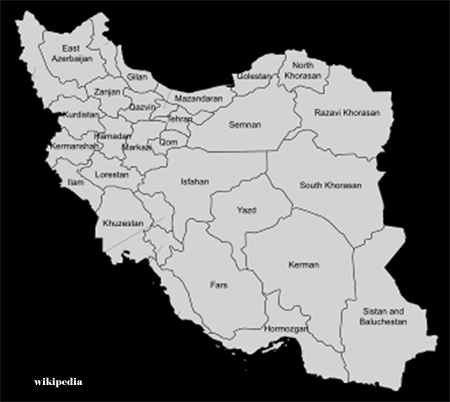 Gabbeh rugs have been woven for centuries by nomadic tribal weavers living in the Zagros Mountains region running along the Western border of Iran.

Southernmost tribes most associated with these rugs are the Qashqai and the Luri in the Fars province. They are also produced in the Northeastern province of Khorasson (Khorasan) around Meshed where the rugs are woven from undyed wool.

Other areas in Iran produce these rugs as well, such as the Kurds and Bakhtiari.

The basic design of Persian Gabbeh rugs, whether antique or modern, is quite different from the classic Persian designs. These rugs have large open fields with just a few color combinations. Small motifs can be found placed throughout the field which can include birds, plants, animals, as well as human figures. The geometric design patterns are more modern-looking than their classic Persian counterparts.

Traditionally, Gabbeh rug weavers (usually the women) do not use a cartoon or pattern. The weaver will incorporate everyday life in her changing environment into the rug she is weaving. The overall design is usually simple and plain but it is always warm and creative. Each one is a piece of art which is the genuine creative expression of the individual weaver.

The modern Persian Gabbeh rugs have grown and evolved from the earlier ones and today they can often look like sophisticated abstract art. It is because of the unique quality of their designs that these rugs fit well into today’s modern interiors (though perhaps not as well in formal rooms).

The spontaneity and boldness of the design of these rugs have made them very popular.

The natural dyes used by Gabbeh weavers give the colors a bold and vivid look.

Because these dyes are collected from natural sources such as madder root, walnuts, and other plants and insects of the region where they are woven, the natural irregularities in the dyes results in many color variations rather than uniform solid colors, giving these rugs their rich texture.

Some Persian Gabbeh rugs can be found with nothing more than variations of color in a field.

Although the common elements in the design of the Gabbeh help to identify the rug, the method of construction is very important as well.

The nomadic weaver’s life dictates that the loom must be able to be dismantled and set up easily in each new location and the incorporation of materials from each site (along with those taken with them) is also a necessity.

Traditional Persian Gabbeh rugs are woven on a horizontal ground loom. The difference in the materials found at each site often resulted in rugs that were slightly irregular in shape. It also meant the rugs had to be smaller in size for easy handling during moves.

The early rugs were rough and primitive and quickly woven for personal use in the tent. They were very coarse (the word Gabbeh comes from the Persian ‘raw,’ ‘rough,’ ‘coarse,’ etc.).

The antique Persian Gabbeh rugs were not only coarse with a knot count of 40 knots per square inch or less, but their wide rows of multiple wefts (side to side foundation cords) gave them a pliable feel. This made them very suitable not only as floor coverings but bedding as well.

Traditionally the women of the tribe are the weavers who also hand card and spin the wool from their own sheep. Wool is used for both the foundation and the pile.

The wool from the sheep used for the foundation and pile of the Gabbeh rugs from Iran is of excellent quality. The sheep are grazed in high altitudes which produces more lanolin to give the wool its sheen, softness, and stain resistance.

The knot is usually the Senna or Persian asymmetrical knot but the Turkish or symmetrical knot can also be found. Many varieties of Gabbeh will have ‘barber pole’ selvages, a type of stitch where the edges are wrapped in two different colors. Fringed ends are usually quite short.

Although the antique Persian Gabbeh rugs were indeed ‘crude and coarse,’ these rugs produced commercially today are not crude by any means and perhaps the word ‘thick’ should replace ‘coarse.’

Modern Persian Gabbeh rugs (produced in the 20th century to the present time) have gone through several updates resulting from the introduction of these rugs into the commercial Western market. It became necessary to transform a rug from a quickly woven article for use in a tent to a commercially viable product.

From the early to mid-20th century, synthetic dyes were being widely used in the rug producing world. The Persian Gabbeh rugs began to turn away from bright primary colors to the use of raw, undyed natural wool to get away from those garish synthetic dyes. They also moved from bold graphic designs to plainer and simpler designs. 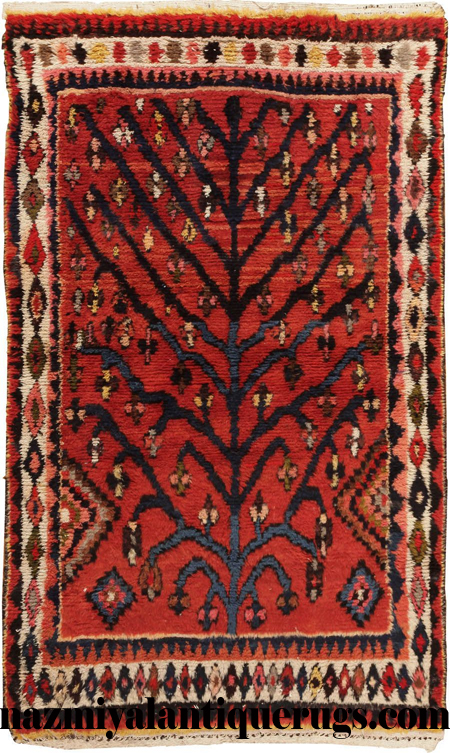 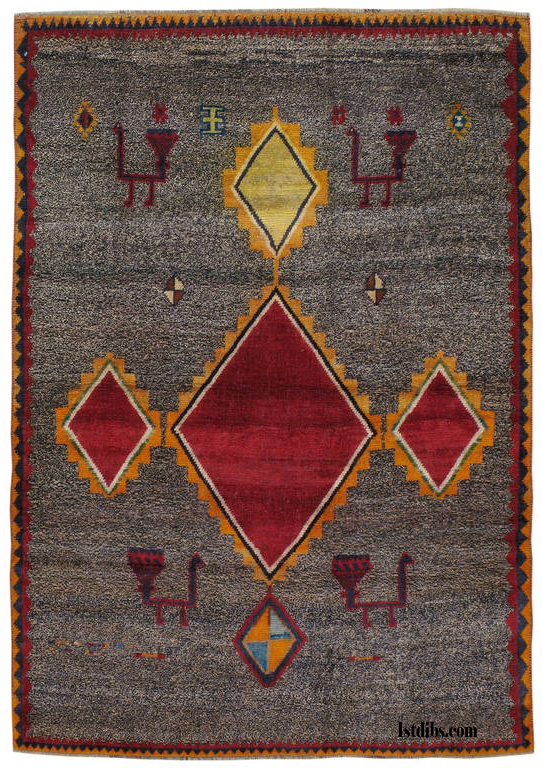 In the 1980s, rug dealers in other countries began returning to the traditional natural dyes to bring new life into their woven rugs. By that time, the art of natural dyeing had all but disappeared from Iran. Fortunately, there was a natural dye master living in Iran who had perfected this almost lost art. Although it took years for his work to be accepted, his dye house was ready when the Iranian rug producers saw the success of the natural dye movement in the other countries such as Turkey, and turned to him. This man was Abbas Sayahi.

In the late 20th century, rug producers began to recognize the commercial possibilities of these unusual Persian rugs. The most successful of these was Gholam Reza Zollanvari. This man was largely responsible for updating the woven construction of the Persian Gabbeh rug from a floppy blanket to a thick and substantial floor covering. By doing away with multiple wefts, a more compacted carpet was created. The rugs were still very thick but now had tightly compacted wefts and an even finish without sacrificing the authenticity and charm of a tribal rug.

The newer Persian Gabbeh rugs went through other changes as well. They usually used only one primary color such as a red, dark blue, green, or yellow. The weave now had 40 to 60 knots per square inch. The simple designs usually had a one color field with some animals or some other type of folklore scene or could be just a simple banded design in various colors. These new rugs made a tremendous impact in the commercial market and were a hit from the start.

In 2000, the U.S. embargo of Iranian rugs ended. The Persian Gabbeh rugs had been very successful in Europe and soon began to be shipped to the U.S. on a regular basis. Several companies were formed to produce Gabbeh rugs in sizes suitable for American homes such as 4x6, 5x7, 8x10, and even 10x14. Some of these producers include the Zollanvari family, James Opie, author of 2 respected Oriental rug books on tribal rugs, and Atiyeh International.

Unfortunately, in 2010, with just a few months’ notice, another embargo on Iranian rugs was imposed due to heightening tension between the U.S. and Iran. This embargo, as well as the lack of skilled weavers and the rising cost of raw materials negatively impacted the handmade rug industry in Iran leading to a great concern that the art of weaving may be rapidly declining.

In January of 2016, President Obama finally lifted the current embargo on rugs from Iran, allowing them to once again enter American soil.

When looking for a Persian Gabbeh rug to purchase, you may notice names that help to categorize different types of these rugs. Below are some of these: 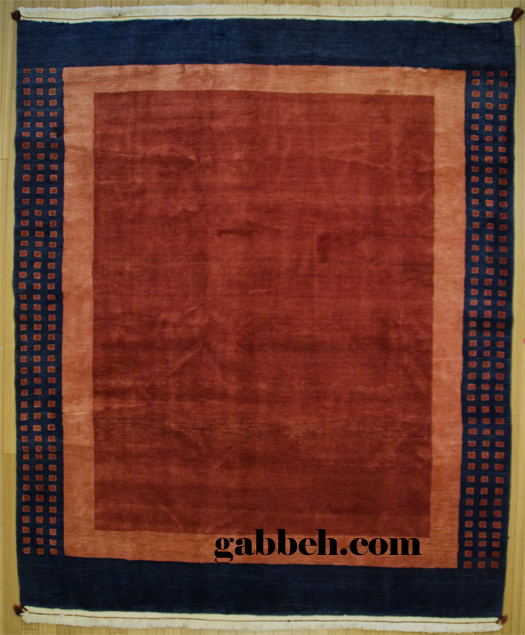 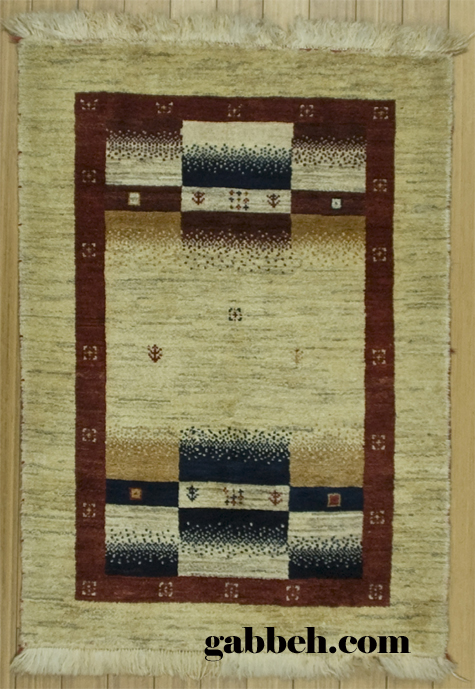 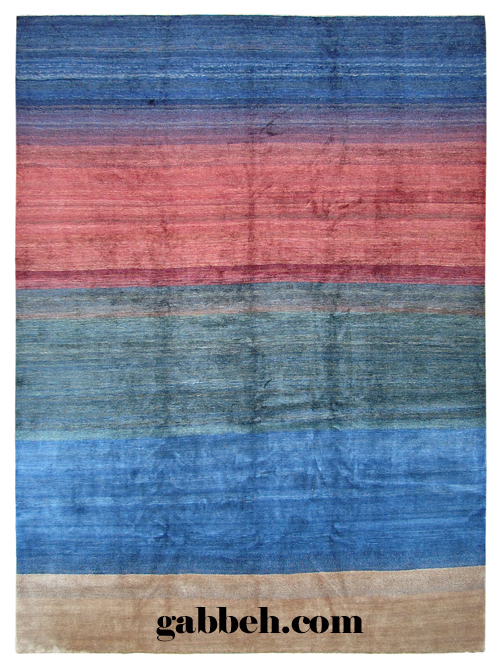 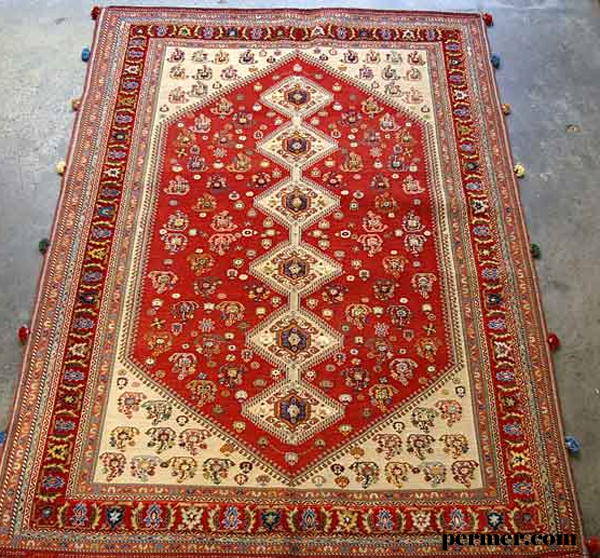 Before the last embargo was lifted in 2016, the popularity of Gabbeh style rugs had resulted in a production of large numbers of these rugs in many other countries such as Turkey, India, China, Egypt, Afghanistan, Pakistan, and Nepal. The majority of these Gabbeh-style rugs use wool on a cotton foundation rather than the wool on wool of authentic Persian Gabbeh rugs. Rugs with a cotton foundation can usually be identified by their bright white fringes.

Many of those produced in Afghanistan are made with undyed wool with the colors derived from the natural wool colors in hues of ivory, grey, brown, and black. Wool is woven on a cotton foundation. 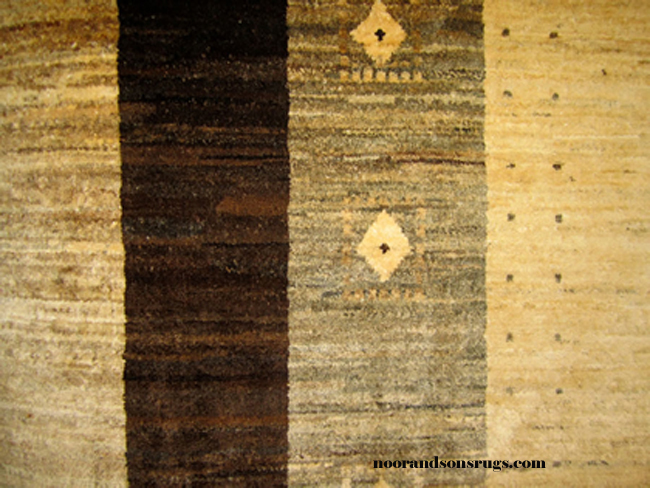 
Gabbeh style rugs from Nepal are made with hand dyed Himalayan wool on a cotton foundation. The pile is very lush and the colors can be very deep and can include Crimson Reds, Cobalt Blues, Rust, and Olive Greens, often on fields of hills and flowers or with figures such as the lion below. 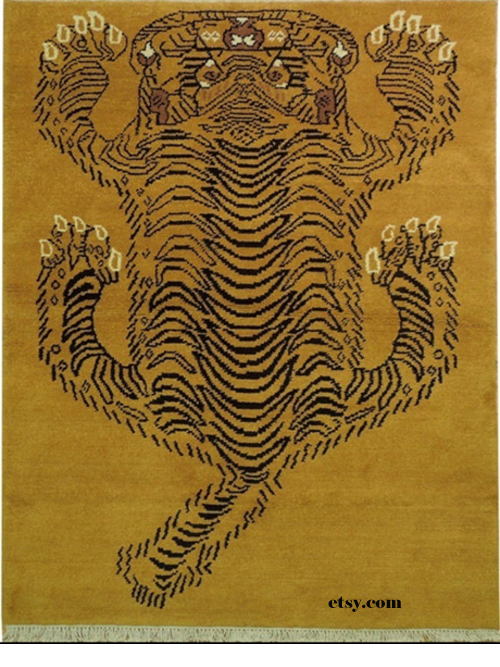 Gabbeh rugs woven in Pakistan are similar to the designs of Iranian Gabbehs. They are woven with wool on a cotton foundation. 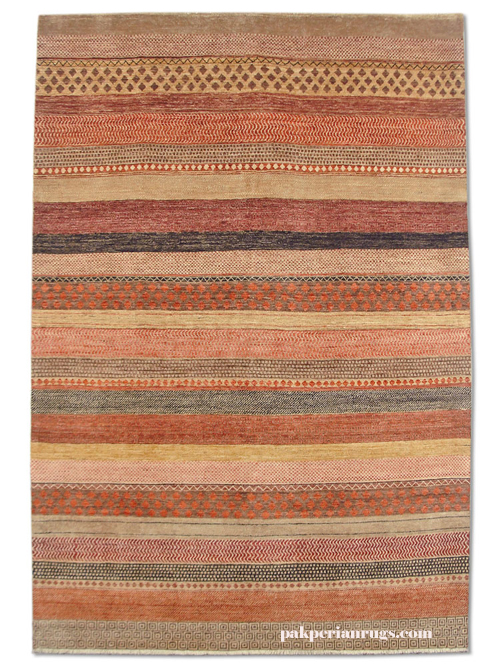 Gabbeh rugs from India (called Indo-Gabbehs) are usually much stiffer and don’t have the color variation which comes from hand-spun wool and natural dyes, such as those used in the Persian Gabbeh rugs. The wool is also not the same quality or softness as the Persian wool. The Indo-Gabbeh rug is not as durable either and is constructed of wool woven on a cotton foundation. 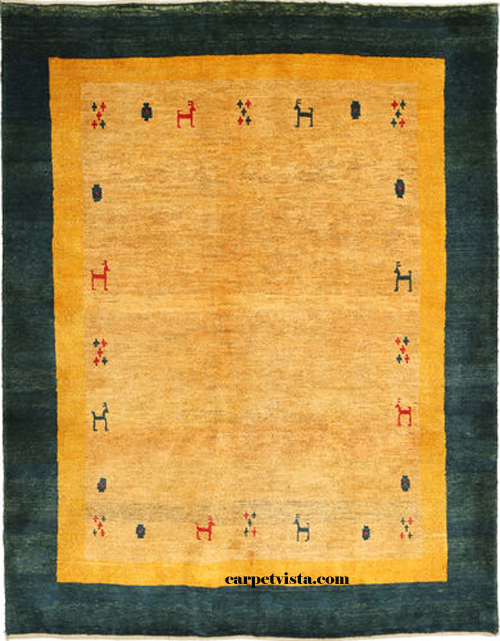 Persian Gabbeh rugs from Iran today are still wonderful examples of the beauty of simplicity and the unique creativity of the weavers. They are much in demand in the U.S. as in the rest of the Western world.

We welcome your call to our office at 607-272-1566 with any questions you may have about Gabbeh rugs, our rug cleaning, rug repair, stain and odor removal, and any other services we offer. 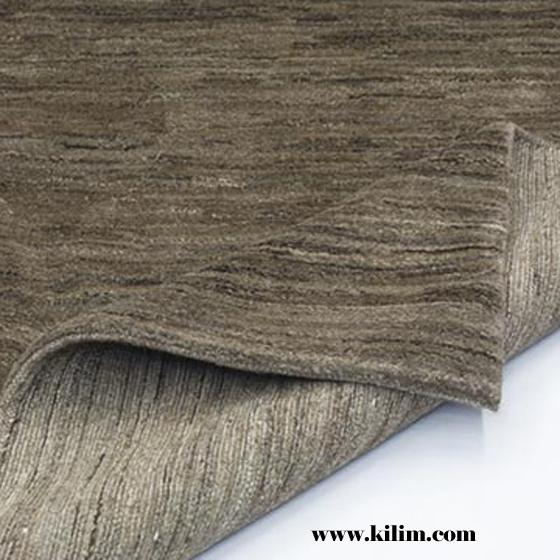 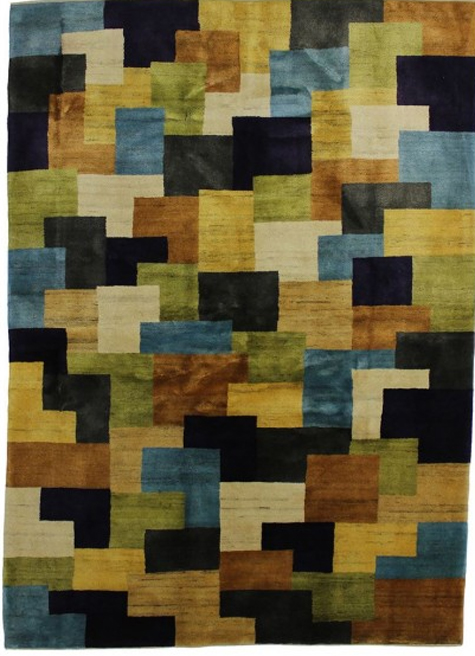 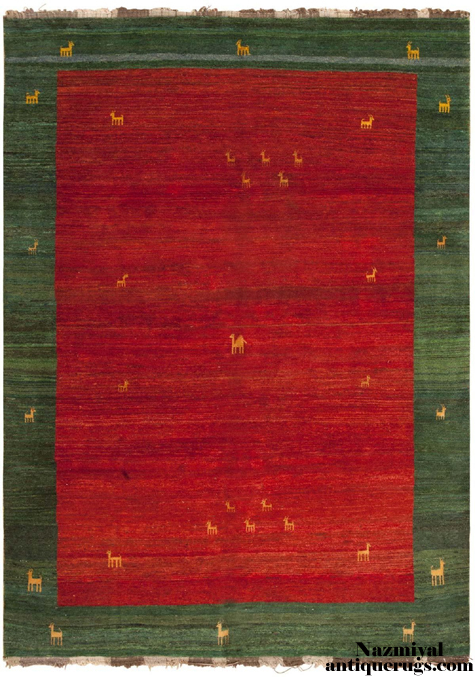 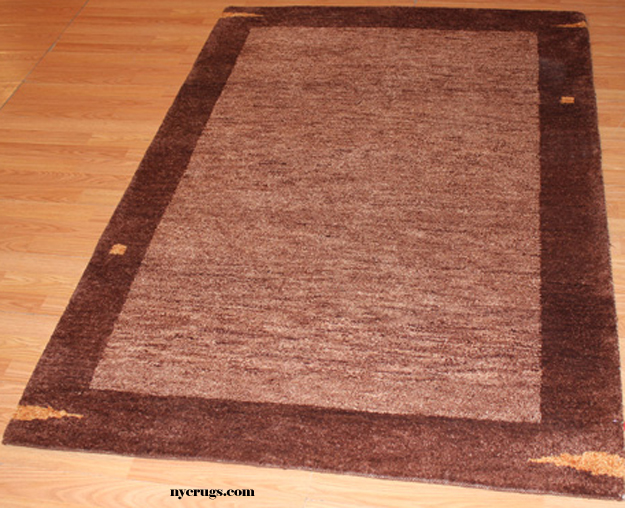 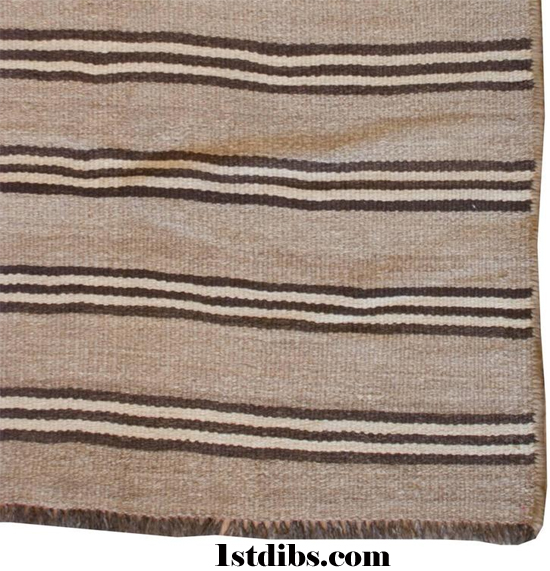 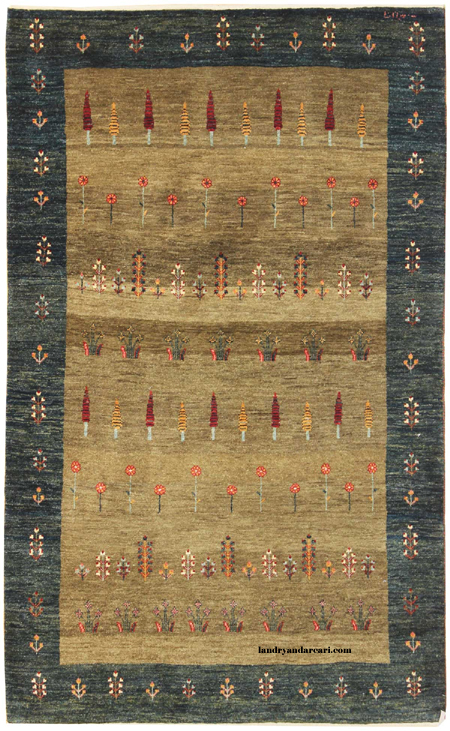 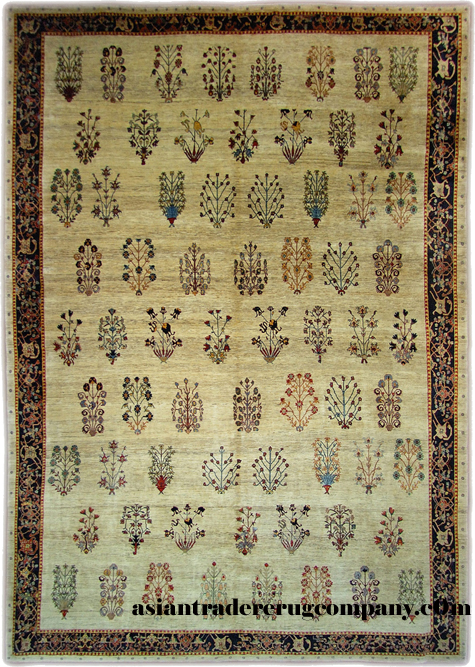 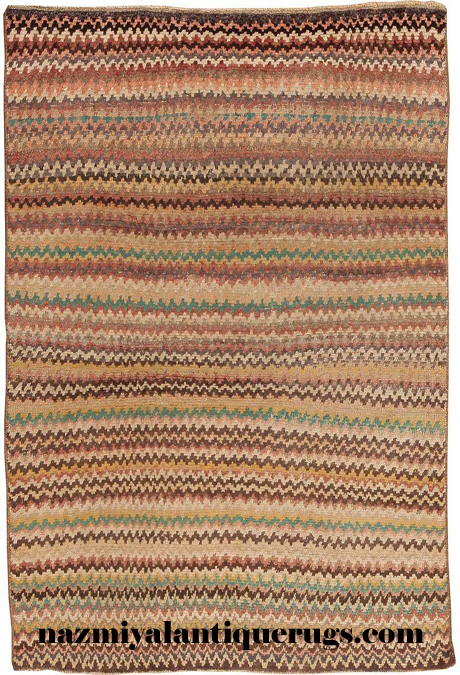 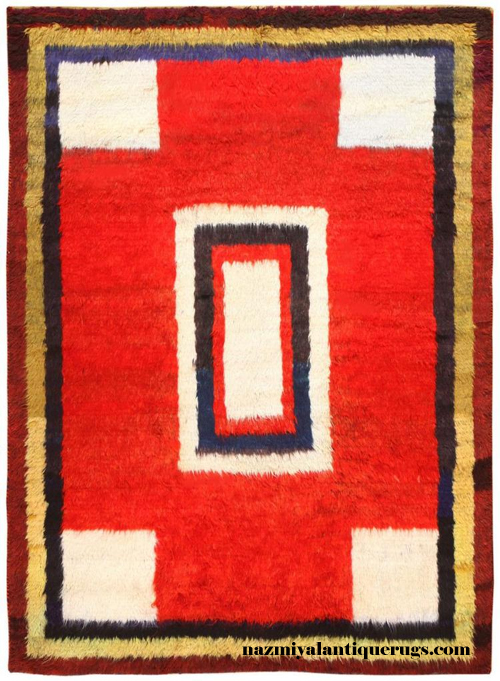