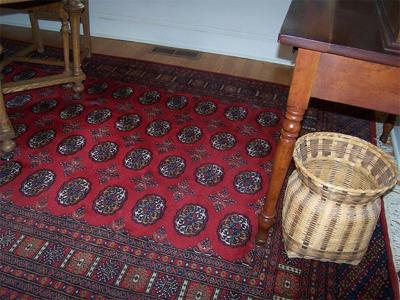 The following is an except from an article, Oriental Rugs – Art You Can Walk On, posted by Elaine Rogers on Saturday, May 3, 2014, in the Dallas-Fort Worth Star-Telegram.  Ms. Rogers tells about her personal experiences with these rugs and Iran and with one rug in particular...

Persian carpets and other 'rugs of the East' are firmly established as elegant design elements — subtle and often-unheralded — that loudly whisper refinement and good taste. Historically, many of us think of them in terms of the imagery of medieval Europe: They were considered great status symbols in the 1500s and, some 200 years beyond, were too precious to put on floors; instead, they adorned tables, chests and walls.

But the story of Oriental rugs goes back so much further — try 3000 B.C., when Nomadic tribes in Mongolia and Turkey used hair from their camels and sheep to weave carpets to keep their earthen floors warm, and 1000 B.C., when rugs with an impressive 300 knots per square inch were already in existence.

In Persia, especially, the artistry of the carpet developed so much that, today, a dizzying variety of distinctive patterns and styles is linked to at least 40 rug-making Iranian cities or villages. Oriental rugs have been prominently depicted in literature, art and music for thousands of years.

Oriental Rugs - A Connection to the Past

While many folks become enamored with oriental rugs based on a color scheme or because they saw something similar in a friend’s home, my own curiosity about Oriental rugs is of a sentimental variety: I have an oddly conflicted relationship with a Persian carpet I was given as a child.

There’s the pride of ownership, of course, but also discomfort — the latter, because my mind boggles at the oft-reported idea of village women and children toiling away at looms, tying tiny knots all day to weave these intricate patterns of Persian florals onto artistic tapestries that others might tread upon with nary a thought. (Child labor continues to be an issue the carpet weaving industry grapples with, especially in India, Pakistan and Afghanistan.

A true Oriental rug is 'hand-knotted,' woven one knot at a time — a tribute to the patience and craftsmanship of the weavers. The terms 'hand-tufted' and 'handmade' are misleading — those can still be machine made. It is said that the average weaver ties as many as 10,000 knots per day, and a 9-by-12-foot Persian rug that has 500 knots per square inch takes four or five artisans, working six hours a day and six days a week, about 14 months to complete.

My medium-sized, cream-colored creation is a Kashan, I’m told, and like me, it is, at least, a semi-antique. It was jokingly dubbed my “dowry rug” when my dad purchased it several decades ago during a two-year period that our family lived in Iran.

I was 13, an age when many Iranian girls from wealthy families — in a not-so-distant past — were routinely married off to old men of their fathers’ choosing. Although I treasured this exotic souvenir of time spent abroad, I also tucked it away for decades — seldom using it, walking upon it or inviting others to do so.

It’s a decision that folks with strong footholds in the rug-making world call 'a crying shame.'

When my family first arrived in Tehran, of the many new sights and sounds encountered, perhaps none was more startling than the daily drama of merchants flinging their carpets on the filthy roads in front of their shops so that the speeding taxis and motorists would drive over them, accelerating their wear-and-tear quotients with muddy tire tracks.

From a Western perspective, it was sheer insanity, but we were soon told that an appreciation of floor coverings with a soft, cushy pile was an American eccentricity, and old, thread-bare Persian carpets were most prized in this culture — thus, the vendors wanted their fresh rugs to look like antiques and fetch a better price.

Many a Westerner swerved and stopped to avoid soiling the roadway rugs, and the merchants would come out to the curbs and gesture wildly, beckoning the foreign motorists to put tire tread on their carpets to help improve their beauty.

Perhaps in Iran and other corners of rug-making countries such as China, Nepal, India, Pakistan and Afghanistan, some merchants might still use urban roadways to age rugs prematurely, but newer antiquing processes like acid-washing and leather-whipping are decidedly more common — and effective. Meanwhile, industry insiders say it’s almost impossible for a layperson to tell the difference between an antique rug and a newer one that’s been antiqued.

At first glance, my Persian carpet is a twin to one that resides in California with my sister. Our dad purchased them together, and they bear the trademark elongated center medallion surrounded by vines and Persian florals that make them instantly recognizable to those in the know as products of the city of Kashan. Of course, the symbolism and history of the intricate pattern were lost on us, the artistry of the weavers a hard thing to fathom.

Our dad hung the carpets on the wall of a bedroom through our teen years, and my sister and I discovered many miniscule differences between them. We would trace the delicate patterns of vines and blossoms with our fingers, lovingly pinpointing the places where one weaver made a flower using mint thread while her counterpart selected yellow or green.

Whether mistakes or artistic deviations, these types of 'flaws' are a hallmark of Oriental rugs: Two women from a nomadic tribe might start weaving a rug from opposite sides, adding their own touches as they work, while weavers of Persian prayer rugs are known to purposefully weave irregularities into their creations — a little speck of bright orange in a rug full of browns, for instance — as a reminder that humans cannot duplicate the perfection of Allah.

As for my old visions of children toiling away to make my rug — and other rugs like it, it is important for retailers to research their suppliers and, similarly, for consumers to find rug dealers whom they trust, to ask questions about their carpet sources and not to be comfortable with retailers who give evasive, vague or inadequate answers.

So, it’s time for my dowry rug to come back out into the light.

I’ve resolved that if I can’t bring myself to walk on it daily, to flatten its soft pile with everyday usage or to expose it to the insensitivities of my household’s curious cats, I can at least mount it on a tall wall in my entryway and gaze upon it as I journey out into the world and back again. If my rug is once again in full view, I’m sure I’ll stop from time to time to admire the intricacies.

Plus, I’m overdue for sharing some of what I know of its history with my kids, who just might enjoy tracing the vines and searching out a few of those intriguing flaws.

ABC is HERE TO HELP

If you ever have any questions about any oriental or area rug or would like advice on purchasing or cleaning, ABC is easy to reach.

Our full-service rug cleaning plant is located in downtown Ithaca, NY.  We offer free pickup and delivery services to the Syracuse, NY and many other surrounding areas.

You can call our office to schedule an appointment at 272-1566 or you can contact us by clicking here.