THE PHASES of
NAVAJO CHIEFS BLANKETS

The Navajo Chiefs Blanket was a shoulder blanket that was woven wider than long and the only Navajo weaving to be done this way.

The Chiefs Blankets, for identification, are often divided into several distinct types, some of which are labeled as 'phases.'

Below are listed the approximate years and descriptions of the phases of the Navajo blankets, as well as a few other important types of Navajo Chiefs Blankets: 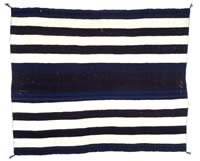 Up until around the 1820s, the Navajo and Pueblo blankets consisted of simple stripes.

Then the Navajos started producing a design of blanket known as ‘First Phase Chiefs Blankets.’ These were highly prized for their beauty and because they could be used as coats during the day and blankets at night.

The First Phase Chiefs Blankets were a square shape with a plain design consisting of horizontal stripes of black and brown or indigo blue and ivory made of white & brown natural churro wool. Wider stripes can be found on the top and the bottom and wider stripes in the center.

When the 4 corners of a Chiefs Blanket are folded to meet at the center, the design is the same as when it is unfolded.

This phase of blankets were made up to approximately 1865 and were worn by the Navajo and traded with both Pueblo and Plains people, such as the Sioux, Cheyenne, and Ute.

Around 1840 the ‘Second Phase Chiefs Blanket’ arrived on the scene. These were made until about 1870.

In this phase, rectangular red rectangles (12 grouped in twos) started to appear within the horizontal bands. The design was basically twelve boxes or rectangles laid down on a First Phase Chiefs Blanket pattern so the First Phase Blanket became the background. 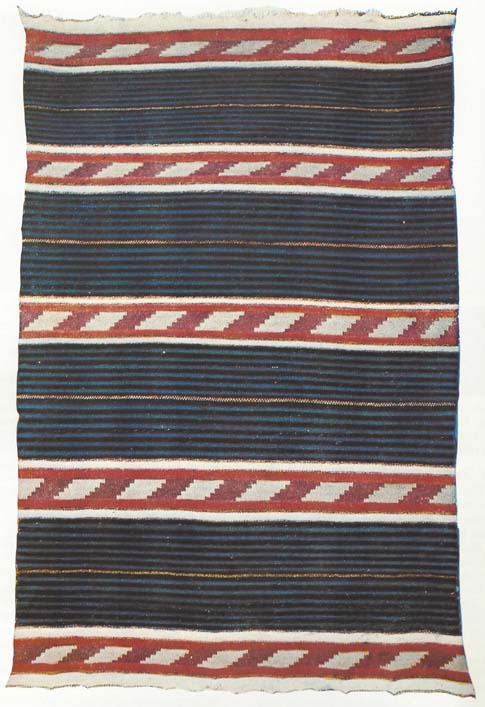 In this time period, the prominent red color the Navajo weavers prized came from the bayeta, a red woolen flannel cloth that was made in England, Spain and Mexico. The bayeta, which had been occasionally used in some First Phase Blankets as well, was usually dyed with cochineal from the cochineal beetle. The lac beetle, found in Asia, was also sometimes used.

No plant existed in the area where the Navajos lived which could produce the permanent intense red in rich shades of the bayeta cloth. They would unravel the cloth and then respin the yarn. The red bayeta replaced the brown color in the First Phase Chiefs Blankets. 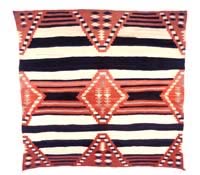 The Third Phase Chiefs Blankets of the Navajo weavers contained nine elements (3 each across the top middle) and the First Phase pattern. These elements could be diamonds, squares, or rectangles. As they were added, they grew larger and became more the centerpiece of the blankets, rather than just embellishments and almost obscured the original First Phase band pattern.

Other elements such as zigzags, crosses, thin lines, stacked elements, and triangles were added inside the main elements. The color 'rose' often replaced the earlier red color. Natural white and/or brown churro and indigo blue were used for the stripes. 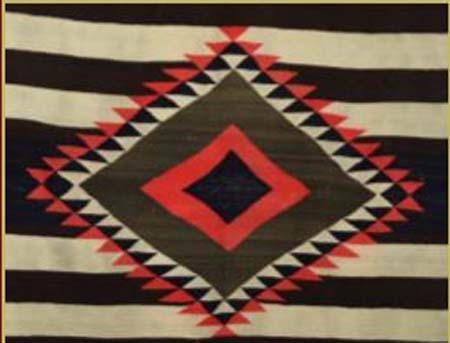 In this phase, the diamonds became the most important focal point, and some consisted of squares against a solid background.

Transitional Navajo Chiefs Blankets were produced from 1880 to 1900.  These Navajo weavings had a blanket feel, but the yarn composition was no longer raveled bayeta. They were generally homespun and aniline dyed.

There were also variant Chiefs Blankets that used the basic Chiefs Blanket layout, but had unique patterns and designs which did not fall into any specific phase.

Transitional Chiefs Blankets can occur in all of the phases and are still being made today by the Navajo. 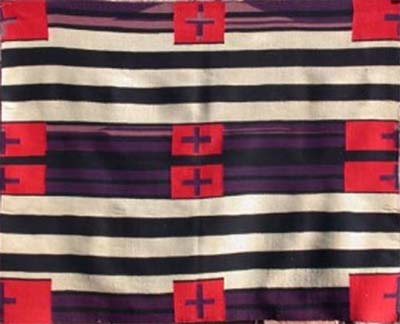 Germantown wool yarns, originally 3-ply, then 4-ply, and dyed with brilliant aniline colors from Germantown, Pennsylvania, were sold to the Navajo people in the 1890s through the trading posts.

The Navajos used this yarn to make the Germantown Chiefs Blanket, commissioned by many of the trading posts to replace older and rare blankets.

Needless to say, it would be unusual to find a true Navajo blanket of any of these phases today, though they do exist. In 2002, at a Tucson Antiques Roadshow, someone brought in a First Phase Chiefs Blanket said to be worth between $350,000 and $500,000!

For those of you who treasure Navajo weaving, it might someday be worth your while to have learned how to recognize these blankets! 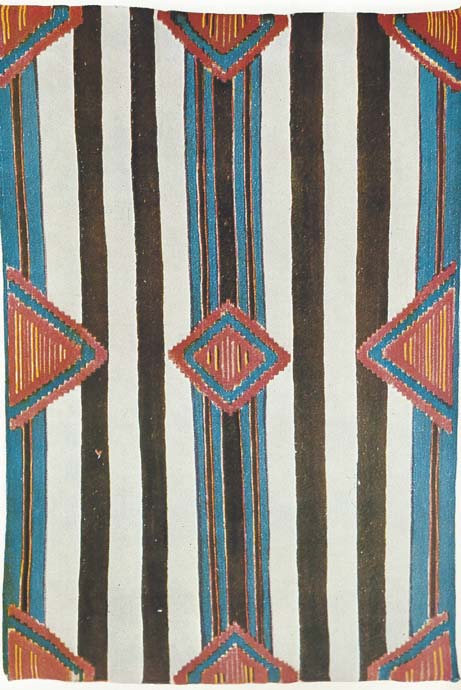