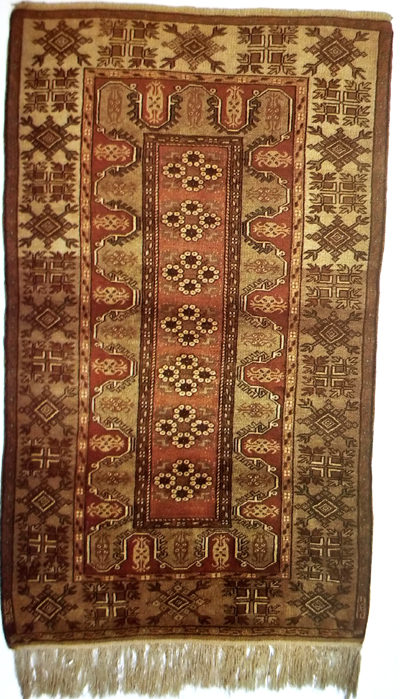 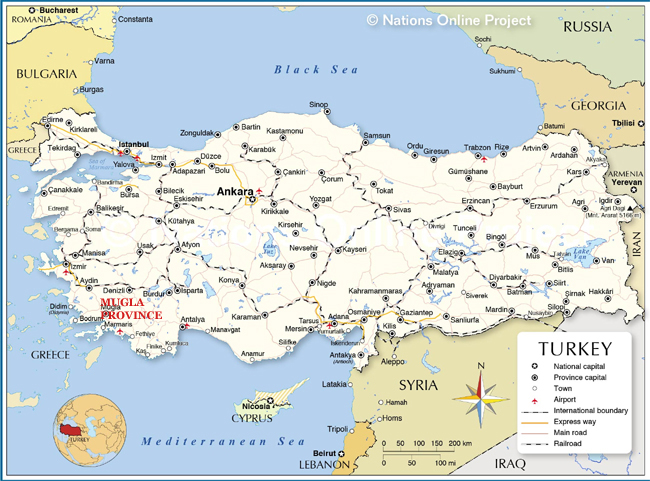 Milas oriental Rugs (Melas) are Turkish rugs woven in the district of Milas in Mugla Province in southwestern Turkey. Milas is an ancient city with a very rich history and a large number of noted ancient archaeological sites. One of these is the nearby Mausoleum of Hecatomnus, classified by UNESCO as a World Heritage Site. The city of Milas is the seat of the district and today it commands a region with an active economy.

The peoples of the region of Milas have been able to keep their Turkmen (semi-nomadic lifestyle) heritage alive, a heritage which includes the passing down of the art of rug weaving through generations of its women, as well as its distinctive clothing, traditions, and customs.

It is believed that a very distinctive type of the Milas oriental rugs emerged in the 16th century. These were 'seccade' or small prayer rugs. By the 18th and 19th centuries, other types of distinctive Milas rugs could be classified based on their colors and designs.

The 19th century saw the launching of the Orient Express train which brought more and more Europeans to Turkey for trade purposes as well as to visit famous cities such as Constantinople. The European influence on the art and architecture of the ruling Ottoman Empire was enormous.

Variants of Milas oriental rugs include the Ada Milas, Patlicanli, Cingilli Cafer, Gemisuyu, and Elkoynunda, etc, depending on style, colors, and other characteristics.

These Milas oriental rugs are closest to the original 16th century prayer rugs (seccade) mentioned above. The oldest examples of these classical rugs are the Ada Milas Rugs. The word 'ada' has several origins and may come from a word meaning island, referring to the island where the immigrants who first wove the rugs may have come from. The name could also come from the stylized carnation bouquet and tulip motifs that were often woven into the rugs.

The Ada Milas rugs usually contained a rather narrow, usually brick red rectangular prayer niche or 'mihrab.' This marked the spot on which the forehead touched the rug while kneeling for prayer. The side of the niche would usually have several different plant motifs. A specially designed field called the 'alem' was usually woven above the niche where the 'heavenly promises' could be found.

Additionally, the Ada Milas rugs tended to have wide borders and small fields and their colors were more muted than other types of Milas rugs. Motifs such as cat’s paws, soles, notches, etc. could often be found in an abstract manner on the sides of the rug, usually in a repetitive order.

Today, the Ada Milas rugs are woven in the village of Karaova.

As mentioned above, the 19th century launching of the Orient Express brought the European influence to Turkey. The Baroque style of Milas oriental rugs was the result. Flower designs in a zigzag pattern replaced the ordered and abstract motifs of the classical Milas rugs.

This group of Milas rug began in the village of Karacahisar near the city of Milas. The rugs still being produced in this village and its surrounding area are based on the early Karachisar rugs.

These rugs do not have the niche or the alem as in the prayer rugs, but are characterized by a centrally situated and larger field called the 'gobek.'

Medallion-like motifs surround this field as well as abstract leaves and branch motifs which are woven along the sides. They are always woven on a bed of white and red. The Karacahisar rugs are not as tightly woven as the prayer rugs. Medallion design Milas rugs can also  contain a large central medallion placed within a small field. 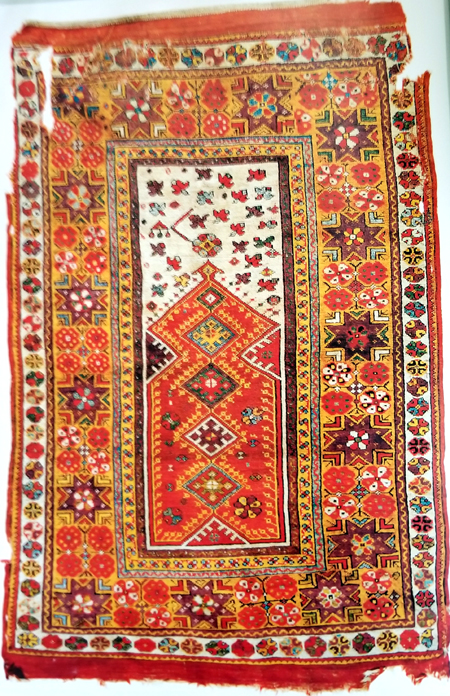 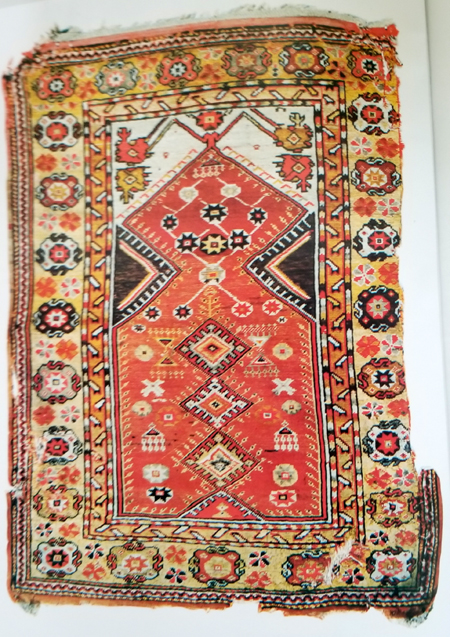 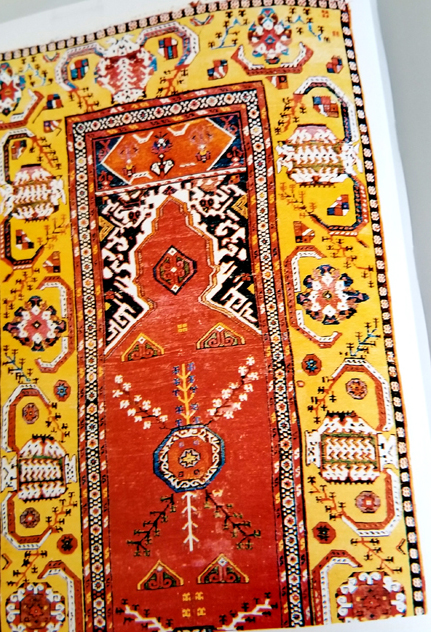 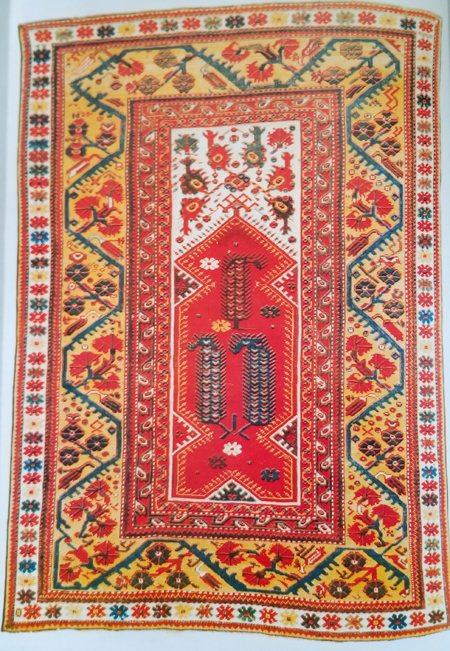 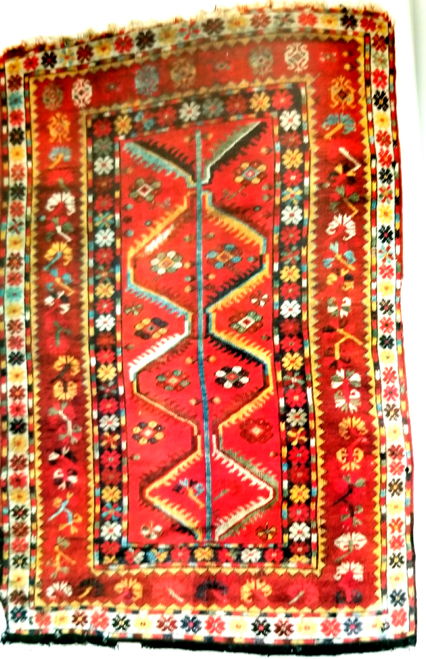 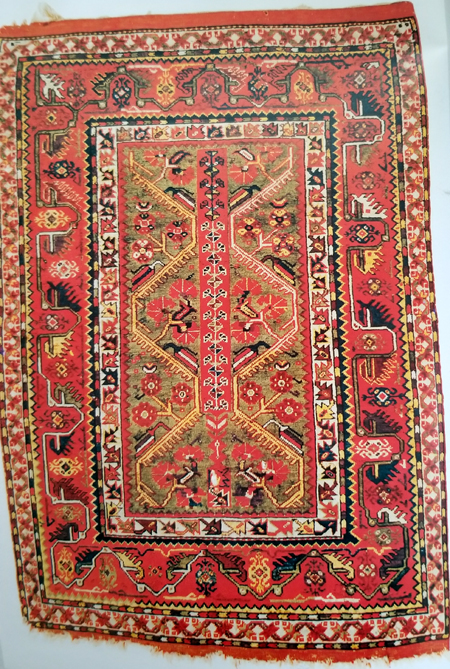 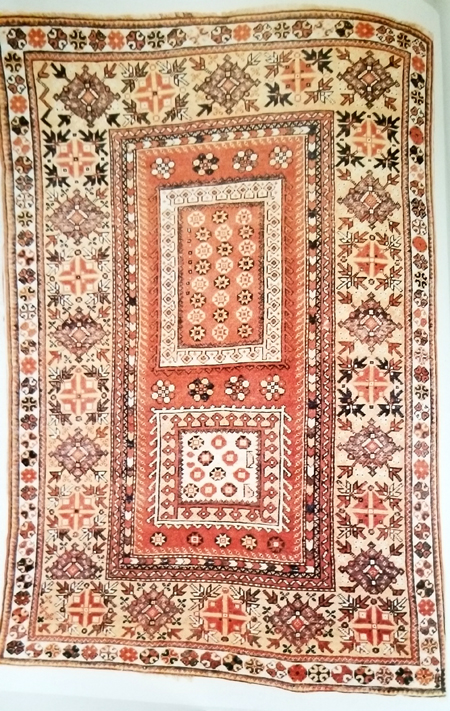 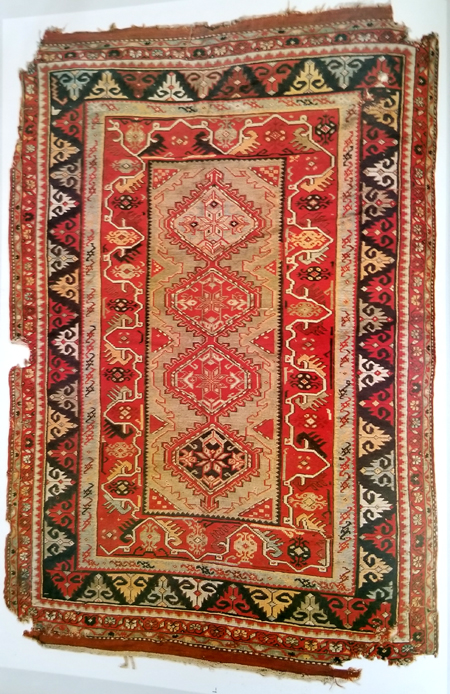 
The warp (up and down cords) is made up of 2 or three strands of wool, occasionally cotton as well. These strands can often be found colored in blue or pink and they can form a rather long, loose, and unattractive fringe.

The weft is usually 2 or more shoots of wool, dyed red in older rugs and golden yellow in newer rugs. Occasionally, cotton is used. These red and yellow wefts are how Milas rugs stand out from other Turkish rugs, especially when an extravagant amount of yellow is used.

The pile is wool and is generally medium to medium long in length.

The knot is the symmetrical Turkish or Ghiordes.

The ends have a kelim (flat area) with plain fringe at both ends.

The sides consist of 2 to 4 cords, wrapped with weft cords or overcast with wool.

Muted colors were generally used in the older rugs as well as natural dyes. Brown came from walnut leaves, reddish brown from the Erica vulgarus (similar to heather) shrub, extremely dark yellow from the leaves of the peach and apricot trees, brownish yellow from acorns, and green from mint were the usual colors found in these rugs.The wool itself could be blackened by leaving it in the ground for a week. Before 1870 a purple brown, almost a violet, could be found from the use of the dye from the Cochineal insect.

Colors used for current weaving in Milas rugs are light beige, light brown, yellow, and light green. Natural dyes are still widely in use. When aniline or synthetic dyes are used, the colors in the modern Milas oriental rugs may appear too brilliant and not harmonious. Although, they may seem garish at first, as the colors fade over time, they can become more attractive.

The Milas rugs are usually small, up to about 70 sf.

Rug weaving in Turkey today does not actually take place in the city of Milas, but in the many surrounding villages. Many different groups of villages regularly weave these Milas rugs. Most of them are located south of the city of Milas. Depending on the demand for these rugs, there can be as many as 7000 weavers working on their looms. The Milas designs are now being copied in Romania. 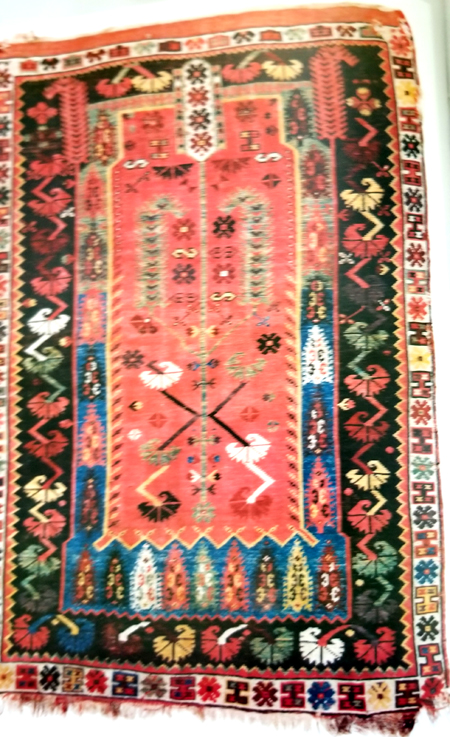 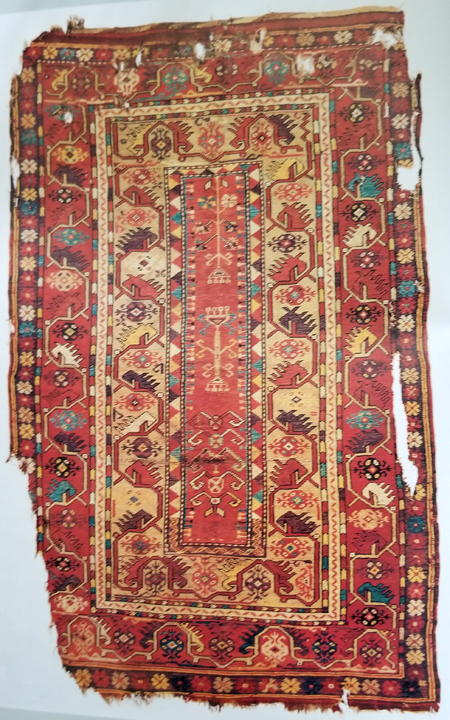 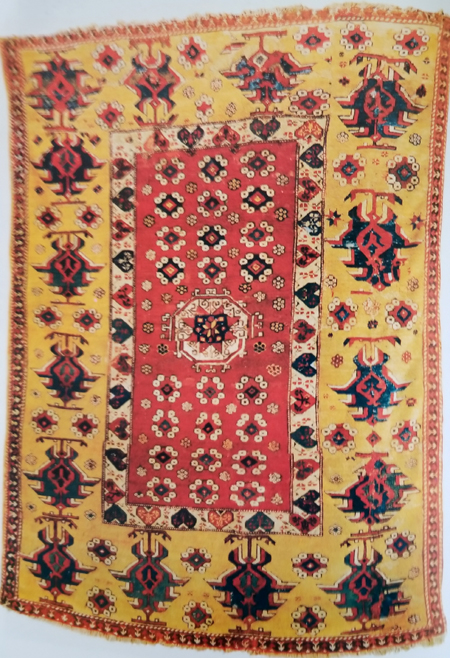 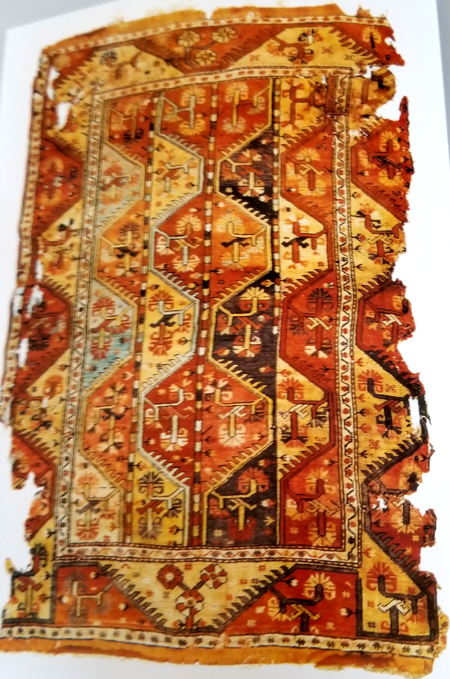 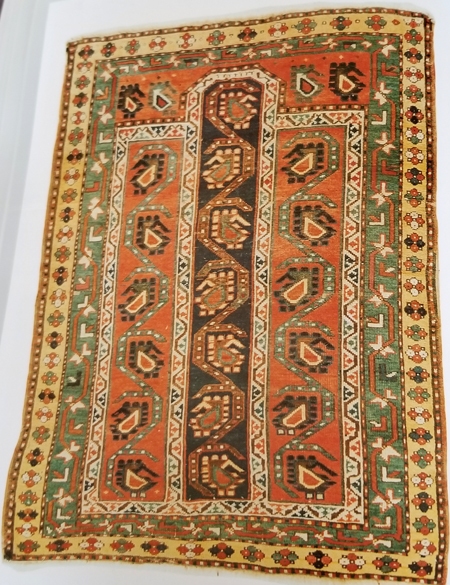 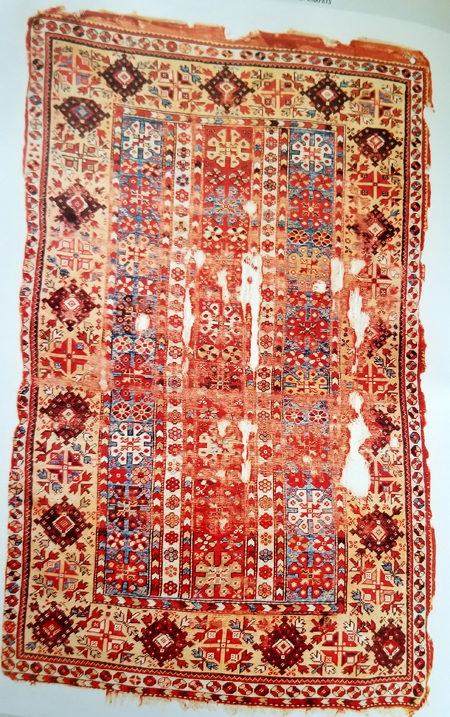 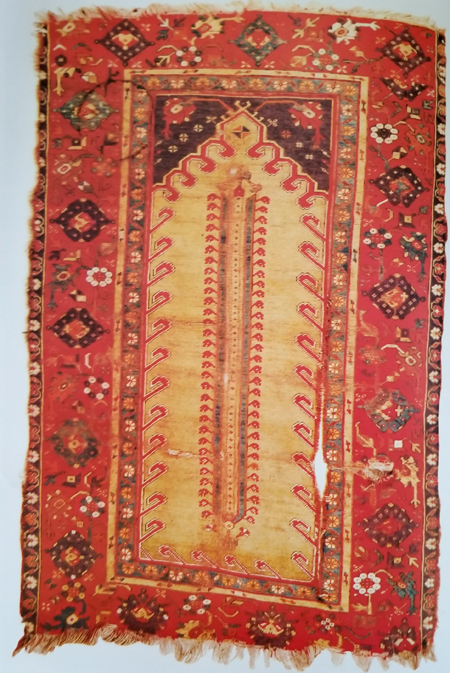 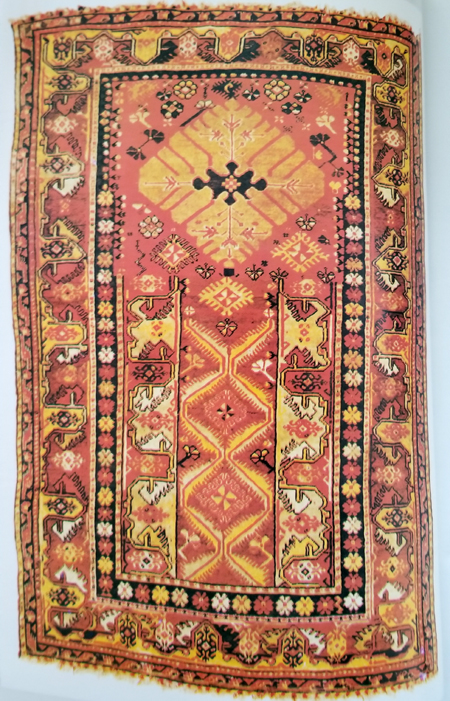 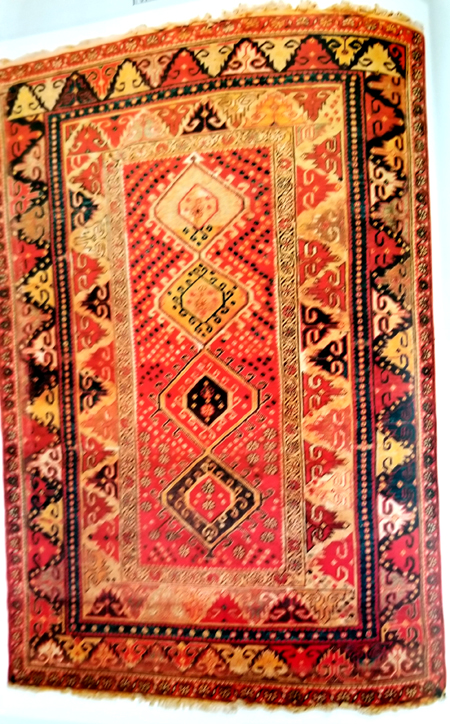 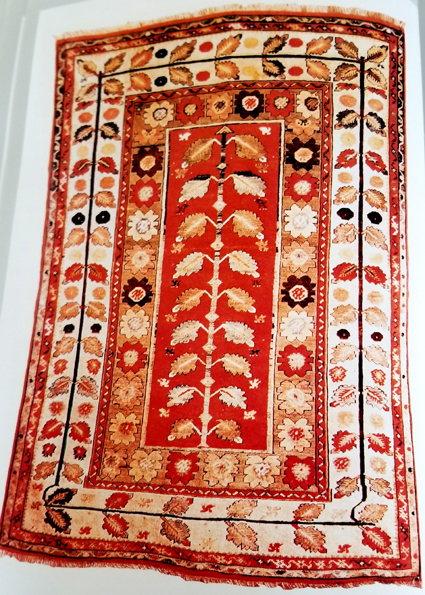