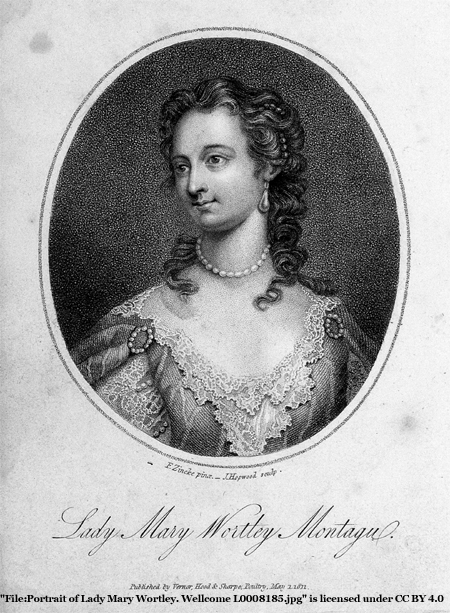 Lady Mary Wortley Montagu was born into a wealthy and entitled family in 1689 in England. (Her father was a Duke). She grew up to be a very spirited and independent young lady. She understood the value of education, even though this was not thought appropriate for girls of her time and social class.

She had the run of her family’s private library, taught herself Latin, and began an almost unheard of career as a female writer. She had written two volumes of poetry and a short novel by the time she was 16. Her writings allowed her to respond to the events around her and to also give public form to her private feelings.

You can research and enjoy her writings (letters, poetry, and essays)  which she continued to produce throughout her long life, but her most important contribution was her insistence on promoting a medical technique she discovered while in the Ottoman Empire (Turkey) that was instrumental in stopping the spread of the smallpox epidemic in England.

THE SMALLPOX EPIDEMIC
IN ENGLAND

England in the early 1700s was in the throes of a smallpox epidemic. There are some similarities between that epidemic and the coronavirus pandemic we are dealing with today, though smallpox was far more deadly than the coronavirus.

People were afraid to leave their homes and social life as they knew it had essentially stopped. Fatalities were at 30% and a good number of the dead were children. Even if a person did not die from the disease, they were often left terribly scarred from the blisters that covered their bodies. 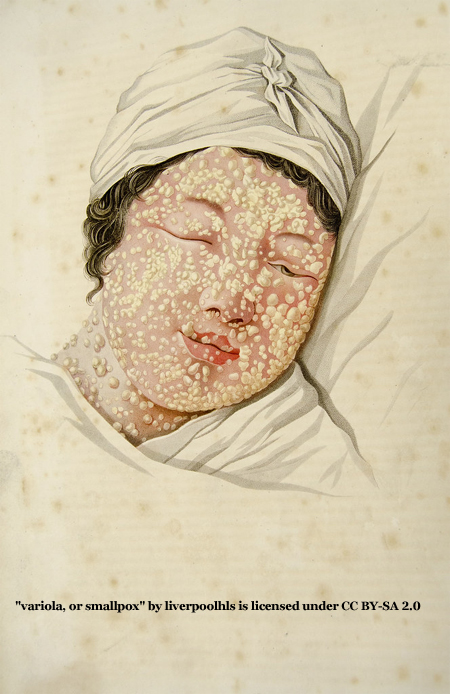 THE SECRET CURE FROM THE OTTOMAN EMPIRE

Lady Mary Wortley Montagu rejected her father’s choice of a husband and eloped instead with a rising politician. Her husband was eventually appointed the English ambassador to the Ottoman Empire. Breaking convention, she traveled with him and their young son to Constantinople (Istanbul today). She sent a series of letters back to England about the long journey. These letters were eventually gathered into a volume that became an early classic example of travel writing.

Once in Turkey, Lady Montagu wrote about the new world she encountered. She was completely captivated by the different customs of life, especially the art and music. But one fact that really caught her attention was that the people were thriving, their skin was clear, and they were relatively free from smallpox. She needed to find out how this could be possible.

Her search led her to an extensive network of female medical professionals. These women were not allowed into the Ottoman universities nor was their work written into Ottoman medical texts (written by men), so they shared their knowledge only among themselves. They became surgeons, faith healers, midwives, etc.

The women were using a procedure against smallpox that was a form of inoculation, known as engrafting or variolation. Historic written accounts that did survive proved that this was a well-known practice.

HOW DID INOCULATION WORK?

The technique of inoculation (engrafting, variolation) involved taking a bit of pus from a smallpox patient. That small sample would be placed just beneath the skin with a needle into the blood of a healthy person. That person would then get a mild form of smallpox but would become immune to the more serious form.

The procedure probably worked because the virus was introduced through the skin, a less deadly place than the normal route of the virus entering the nasal passages, where it would quickly multiply and overwhelm the immune system. This type of procedure may actually have originated in China and was also practiced in India and Africa.

The following is Lady Montagu’s letter to her friend, Sara Chiswell,  on April 1, 1717, describing the inoculation procedure:

“I am going to tell you a thing that I am sure will make you wish yourself here. The small-pox, so fatal, and so general amongst us, is here entirely harmless by the invention of ingrafting, which is the term they give it. There is a set of old women who make it their business to perform the operation every autumn, in the month of September, when the great heat is abated.

People send to one another to know if any of their family has a mind to have the small-pox; they make parties for this purpose, and when they are met (commonly fifteen or sixteen together), the old woman comes with a nut-shell full of the matter of the best sort of small-pox, and asks what veins you please to have opened. She immediately rips open that you offer to her with a large needle (which gives you no more pain than a common scratch), and puts into the vein as much venom as can lie upon the head of her needle, and after binds up the little wound with a hollow bit of shell; and in this manner opens four or five veins.”

Before coming to Constantinople, Mary Wortley Montagu had contracted smallpox. The disease had killed her brother a few years earlier. She survived but was left terribly scarred. When she learned the family was being called back to England from the Ottoman Empire, she was very concerned for her young son. Because she believed totally in this medical technique of inoculation, she had her son inoculated in Constantinople.

She understood the risk that a very small number of people could become very sick and even die and some patients could still give smallpox to others. But, nevertheless, this was far less dangerous than contracting the disease through the nasal passages. Mary's son never got smallpox.

After the Montagu family returned to England, a major smallpox outbreak occurred there in 1721. Lady Montagu was anxious to find the best way to spread the news about the possibility of ending the smallpox epidemic by the use of inoculation. She immediately arranged to have her second child (a daughter who had been born in Turkey) inoculated and invited as many of her society friends as possible to observe the procedure.

Because Lady Mary was a member of the aristocracy, her decision to do this got noticed and was written about in the papers. She embraced the attention she received because she was adamant about spreading the practice of inoculation throughout England.

Unfortunately, she encountered much bitter hostility to her plan, even including threats of physical violence.

WHY HADN'T EUROPE ADOPTED THE PROCEDURE OF INOCULATION?

It was true that European doctors knew about this procedure, but they had thus far refused to believe it worked for several reasons. How could a practice that came from a ‘backward’ Islamic country be the answer to smallpox, especially since it was a procedure done by women? Xenophobia was alive and well in Europe at the time!

Mary also suspected that British doctors were preoccupied with making money from treating their patients with smallpox and would not be too quick to destroy such a large part of their revenue.

Because Lady Mary felt it was useless to try to persuade the male medical establishment of the efficacy of and what she felt was the safety of the medical procedure of inoculation, she turned to the future queen of England, Caroline, the Princess of Wales, who was her friend and ally.

After consultation with the king, it was decided that they would conduct a series of tests of experimental inoculations on criminals who had been condemned to death. The criminals were offered pardons in exchange for their participation. The procedure was also tested on orphans.

These tests were, of course, highly unethical by our standards today but commonplace for medical professionals of those times. The Princess of Wales ended up having her daughters inoculated but not the future heirs to the throne, her sons.

SIMILARITIES OF THE SMALLPOX EPIDEMIC TO TODAY'S CORONAVIRUS PANDEMIC

Lady Mary had become a public figure and Princess Caroline’s decision to help her further the use of inoculation against smallpox quickly became a ‘political matter.’ Those who were opposed to the royal family would not consider doing anything they did. There were many, as well, who distrusted the Islamic origins of the technique, and others who did not want a foreign contaminant put into their body.

Those who mistrusted the medical technique advanced by Lady Mary offered reasons very similar to the politically-charged battles we are now facing with the current coronavirus concerning those as whether or not to wear masks or the racially-charged conspiracy theories concerning the origin of the virus or the distrust of the safety and efficacy of the new vaccines.

Nonetheless, Mary persisted in her efforts to promote the use of inoculation to help prevent the spread of smallpox in England and her discovery did eventually take hold there. She was quite unique in her open-mindedness and intelligence and her persistent efforts saved millions of lives.

Lady Mary Wortley Montagu lived into her early 70s. She remained an independent thinker and doer, eventually leaving her husband when she fell in love with a Venetian count. She continued traveling widely and writing about what she saw.

She used what minor fame she could muster with her writings to promote her ideas, such as the need for women’s education and more reasonable marriage arrangements. Lady Montagu was never afraid to address controversial topics and was one of the most important women writers of the 18th century.

EDWARD JENNER and the
SMALLPOX VACCINE 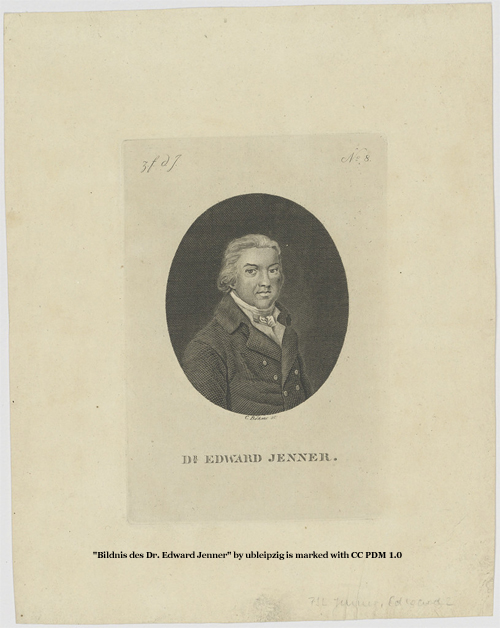 Several decades later, in 1796, Edward Jenner, himself a recipient of inoculation, developed the far-safer technique known as vaccination.

Jenner substituted cowpox for the more dangerous smallpox. (The word, vaccine, comes from vacca, the Latin word for cow.) Vaccines proved to be safer and more effective than inoculation, leading eventually to the elimination or control of many infectious diseases in the world today, smallpox among them.

Although Lady Mary Wortley Montagu had opened the door to acceptance of inoculation, which was the first time in Western medicine that antibodies were created to secure immunity from disease, it was Edward Jenner who ended up receiving all the fame while Lady Montagu’s contributions to the end of smallpox fell into relative obscurity.

There is a monument in Wentworth Castle Gardens in South Yorkshire, England, that is dedicated to the honor of Lady Montagu’s efforts to promote inoculation against smallpox. It is thought to be the oldest monument in the country dedicated to a non-royal woman. 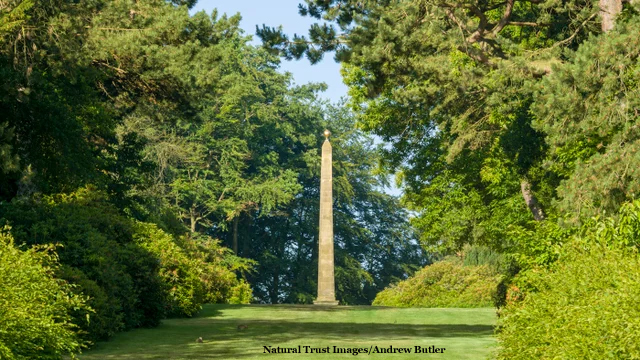 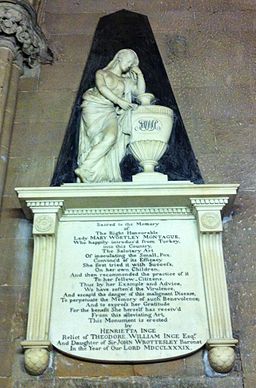 A NOTE ABOUT SMALLPOX TODAY

Since the last natural outbreak of smallpox in the United States occurred in 1949 and the last naturally spread case in the entire world happened in 1977, the World Health Assembly declared that smallpox was completely eradicated in 1980.

However, there is always some concern that the virus that causes smallpox could be used in a bioterrorist attack. The smallpox vaccine had stopped being given routinely to the public in the US by 1972 but it does not provide lifelong immunity. If a bioterrorist attack should occur, people born after 1972 would need to be vaccinated and even those who have been vaccinated against smallpox may still need to be revaccinated.

There are only two labs in the world at this time approved to have the smallpox virus for research. These are the Centers for Disease Control and Prevention (CDC) in the US and the Russian State Centre for Research on Virology and Biotechnology in the Russian Federation.

In the US, there are also Smallpox Response Teams formed after the 9/11 terrorist attacks as part of a larger plan to prepare for any bioterrorist attack. We stand ready to fight any attack but hopefully we will never need to use these resources. 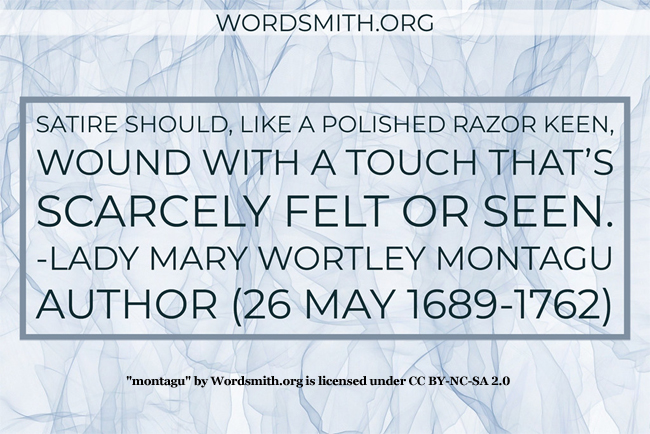 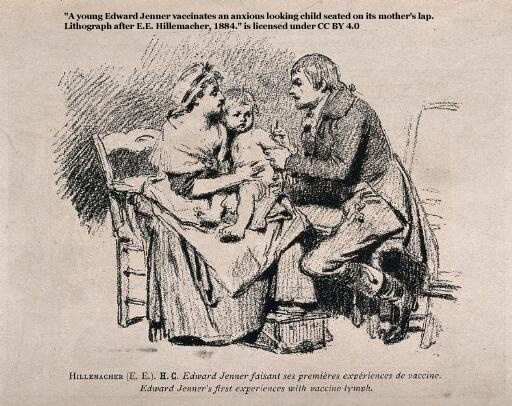 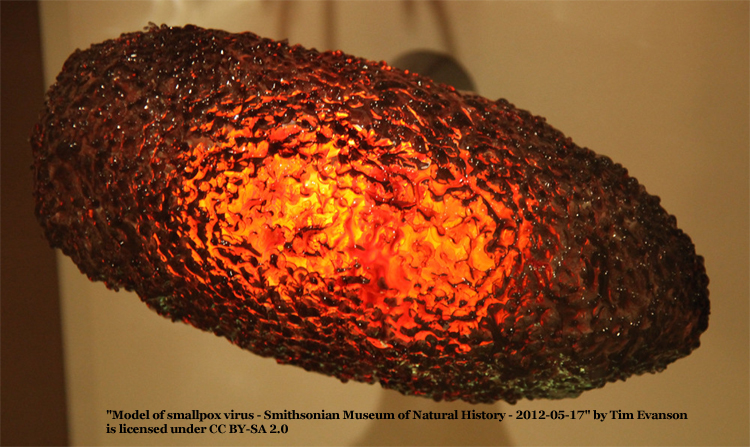 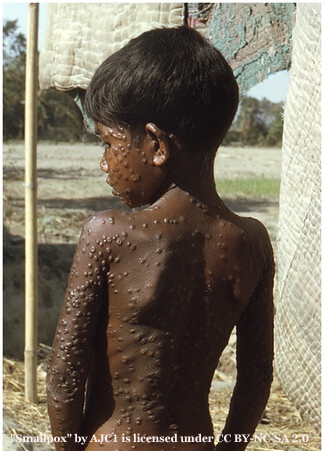 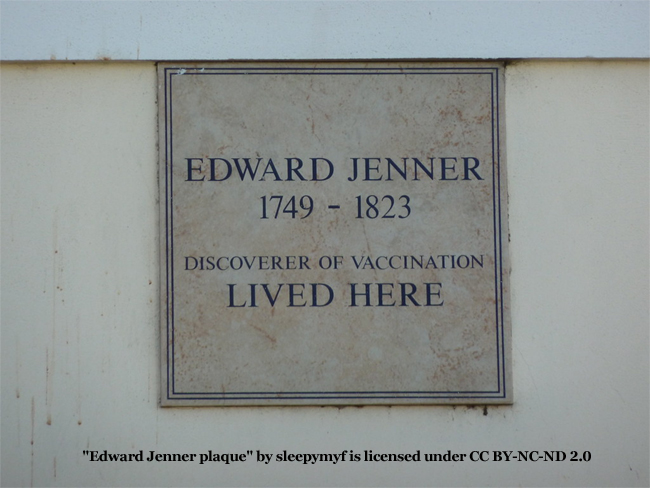 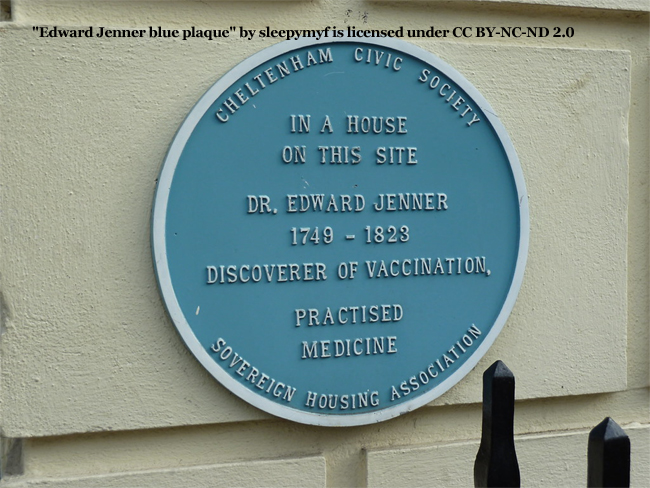 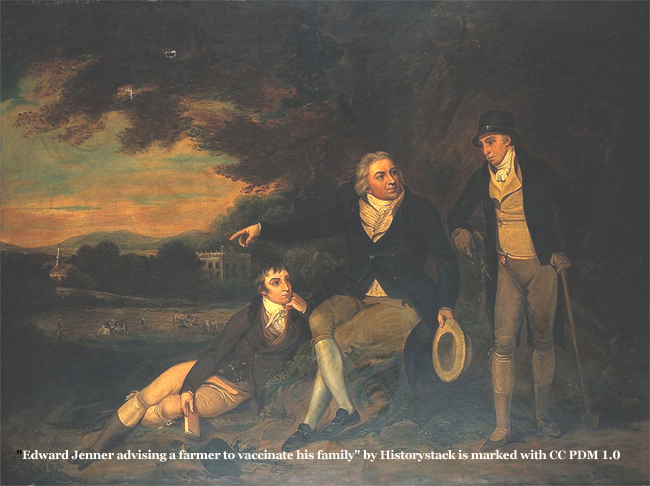 Dr. Jenner Advising a Farmer to Vaccinate His Family 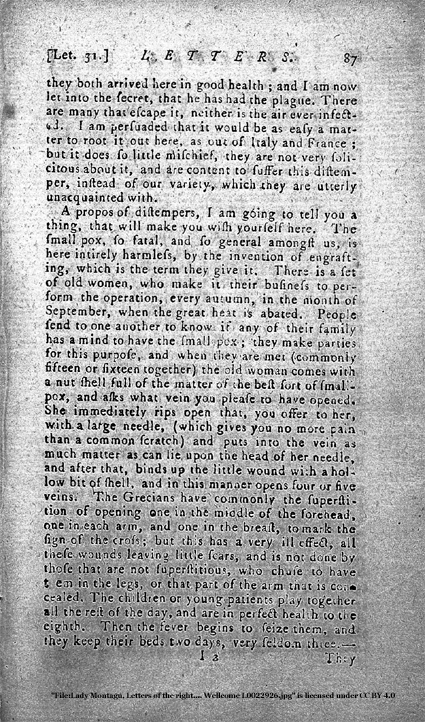