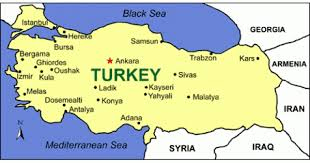 Ladik oriental rugs were woven for centuries in the town of Ladik in the province of Konya located in Central Turkey. Ladik is about 20 miles northwest of the city of Konya in the area that is also known as Anatolia (called Asia Minor by the Romans).

Konya was the capital of the Turkic Seljuk Empire, the home of the dynasty that ruled parts of Central Asia and the middle East from the 11th to the 14th centuries. It was a very important communication and political center at that time. The advance of the Seljuk Empire marked the beginning of Turkish power in the Middle East.

It is believed that both pile and pileless (flatweave or kilim) rugs have been produced in Anatolia since the Neolithic period. Exactly how and when either type of rug was first produced is still unclear. The earliest specimens of knotted rugs discovered thus far in excavations of Turkish burial grounds seem to lend truth to the theory that this type of rug was first woven and used by Turks.

Rugs from the Anatolian region of Turkey are valuable historical documents relating to the socio-cultural and socio-economic values of each period in which they were produced. The significance and symbolism of the motifs used, the dyes and colors employed, and the individual weaving forms and techniques found in traditional hand-woven Turkish rugs are a testament to this fact.

Each of the tribes and peoples of the area were able to adopt what they felt was ‘good’ and ‘true’ from the different cultures they came in contact with. The conditions of isolation and cultural concentration found in the region led to highly distinctive regional styles. Ladik styles have more in common with styles from the neighboring Caucasus regions rather than from those of Persia. 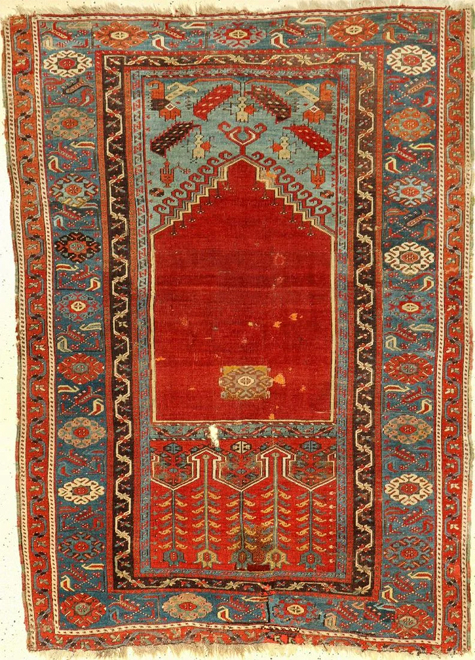 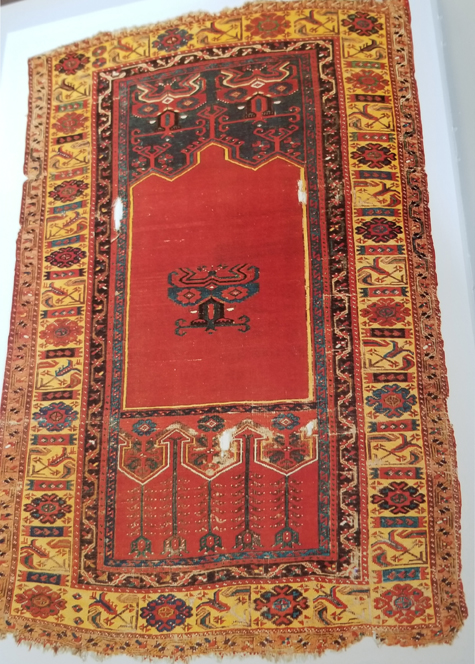 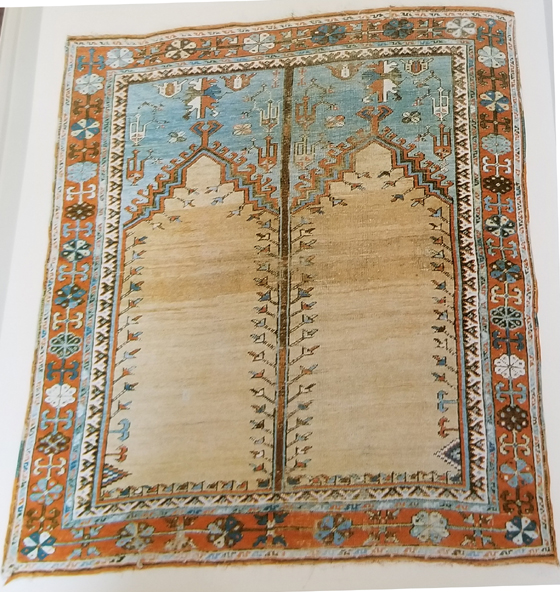 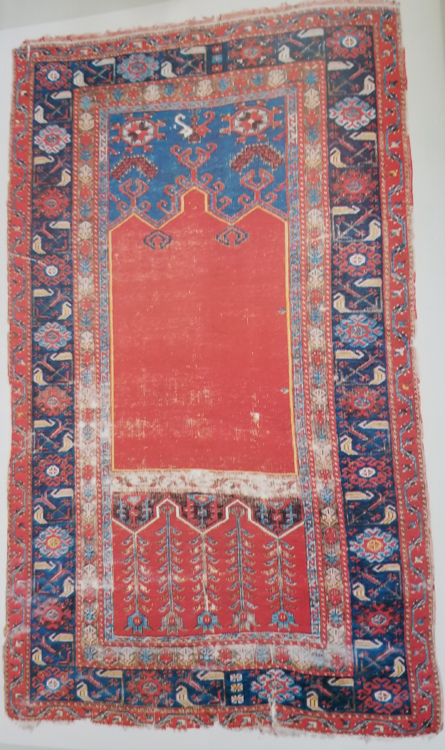 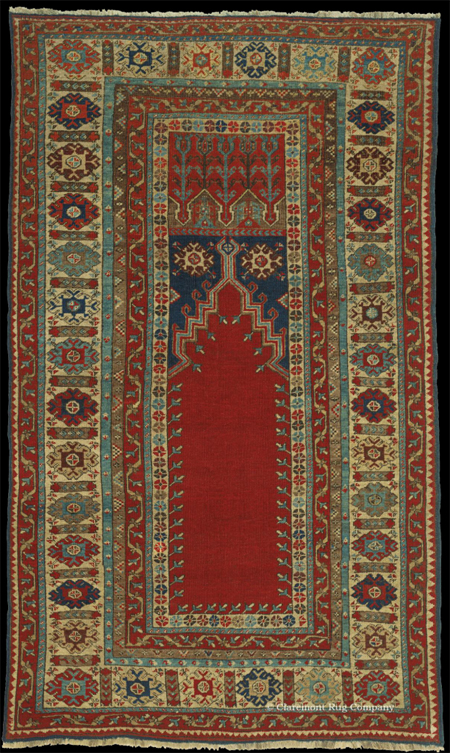 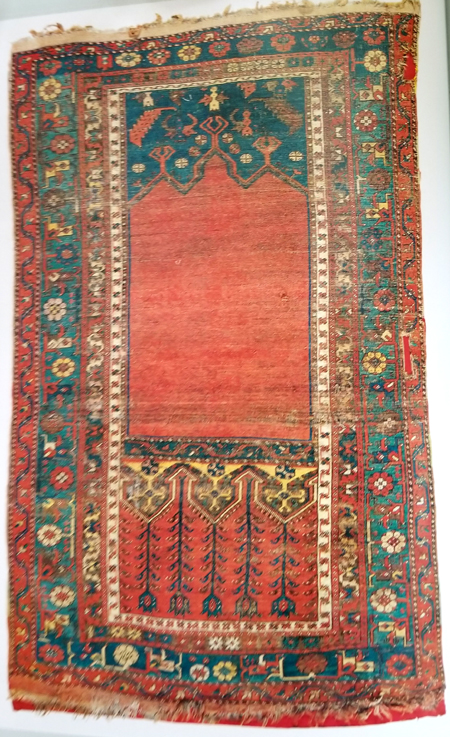 It is necessary to make a distinction between antique Ladik oriental rugs and those available more recently (before production ceased in the last quarter of the 20th century). They are most different in their construction and the dyes and colors used, as well as in their designs.

Most antique Ladik rugs were made in the 19th century, though a few date back to the late 18th century. Ladik was a famous rug making center until the late 1970s. These rugs lost their popularity due to industrial production and the high cost of workmanship and weaving, in general, no longer takes place there. 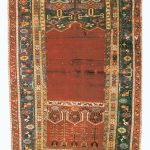 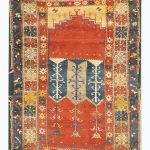 Konya-Ladik is the term used to refer to modern Ladiks. They are different in construction from the antique Ladiks and their floral and medallion designs are adopted mainly from Persian weaving centers such as Tabriz, rather than the designs of the antique Ladiks which were largely adopted from their Caucasian neighbors.

The pile was wool and was short.

The knot was the Turkish symmetrical knot.

The ends were adorned by a flat kilim with braided fringe at both ends.

The sides consisted of 2 cords weft-wrapped with wool.

The pile is wool and is medium thick.

The knot is the Turkish symmetrical knot.

The ends consist of a flat kilim with fringes at both ends.

The sides were overcast with wool.

Antique Ladik oriental rugs were known for their prolific use of the prayer rug format and this is the format we have researched for this article.

The mihrab motif is the prayer niche, sometimes known as an alcove, and is present in many different forms on all prayer rugs. It is a representation of the love of worship and pious belief of the weavers. 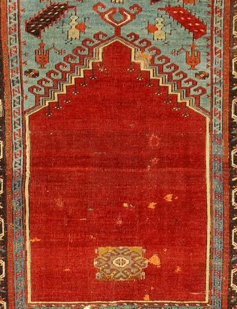 Various forms of the mihrab can be found in the antique Ladik rugs. There can be just one or sometimes three combined mihrabs consisting of a large one in the center and 2 smaller side ones supported by slender columns which stand on large bases. This motif actually dates back to a 16th century Ottoman court design. 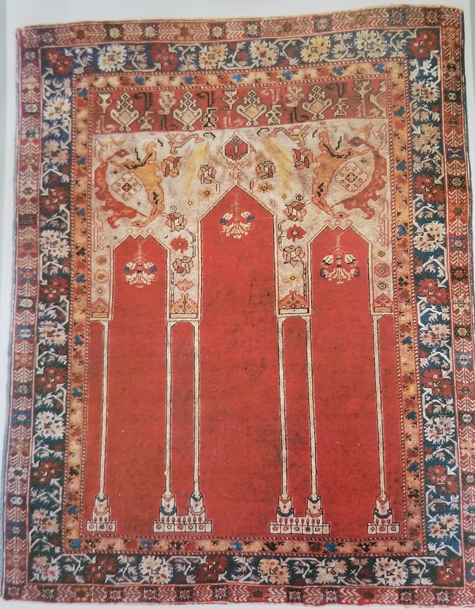 The mihrabs typically have plain red, blue or beige colored backgrounds or may even contain a pattern. The mihrabs themselves can come in various shapes, such as a bow or arch.

Three mihrabs may be in the form of a stylish staircase, sometimes decorated with small hook motifs. If just a single mihrab, it can be stepped and form a plain triangle with hooks on the outer edges, topped by a finial.

Ladik rugs are also known for their stylized tulips with stems motifs. These can often be found at the top or bottom of a mihrab and often in odd numbers. In early Ladik rugs, the panel of tulips usually crosses above the mihrab. On later rugs the tulips bloom upside down in a panel crossing below the niche. Along with the tulips, floral motifs and trees are often found arranged in a row.

An oil lamp, a ewer, lanterns, candlesticks, leaves, and a flower bouquet as well as combs are often added as decoration. The ewer is a symbol of belief in the need to perform ritual and general cleanliness.

The edge of the rug was often decorated with cartouches and various floral motifs. The border can consist of a main border stripe with 2 or 3 narrow stripes repeated on each side. The narrow stripes are usually alternating bands of black and white and each narrow band will contain a succession of unconnected, separate small designs. The main border in many of the oldest specimens has the Rhodesian lily design alternating with the rosette motif. Often a date will be inscribed in a niche.

Nested geometric design in the form of rectangles is a symbol of the garden of the heart. This garden is embellished by the weaver with symbols and signs of all the possessions she wants. A carnation is an indication of desire. Flowers and stars are happy looks at the future.  For a more in-depth article on motifs in Turkish rugs, please read here.

Only natural dyes were used in antique Ladik rugs. Most of these dyes were obtained from the leaves, roots, and fruits of various plants.  The plants were maintained in pastures specifically for the weavers to obtain their dyes. These pasture can be found in every region where rugs are woven. The dye formulas have been used and passed down to generations for centuries. Some examples are:

Red: From the bark of the red pine and leaves of the hazelnut tree.

Yellow and its varying tones: From the flowers, stems, and roots of plants such as broom, sumac, spurge, and saffron. 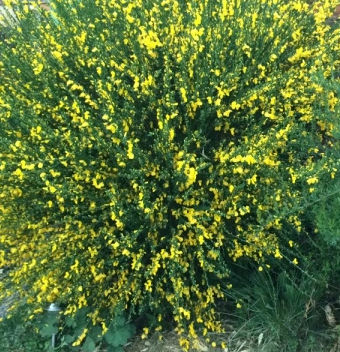 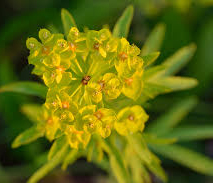 Brown: From the bark of the gall oak and black oak, black oat root, walnuts, and the leaves of the walnut tree.

Black: From sumac and soot.

The colors in these rugs had symbolic meanings as well:

Yellow: Expression of passionate love, yellowing and fading away.

Intertwining of Reds and Blues: Expression of a joy of living.

Brown tending towards Copper: Expression of a feeling of confidence.

The rugs were typically small in size and long and narrow. 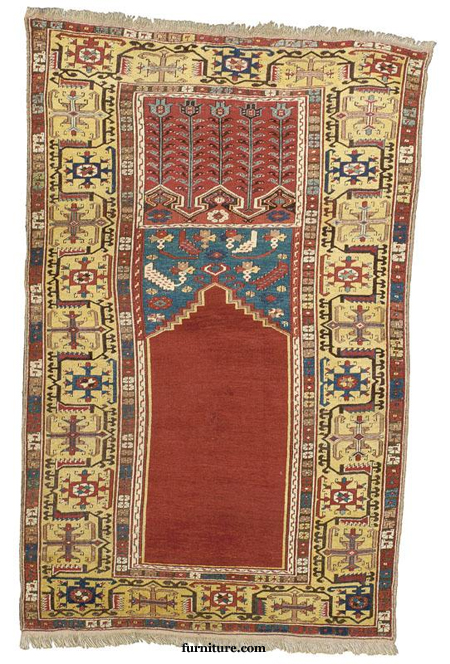 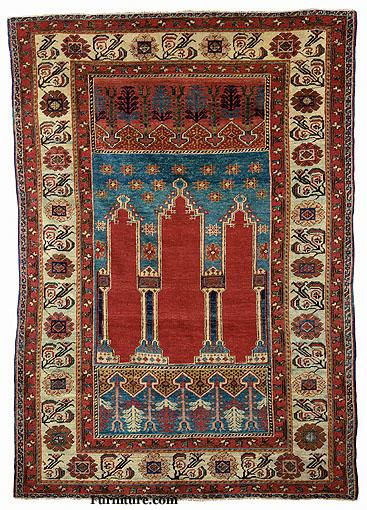 The entire art and craft of the rugs of the Anatolian region underwent serious changes by the introduction of synthetic dyes from the last third of the 19th century onwards. The mass production of cheap rugs designed for commercial success has brought the ancient tradition close to extinction.

In the late 20th century, projects like the DOBAG Carpet Initiative (an acronym for Natural Dye Research and Development Project),began the revival of the tradition of Anatolian rug weaving using hand-spun, naturally–dyed wool, and traditional designs. The Dobag project has produced superior carpets since 1981 with natural plant dyes and traditional Turkish motifs in the villages in northwestern Anatolia.

A number of institutions in Turkey, such as the Turkish Cultural Research Association, The Society Carpet-Weaving Foundation, as well as the Ladik Public Training Center have also stepped in to help bring back traditional rug weaving in Turkey.

Antique Ladik rugs were not woven for commercial purposes but as trousseaus and gifts, and the majority did not survive the ravages of time. Thus it is fortunate we are still able to see these rugs through the Turkish tradition of pious endowment. The mosques that could be found in even the smallest village were furnished with some of the finest specimens of rugs and kilims produced in looms in the home. Ladik rugs were among the prayer rugs and others that were specially woven for the early mosques. Many of the Ladik prayer rugs found in mosques throughout Turkey were probably votive gifts given in the year recorded on the rugs.

Antique Ladik rugs are sought after today by museums and collectors everywhere in the world.