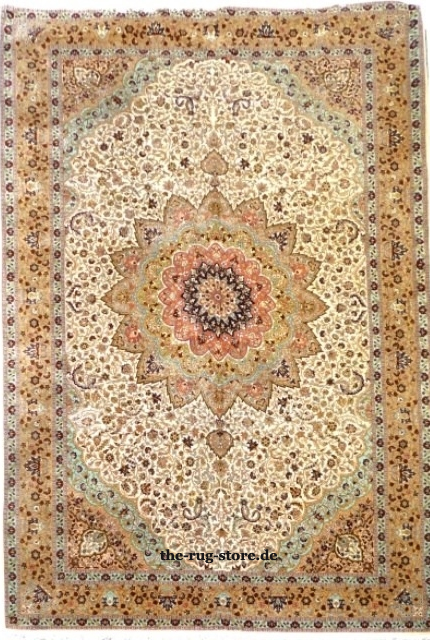 Hereke oriental rugs originated in the coastal town of Hereke, almost 200 years ago, on the north shore of Izmit bay in northwest Turkey. Hereke is approximately 40 miles southeast of Istanbul. 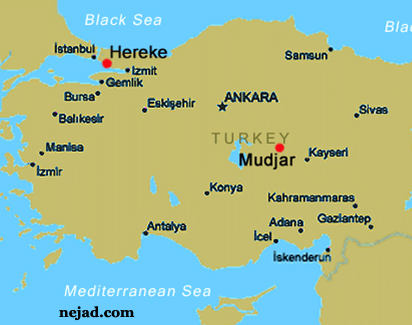 Turkey was an integral part of the Ottoman Empire for centuries. At its height, the Empire included the area from Hungary in the north to Somalia in the south and from Algeria in the west to Iran in the east. 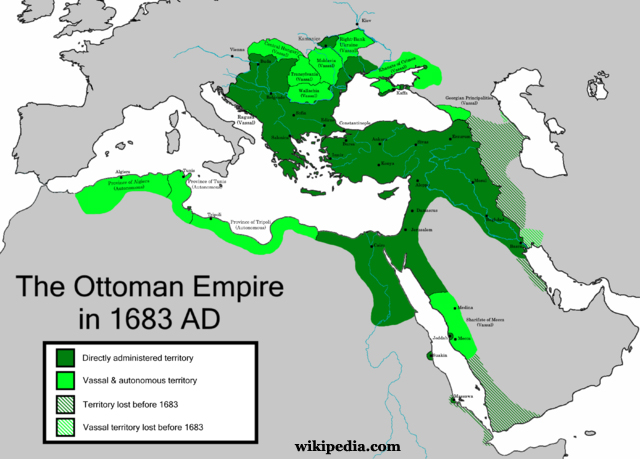 Ottoman Empire at its Peak

The sultans of the Ottoman Empire were all members of the House of Osman and ruled over the transcontinental empire with an iron hand from its inception in 1299 to its dissolution in 1922. The city of Bursa in Anatolia was the first capital. In 1366, the capital was moved to Edirne and in 1453 the capital was moved to Constantinople (now known as Istanbul).

The Ottoman sultan, Abdulmecid I played an essential role in the establishment of the town of Hereke and the weaving of Hereke oriental rugs. He founded the Hereke Imperial Manufacture in 1841 with the sole purpose of furnishing his palace, Dolmabahce, built from 1843 to 1856. The best artists and rug weavers were called from the cities of Sivas, Ladik, and Manisa to Hereke to produce the highest quality rugs, fabric, upholstery, and curtains for the palace.

In 1843, a rug making school was established in Hereke, where both Muslim and Christian women and children attended classes. In 1878, the factory burned to the ground but was rebuilt in 1882. Today this factory continues to operate as a museum-factory.

In the years following the construction of Sultan Abdulmecid I's palace, Hereke rugs were woven only to furnish other royal residences or given as gifts to visiting royals from countries such as Japan, Russia, Germany, and England.

It wasn't until 1890 that a number of traders in Istanbul were allowed to sell some of the rugs woven in Hereke.

With the end of the Ottoman Empire in 1922, the production of Hereke rugs was restricted until the middle of the 20th century when some master weavers in Hereke once again began weaving Hereke oriental rugs, continuing the tradition of the Ottoman palace rugs.

Today, Hereke rugs are still made with the traditional patterns of Sultan, Abdulmecid I, as well as both traditional Anatolian and contemporary figurative patterns. Unfortunately, the actual town of Hereke no longer technically exists since it lost its municipality status in 2008 due to an insufficient population.

The construction method used to create Hereke oriental rugs is unique. Rather than placing the warps (up and down cords) next to one another as in most other construction techniques, two sets of warps are used. The first set of warps is located in front of the second set. This allows for the use of a second weft (side to side thread which interlaces through the warps). This weft is thinner and zig-zags to securely hold the knots in place should the rug be damaged. The knots are then tied a second time using the Turkish or Ghiordes symmetrical knot. This makes for an extremely durable rug with well-defined patterns.

The materials used to make Hereke oriental rugs include silk, a combination of wool and cotton, and sometimes gold or silver thread is used. These rugs can be found made with wool or camel hair or silk on a cotton foundation as well as silk on silk.

A genuine, pure silk Hereke oriental rug always uses silk from the city of Bursa in Turkey. Bursa has for centuries produced the highest quality of silk. Bursa was a station on the famed Silk Road and a world trade center of silk cocoons and silk fabric.

When wool is used for these rugs, only the finest wool known as cork wool is used. This wool comes from the neck of the sheep and has a high content of wool grease (lanolin), making it soft and easy to work with.

The rugs are generally very large, although the silk on silk rugs are made in smaller sizes. Some silk Hereke rugs have from 3000 to 4000 knots per square inch. Those made of wool are typically in the 1200 knots per square inch range.  All fine Hereke rugs, especially the silk on silk ones, are very labor intensive and even the small rugs can take more than a year to complete.

Because of their construction, the Hereke rugs have more curvilinear designs and show more Persian influenced patterns than most other Turkish rugs. The silk Herekes typically come in soft pastels with intricate floral motifs such as the carnation, tulip, rose, crocus, lilac, hyacinth,and plum blossom. Quarter medallions are often found in the corners.

(Not all motifs pictured are specifically from Turkish rugs and it should be noted there are many variations of all symbols.)

Almond. This motif symbolizes the duality of love and passion, night and day, and male and female. It is the Turkish representation of the boteh, a common motif in Persian rugs.

Almond or Boteh Motif Meaning Duality of Love and Passion, Night and Day, and Male and Female.

Flowers of Seven Mountains. This symbol denotes Istanbul which was built on seven hills and symbolizes the flowers of those hills. 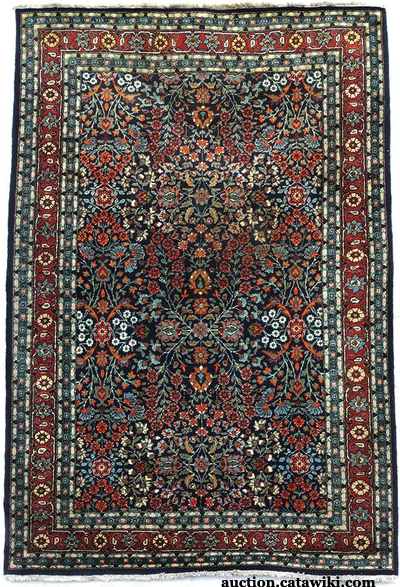 Flowers of the Seven Mountains Motif

The tulip is the symbol of love and peace and prosperity. It was actually a symbol of a period in Ottoman history called the ‘Tulip Era’ At that time there could be 48 different kinds of tulip motifs found in ottoman rugs. Today, some of the tulip designs used in Hereke rugs are entirely different from those of the Tulip Era. 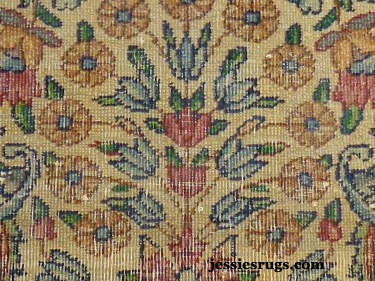 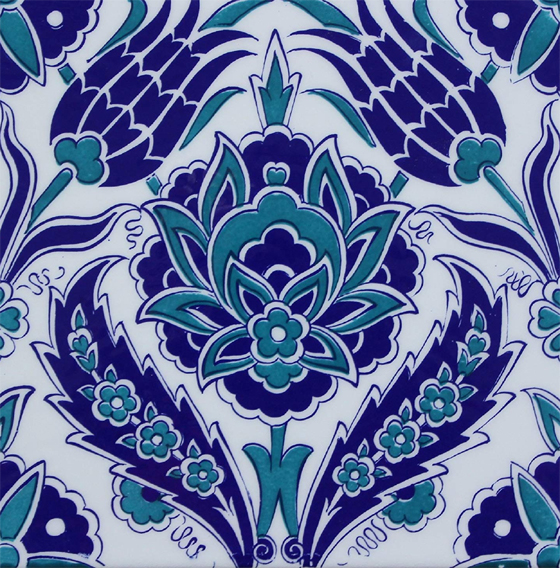 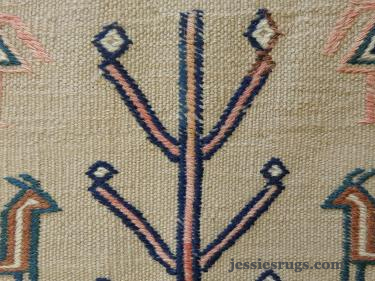 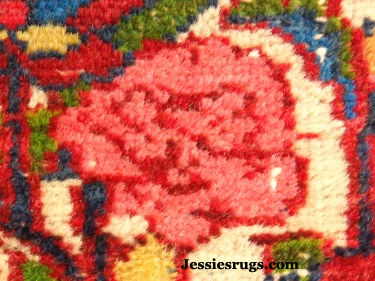 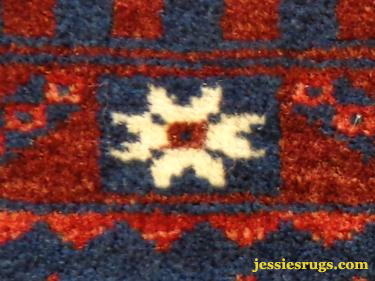 The dominant colors are dark blue, cream, and cinnamon, and occasionally yellow and green. Only natural dyes are used, never synthetic.

Copies of Hereke oriental rugs are currently produced in China, particularly in Zhenping in Henan province. These Chinese imitations do not use the same production techniques nor the same quality materials as genuine Turkish Hereke rugs but they are quite beautiful and can easily fool someone who does not have a good knowledge of different types of oriental rugs.

China actually named a manufacturing complex for these rugs as the Hereke Industrial Zone and now labels them as 'Made in Hereke.' As mentioned above, the loss of the municipality status of the town of Hereke in Turkey only helped Chinese efforts to perpetuate this imitation of the centuries old Hereke rug industry.

How to Ensure Your Hereke Rug is not a Chinese Copy

The origin of the rug.

A picture of the rug.

The name of the pattern.

Please feel free to call or text our office at 607-272-1566 or stop in at 130 Cecil Malone Drive, Ithaca, NY with any questions you might have about Hereke or other oriental rugs.

Our office hours are 8 to 5 Monday through Thursday, closing at 4:30 on Fridays. We are also open for your convenience every Saturdays from 10 to 1.

You can also email us at abcorientalrug@gmail.com. 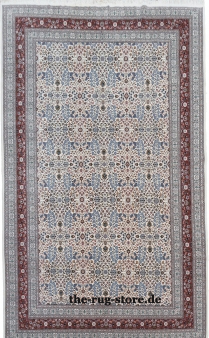 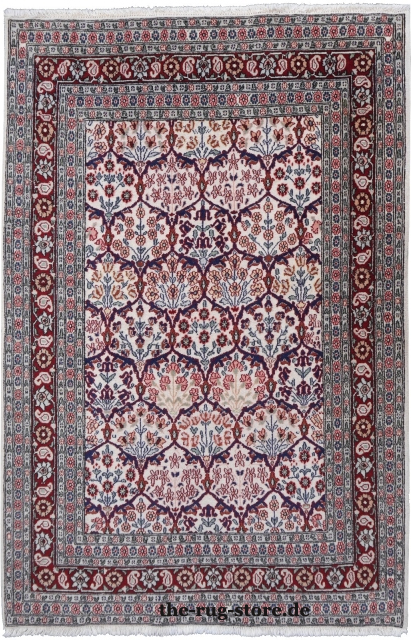 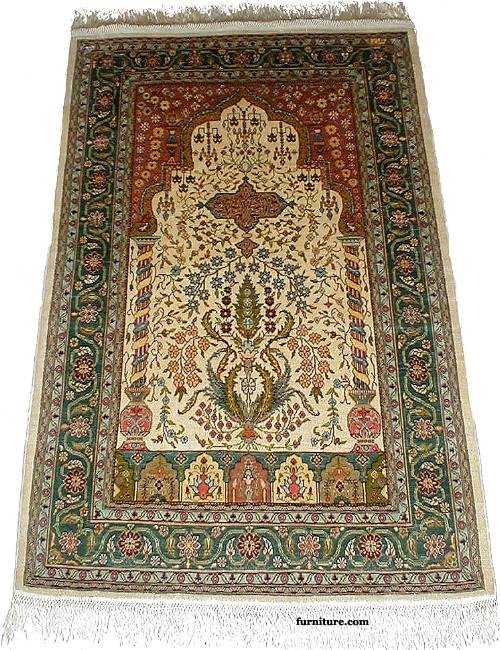