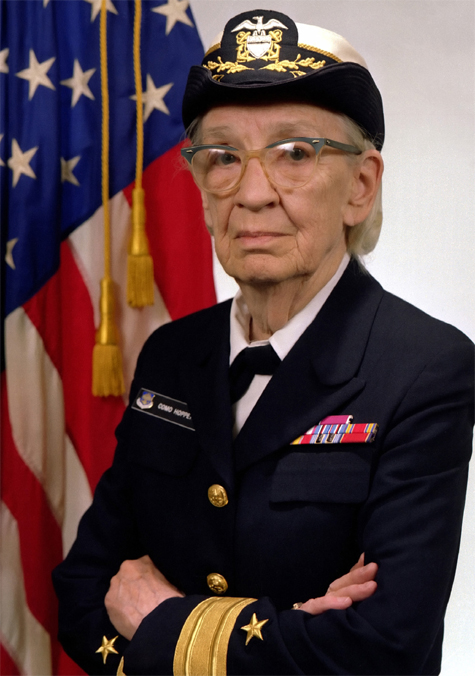 Grace Murray Hopper was a woman who possessed extraordinary insight and determination and made lasting contributions in several fields where women were not always welcome. She succeeded as a brilliant mathematician, a computer technology pioneer, and a US Naval officer in a life that spanned nearly the entire 20th century.

Grace Murray Hopper had the fortune to be born in 1906 into an upper middle class family. Her father was a successful insurance broker and her mother had pursued a career in geometry by special arrangement, since it was not a job encouraged for the women of the time period. Both parents believed their daughters should have the same access to education as their brother. Thus, her parents, with this progressive view of education, firmly encouraged Grace’s pursuit of higher learning.

That year, she married Vincent Hopper, an English teacher from New York University.

DR. GRACE MURRAY HOPPER and
THE US NAVY

After the outbreak of WWII, Grace decided to follow in her great- grandfather’s footsteps and she enlisted in the US Navy in 1941, his branch of the armed forces. Unfortunately, she was rejected because did not meet the weight and height requirements. She was too small, just 5'2 and less than 100 pounds!

In 1943, she took a leave of absence from Vassar College where she was an associate professor in mathematics, to join the Midshipman’s School for Women in the US Navy Reserves. Grace graduated first in her class as Lieutenant Junior Grade Grace Murray Hopper.

DR. GRACE MURRAY HOPPER at HARVARD and the
MARK I, II, and III

The Navy, aware of her excellence in mathematics, assigned Grace to work with the MARK I computer at the Bureau of Ordnance Computation Project at Harvard University under Commander Howard Aiken. The MARK I was the first computer automatically sequenced to calculate the angles for the naval guns when the weather was going to be bad. 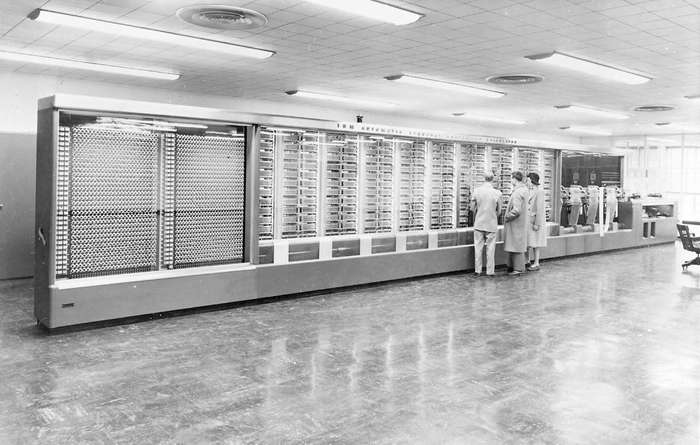 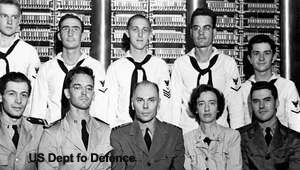 At Harvard, she learned to program the MARK I computer and it was here where she came up with the idea of writing down common bits of code and storing that code on the MARK I. She called them subroutines. Then she figured that she could instruct the computer to call the desired routines and execute the command. That idea she called a 'compiler', a fundamental concept in computer code today. Not everyone was immediately impressed. It took her some time to prove that computers could do more than just arithmetic and that they could actually write programs!

During the building of the Mark II, the computer suddenly and for no apparent reason stopped. Upon inspection of the computer, Grace and her team found a moth which had flown into a relay from an open window. The moth had been pulverized by the relay and consequently had caused the device to fail. The term 'bug' was thus popularized to signify any system malfunction.

After the War, Grace and her husband divorced and Grace again decided to reenlist in the Navy. Unfortunately, she had just turned forty and the maximum age was thirty-eight, so she was forced to leave. She decided to remain at the Harvard Computational Lab as a member of the Naval Reserves and turned down a full professorship at Vassar. At Harvard, Hopper continued to work on the Mark II and the Mark III. 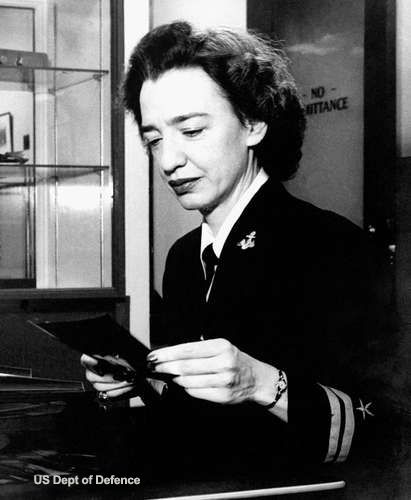 DR. GRACE MURRAY HOPPER and
THE FLOW-MATIC and COBOL

In 1949, Dr. Hopper joined the Eckert-Mauchly Computer Corp, eventually bought by Remington Rand, where she joined the team developing the UNIVAC I computer doing pioneer work in compiling mathematic code into a language.

In 1952, she had a running compiler which was able to translate a programmer’s instructions into computer codes. In 1957 she helped develop the FLOW-MATIC, the first English-language data-processing compiler.

By 1957, three major languages existed for computers: APT, FORTRAN, and FLOW-MATIC. Each language, however, could only operate on a specific platform and  the use of a single, uniform format came into demand. Grace also realized a need to make the computing process more 'layperson friendly.' She pursued different avenues to achieve this goal. The universal language to remedy this problem was COBOL, and even though she was not involved in that project, much of it was based on Grace’s FLOW-MATIC.

THE US NAVY RETIREMENT and RECALL

Grace eventually achieved the rank of Rear Admiral in the US Navy. She retired from the navy with the rank of commander in 1966, but was recalled to active duty the following year to help standardize the navy’s computer languages.  In 1983, she received the rank of Commodore, which in 1985 was renamed to Rear Admiral. She was one of the few women Admirals in the Navy. At the age of 79, she was the oldest officer on active US Naval duty when she retired again in 1986.

On January 1, 1992, Grace Hopper died of natural causes at the age of 85. She was interred with full military honors in Arlington National Cemetery. 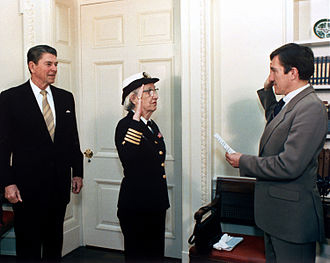 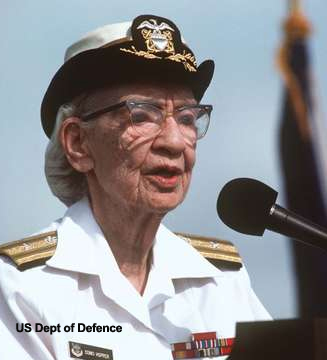 Some of the following remembered quotes of Grace Hopper show her determination and persistence to keep opening minds and trying new ways of doing things:

Throughout Grace Hopper’s life she was awarded 40 honorary degrees from universities across the world and received many other awards, some that other women had never been recognized for.
Even after her death, Grace continues to influence people's lives, especially women.

Her legacy was an inspiring factor in the creation of the Grace Hopper Celebration of Women in Computing. Held yearly, this conference is designed to bring the research and career interests of women in computing to the forefront.