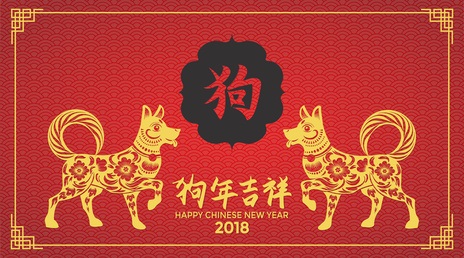 For those of us who have had the privilege of living with dogs, this article, Dog Myths Debunked, is meant to examine a few of those long-standing notions that have been passed down through generations of dog lovers and 'generally accepted as true.'

Who of us has not heard:

How many of these and others have you heard and just accepted as pure fact?

2018 is the Chinese Year of the Dog so we decided to honor the dog and check out a few of these. We searched the Internet for the information. Here are our results…

DOES A DOG REALLY AGE 7 YEARS FOR EACH HUMAN YEAR? 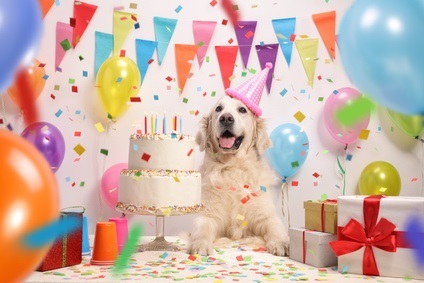 When you compare dogs and humans this way, it at first seems to make sense because the lifespan of a dog is so much shorter than the average human’s. It also follows that dogs age much faster than humans.

The problem with the ‘seven years’ is when you look at very young dogs (many before they are a year old) having puppies and older dogs (12 to 15 years old) who are still active and healthy compared to humans from 84 to 105, this dog myth doesn’t hold much water.

Of course, there are other factors that contribute to a dog’s aging. These include the type of breed and the size of the dog. As a general rule, dogs will age at a faster rate when they are young and their aging seems to slow down as they get older. And, although larger breeds tend to have a shorter lifespan, they age much more slowly than the smaller breeds.

IF YOUR DOG'S NOSE IS WARM, DO YOU HAVE A SICK DOG? 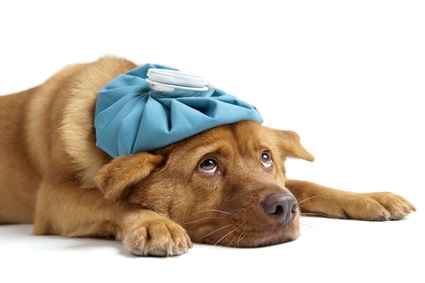 The problem with this myth is  the dog’s nose is not an accurate measurement of an illness. This is especially true with dogs after a night’s sleep. They may wake up with a warm or dry nose and this poses no problem. Of course, if a dog’s nose is continually dry or crusted over or looks abnormal, it is time to visit your vet.

Although vaccines for distemper have brought the disease down to only rare occurrences, this particular myth may have originated with the hardening of the noses of afflicted dogs. A cool, wet nose was a sign your dog had not contacted canine distemper.

IS A DOG'S MOUTH REALLY CLEANER THAN OURS? 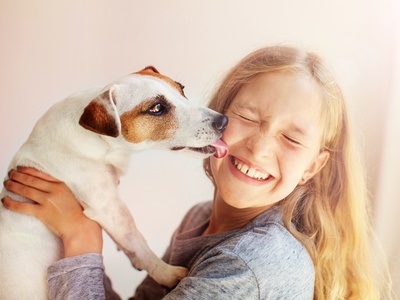 Should we not be worried if our dog licks our face or eats off our plate? Is a dog's mouth really cleaner than ours?

I have to admit I really believed this! It seems strange I would have taken this dog myth for the truth even though over time I had seen some very gross things enter into my dogs’ mouths! For instance, the contents of the baby’s diapers!!

In addition, dog owners are not always as particular about their dogs’ teeth as their own, so dental bacteria and tartar can add to the germs in a dog’s mouth as well as to the distinctive odor of ‘doggie breath.’

Fortunately though, most dog germs tend to be specific to dogs and they don’t necessarily cause harm to humans. A ‘kiss’ from a healthy dog, one that has been de-wormed and had the required vaccinations, is probably nothing to worry about. Baby should definitely not be sharing your dog’s water bowl though!

WILL A FEMALE DOG FEEL A 'VOID' IF SHE DOES NOT HAVE A LITTER BEFORE BEING SPAYED?

This one has always perplexed me. To think that a female dog that has been spayed would feel ‘empty’ if she had not had a litter of puppies seems really to be anthropomorphic (applying human attributes to non-humans). We love our dogs but we have to be very careful not to fool ourselves into believing they think like humans do.

Although there are some who believe there might be health benefits to allowing a female dog to have a litter, that has not yet been proven to be true and unless you are a responsible dog breeder with a superb female dog specimen, you are simply contributing to dog overpopulation.

DOES A DOG EAT GRASS TO SOOTHE A QUEASY STOMACH? 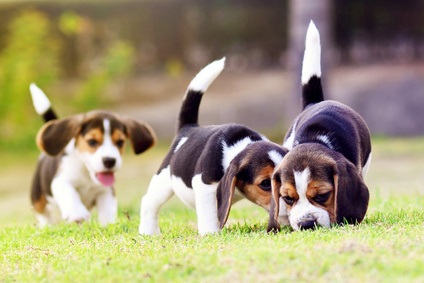 We have all probably seen the reason for this myth in action. A dog goes outside and starts chomping on the grass and then throws up. Oh, look. He feels better now. His stomach must have been upset!

The real truth is that dogs simply like grass. If they eat too much, the minor irritation it causes will make the dog throw up.

As long as the grass your dog loves has not been chemically treated, there should be no reason to worry. However, if your dog has chronic vomiting after eating anything, this may be a sign of an illness that needs to be treated by your vet.

IS A WAGGING TAIL ALWAYS INDICATIVE OF A HAPPY, NON-AGGRESSIVE DOG? 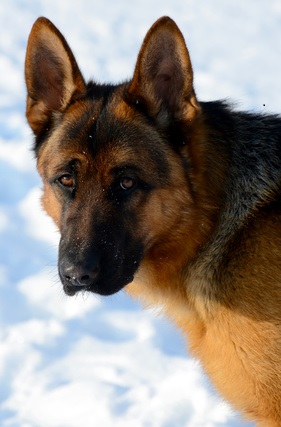 This is an over-simplification of a myth which has a lot of truth in it. In general, a happy, joyful dog will wag its tail.

The problem is, when meeting a strange dog especially, attention must be given to the overall body language of the dog, not just its tail. A wagging tail can sometimes be a possible sign of aggression. It can also mean fear or anxiety.

Even a basically happy, loving dog can be aggressive with strangers, especially the more protective their disposition is.

Do aggressive games, for example, tug of war, actually reinforce aggression in dogs?

This is a misconception that seems to come from watching dogs growl and snarl when playing these games. In actuality, our dogs are predatory in nature and these types of games can actually decrease aggressive and dominant behavior emotions in dogs.

The real question is…Should the dog or the human win? The answer would seem to depend on the overall behavior of the individual dog. Some may gain confidence by winning, others might feel shamed. On the other hand, if your dog does not appear to have any real behavior problems, it doesn’t really matter who wins or loses.

Contacting a professional dog trainer for advice on your particular situation may be the best route to take if you are on the fence with this one.

CAN DOGS ONLY SEE IN BLACK AND WHITE OR SHADES OF GRAY? 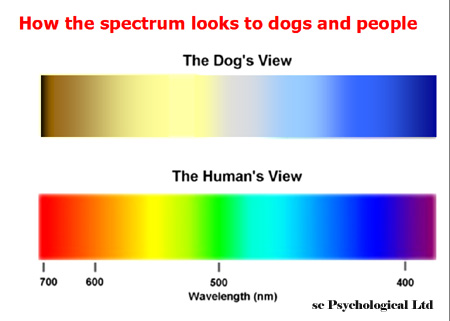 Color Spectrum of Humans and Dogs

Yes, this is another one I took for the truth! Dogs simply do not see color the way humans do. This is evidenced by the type of cones or color receptors found in their retinas.

Humans have 3 types of cones that allow them a full spectrum of color while dogs only have 2 types. Thus, color vision in dogs is more limited than that of humans. Their perception of colors is very close to that of humans with red/green colorblindness. They can see in blue, greenish-yellow, yellow, and various shades of gray.

Dogs are also more near-sighted than most humans. What a human can see at approximately 75 feet, a dog can barely make out at 20 feet, making their vision approximately 20/75.

Additionally, dogs are much worse at differentiating differences in brightness or in the ability to distinguish different shades.

We only need remember a dog may not see as well as a human but what the dog  loses in sight is made up by an incredible sense of smell. We might say the dog can see in scents what he misses in sight!

CAN YOU TEACH AN OLD DOG NEW TRICKS?

Unfortunately, this one is often applied to older humans as well!  It may well be that dogs are simply not interested in doing certain things as they age and some may have grown stubborn as well. (Older people often seem stubborn or ‘set in their ways.’)

To be fair, as with humans, older dogs may not see or hear as well and some tricks may be too demanding for an older dog’s energy level. And, some older dogs can experience senility as well. This would make it difficult for them to retain new information and make them less responsive to training.

With an older dog, it is important to first get their attention and then keep their interest with their favorite toys or treats. 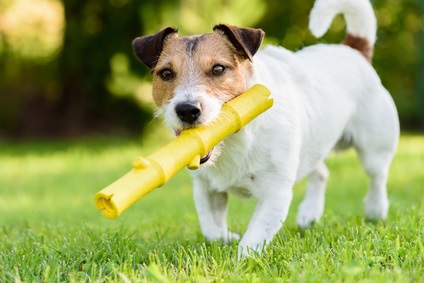 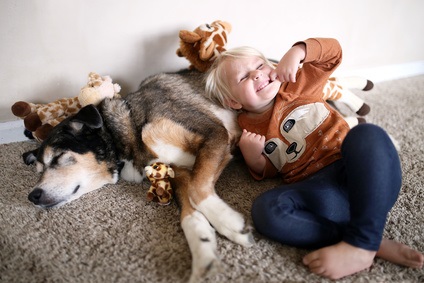 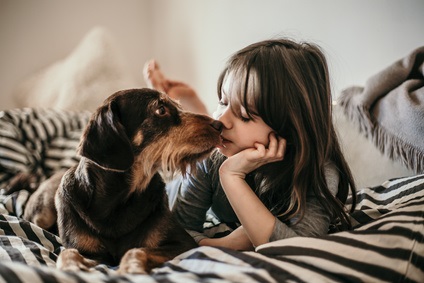 Girl With Dog On Bed 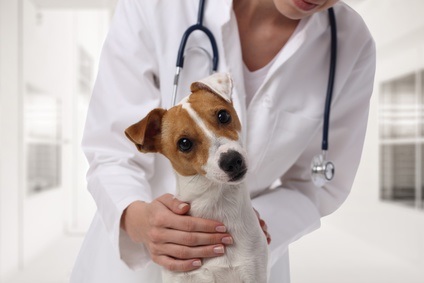 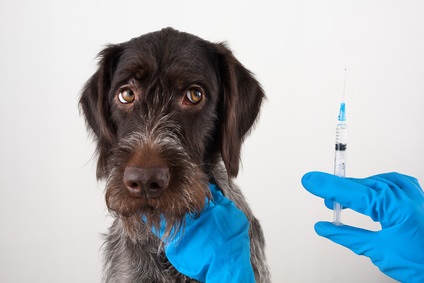 Dog Getting a Vaccination 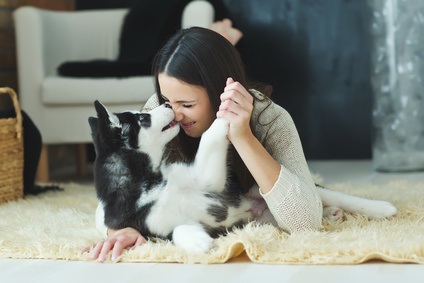 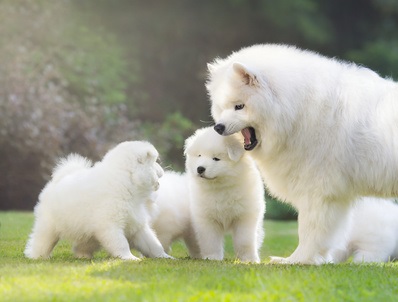 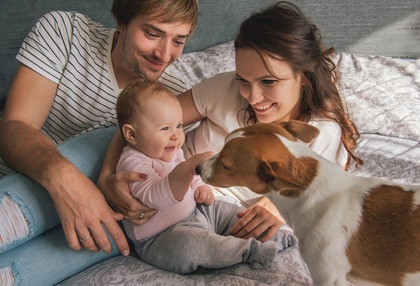