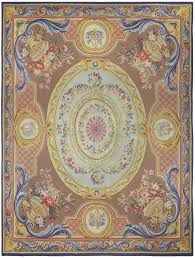 Aubusson rugs had their beginnings during the Renaissance era (1300s to 1700s) in Europe. We usually associate rug weaving with the East, but the Aubusson rugs of France (as well as the French Savonnerie rugs ) were an important part of the history of rug design in the West. These rugs were outstanding examples of French carpet designs which were not influenced primarily by the art of the East.

Aubusson rugs were a very significant part of the revival of the arts of the Renaissance period, especially during the long reign  of Louis XIV of France (72 years-1643-1715). The French monarchy under Louis XIV (also known as the Sun King), made France the dominant power in Europe. His reign brought with it the greatest age of French culture. The arts were fully supported and industry flourished. 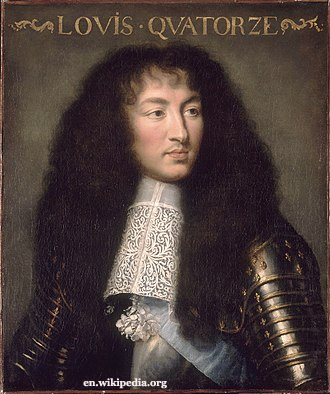 The very first looms were probably set up by Flemish refugees in the 1300s in Aubusson, a town located on the banks of the Cruese River in central France, approximately 200 miles from Paris. The actual production of tapestry and rugs did not begin in Aubusson until the 16th century. The original fine tapestries that were created during Louis XIV’s reign morphed into the magnificent rugs and carpets we know today as antique Aubusson rugs and carpets. 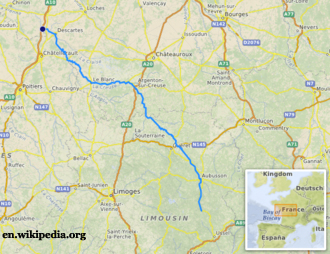 THE ORIENTAL RUG COMES TO FRANCE

In the first half of the 16th century, France and the Ottoman Empire began diplomatic and trading agreements. France also began importing knotted-pile carpets from Persia and other eastern Mediterranean regions, exchanging French luxurious goods such as silver for them. It wasn’t long before the oriental rug style became a significant trend in renaissance Europe.

The antique rugs were brought to France to establish factories to produce oriental rugs for French regal palaces only. A famous carpet and rug factory, the Savonnerie carpet and rug factory was located where the Museum of Modern Art in France currently stands and was begun in the building of a former soap factory. (The French word for soap is Savon.)

The artists and weavers of the Savonnerie rugs were of the royal courts, and their productions, in the form of fine needlepoint and tapestries, were only available to the King. Savonnerie designs used naturalistic floral motifs, coats of arms and heraldic devices as well as some architectural images. 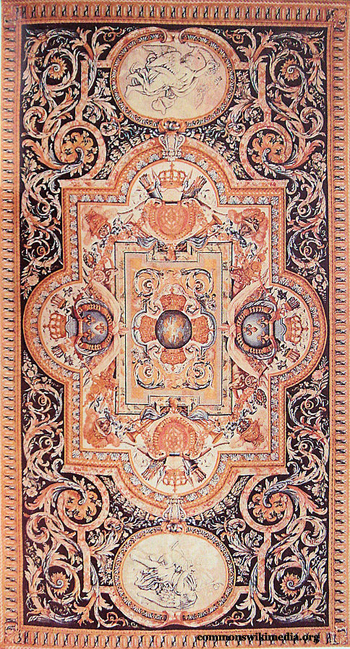 The early Aubusson rugs were originally based on Turkish designs, elegantly produced in modified oriental motifs, many with intricate patterns such as the Ushak medallion carpets. 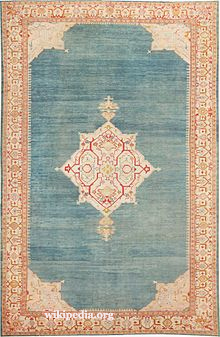 In the 2nd half of the 17th century, their designs changed to mimic the floral and architectural motifs of the Savonnerie rugs, though in simpler versions. Aubusson rugs were available to anyone who could afford them, usually those in the upper class aristocracy of Europe who did not have access to the Savonnerie rugs.

Aubusson textiles had been handwoven in the village of Aubusson since the 15th century. The word Aubusson became associated with a flat-woven French textile because of the pileless weaving tapestry technique used to produce these rugs. (Piled rugs were also made there.) Many of the antique Aubusson rugs have a medallion in the center with flowers and floral arrays surrounding it.

1870-THE END OF FACTORY CARPET & RUG PRODUCTION IN AUBUSSON

The technology of the 1800s brought advanced weaving manufacture to other parts of the world. Former workers of Savonnerie created Axminster looms and the Jacquard loom. In America, Erastus Bigelow invented the steam-powered loom. Factories around the world had a sudden growth in production and efficiency. These advances affected the manufacturing in France. 1870 saw the end of the factory carpet and rug production in Aubusson.

In the 18th and 19th centuries, tapestry-woven rugs were woven at Aubusson, but not in factories. The 20th century saw style in France moving away from the neoclassical and baroque style and leaning towards contemporary design inspired by abstract art such as cubism, art nouveau, and art deco.

HOW ANTIQUE FRENCH AUBUSSON RUGS WERE MADE

The production of these flat, pileless rugs consisted of a multi-step process. The first step was the washing of raw wool in the River Creuse. Then the wool was carded (individual fibers separated and most remaining impurities removed). Next the wool was spun into yarn which was a very long process. Dying of the yarns came next.

Before any actual weaving would begin, weavers and designers would work together to design the rug with colors, patterns, and pictures. The design would be drawn on a canvas in an inverted format. This was because the Aubusson rugs and tapestries had to be woven from the back and the weavers were only able to see the reverse side!

The 2 elements of the foundation, the warp (up and down cords) and the weft (side to side cords), consisted of cotton linen or tightened wool threads woven with an intricate interlacing technique to produce the flat rug with no pile of the Aubusson rugs. These rugs were actually easier to manufacture enabling them to be custom-made for unusually large spaces in much less time than it would take to weave in pile. That is why so many of them were ordered by the aristocracy for their castles and chateaux.

AUBUSSON-NOT A NEEDLEPOINT OR A TAPESTRY

A needlepoint is constructed of New Zealand wool yarn stitched onto a canvas with a needle. An Aubusson weave is woven, not stitched. An Aubusson woven rug is extremely durable.

A tapestry is a finer weave using smaller yarn. Incredible details can be achieved in a tapestry that would not be possible in a woven rug.

For nearly 200 years, the rugs of the Aubusson weavers were revered throughout Europe. Today, that style, as well as the Savonnerie in the form of fine needlepoint and tapestries, are copied in China, as well as in India, Pakistan, and Iran. Handmade Aubusson designer rugs from India are a rug with a chunky thick wool pile that has been handcarved to accentuate the elaborate florals and scrolls.

In Aubusson today there exists a State Art School in which designers and workmen are taught the traditions of this distinctive rug. 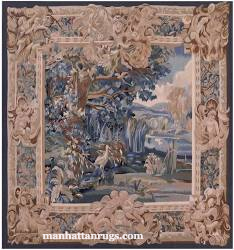 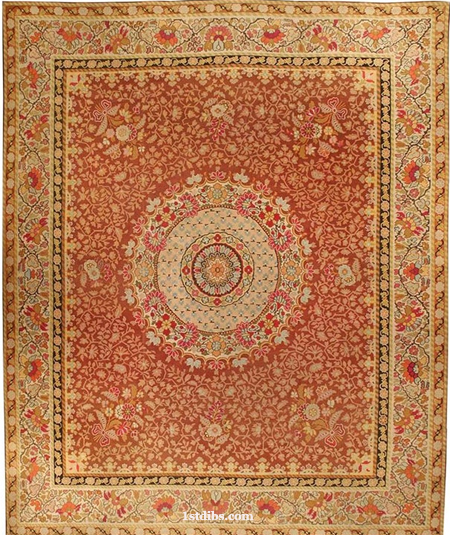 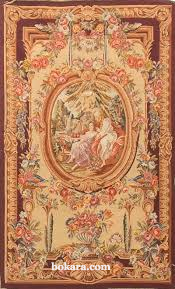 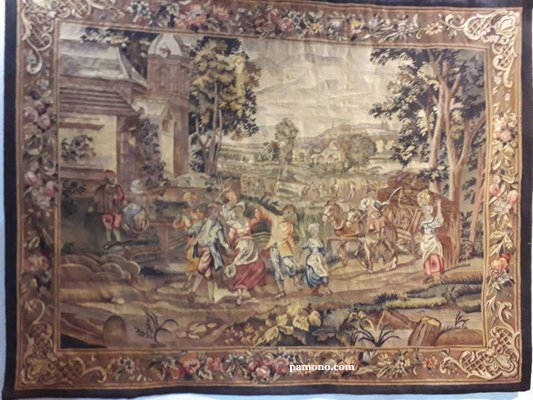 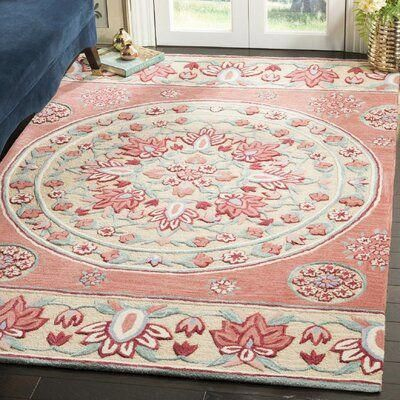 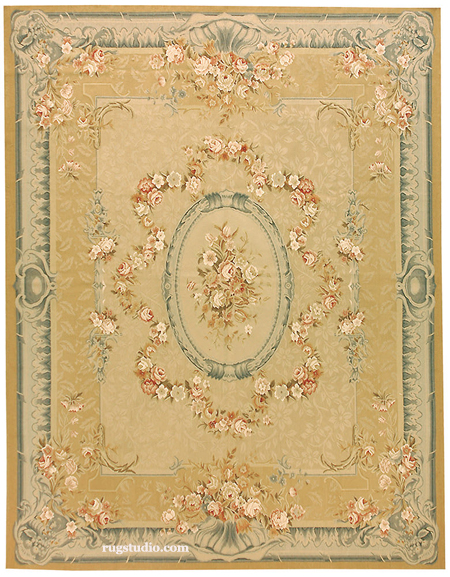 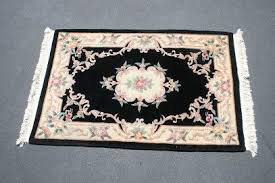