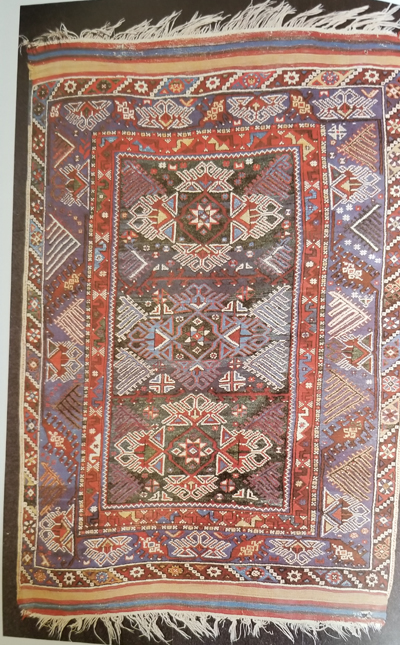 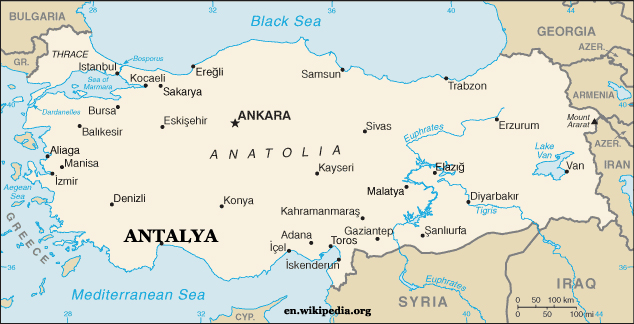 Dosemealti oriental rugs are woven within a large region located in southern Anatolia, Turkey. Anatolia is the Turkish peninsula bound by the Black Sea, the Mediterranean Sea, the Aegean Sea, and the Sea of Marmara.

The small town of Dosemealti is located about 4 miles north of the Mediterranean Sea and the city of Antalya.The large Dosemealti region consists of 23 villages and spans an area north of Antalya to the southern tip of the Taurus (Toros) mountains.

The first village in the Dosemealti region to weave rugs was the village of Kovanlik. The people of Kovanlik descended from the Karakoyunlu (Yoruk) Turkomans, nomads living in the plains in the winters and in the plateaus in the summers. (Yoruk is the Turkish word for nomad, especially those of Turkman origin.) They have woven their rugs in this area since the 15th century.

Yoruk tribes live in an area where the weather is cold. Their rugs have thick piles made of hand-spun wool and are used for floor coverings or hung on walls in order to keep homes warm when the weather gets too cold.

The two main tribes that live in the Taurus Mountains are the Sari Kecili which means yellow goat and Karakoyunlu which means black sheep. They have been able to preserve their ancient heritage to this day.

It is interesting to note that in these two tribes men assist women during the spinning process, an unusual thing in other parts of Turkey. They use goat and sheep wool that is provided by their large herds of livestock. They use vegetable dyes that provide vivid colors for their rugs such as dark blue, reds, and white, which are used for the creation of unique and rare patterns.

The weaving products from this region became popular in the mid 1800s. Unfortunately, the majority of the Anatolian rug production underwent serious changes by the introduction of synthetic dyes from the last third of the 19th century onwards. The mass production of cheap rugs designed for commercial success had brought the ancient tradition close to extinction.

Today, rug weaving still continues in villages in Anatolia, although the number of rugs being made has been reduced. The successful DOBAG project has produced superior carpets since 1981 with natural plant dyes and traditional Turkish motifs in the villages in northwestern Anatolia.

Fortunately, the people of the Dosemealti region of southern Anatolia were able to keep their weaving heritage intact and have continued to make high quality rugs.

The foundation of Dosemealti oriental rugs consists of wool warps (up and down cords) and wefts (side to side cords). The wool is from the sheep of the region and is of very high quality. The warps are natural-colored wool and the wefts are dark-colored consisting of 2 or more shoots. The pile is wool and is generally medium in length.

The ends feature a kilim (flatwoven area) with a braided fringe at one end and looped fringe at the other. 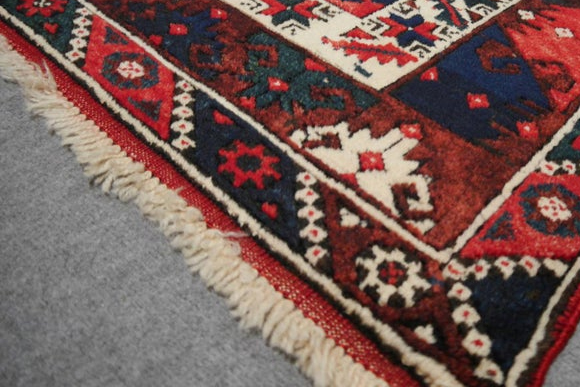 The sides are overcast in wool with a double serge.

THE DESIGN OF
DOSEMEALTI ORIENTAL RUGS

The rugs produced in the Dosemealti villages all reflect the nomadic character, expressed in geometric patterns. The Dosemealti rugs resemble those of another nomadic people, the Luri.

The dosemealti rugs generally use one of two field designs surrounded by borders with repeating geometric motifs: 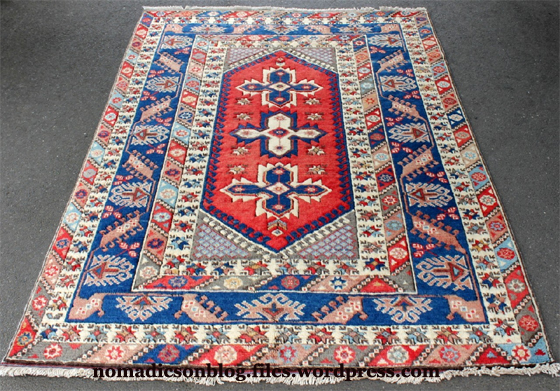 Both of these common field designs are contained within a border of hexagonal shapes making them double-ended prayer rugs. Variants of these two types of fields can also be found. 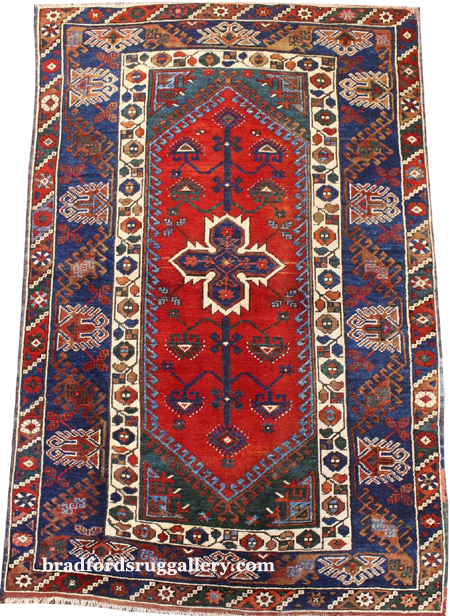 Multiple wide borders make up the remainder of the rugs. These contain many motifs representative of the nomadic lifestyles of the weavers. These include the tree of life, scorpions, and camels.

These rugs are often woven with scorpion symbols to ward off deadly animals. The camel, a helpful beast of burden signifies a blessing. Other motifs include other animals or humans in geometric shape. Altogether, the different motifs in the rugs provide order and harmony.

One interesting repeating motif which usually appears as the last border around the rug but can appear in any other border, are 5 repeating diagonal dots. These may represent the 5 daily calls to prayer.

Another repeating motif, sometimes referred to as an elephant's foot is common to these rugs:

Dosemealti rugs feature a wide range of colors. These frequently include a harmonious color arrangement of strong reds and blues and warm greens. White (symbolizing purity) is also a significant color in these rugs.

The Dosemealti oriental rugs come in a variety of sizes.

Since the residents of the villages in the Dosemealti region of Turkey have been able to stay true to their traditional weaving, the rugs are still popular and continue to be successfully woven for the oriental rug market today.

The field and border design and all wool structure are sure indicators of the Dosemealti origin, making it relatively easy, even for the novice, to recognize. 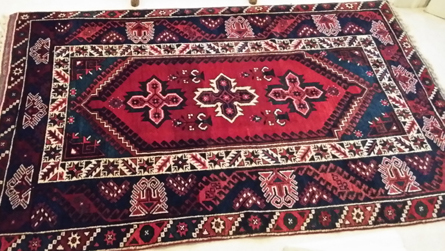 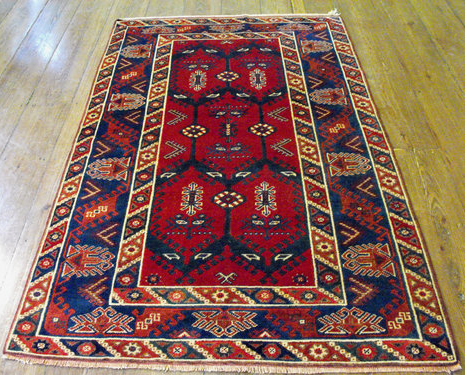 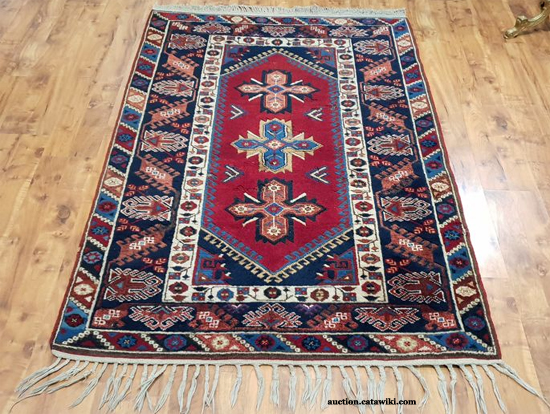 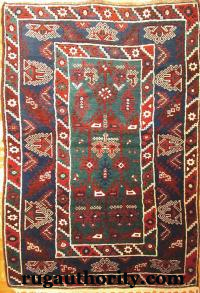 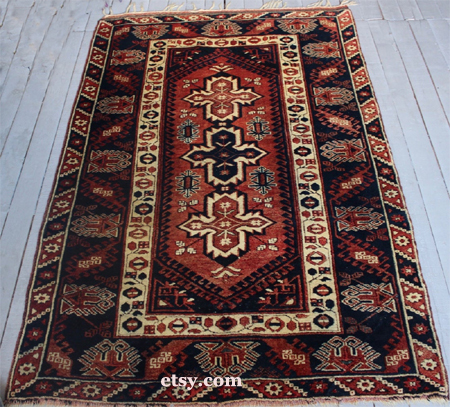